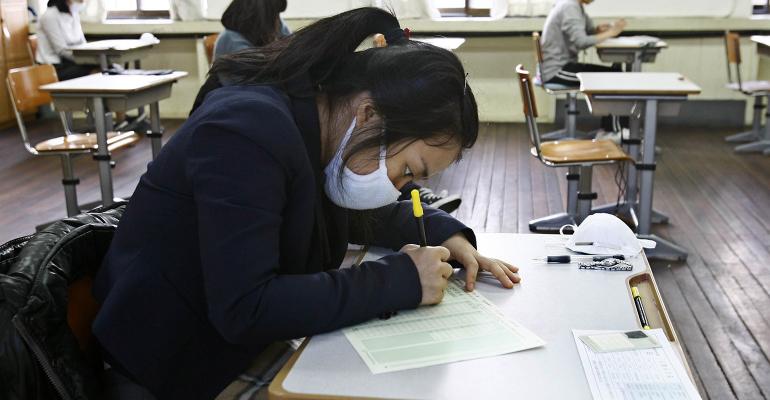 Getting Into Elite Colleges May Just Have Gotten Easier

Many elite colleges and universities are not requiring the submission of SAT or ACT scores for the 2021–2022 admission season.

In case your clients with teenagers don’t already know, the barrier to getting accepted into the nation’s elite and highly selective colleges and universities has gotten less formidable.

Thanks to COVID-19, many elite private colleges and universities, as well as public ones, are not requiring the submission of SAT or ACT scores for the 2021–2022 admission season.
More than 60 of the “top 100” national universities, as ranked by U.S. News & World Report, won’t demand test scores from applicants for at least a year.

In addition, nearly 85% of the “top 100” liberal arts colleges, as ranked by U.S. News, now have test-optional policies. The most selective schools that have changed their policies include Williams, Amherst, Swarthmore, Wellesley, Pomona and Middlebury colleges.

Overall, more than half of the 3,330 four-year colleges and universities in the country will not require applicants to submit test scores for the 2021–2022 admission cycle.

In recent years, the trend toward schools becoming test-optional has been strong, but the pandemic accelerated the move. Because of the health crisis, ACT Inc. and the College Board, which administers the SAT, had to cancel some testing dates. This threw teenagers into a panic about when they would be able to sit for one or both of the standardized exams.

This summer, the College Board said it has experienced “unprecedented volume” from students trying to register for fall testing dates.

The two testing giants plan to hold the tests in the fall, but no one knows if they will be able to pull that off. The College Board had said it was going to develop a digital, at-home SAT test for the fall, but it later announced it had abandoned the idea.

What complicates an already nightmarish situation is the College Board and ACT Inc. don’t have their own testing sites. They have to depend on school facilities and individuals, like high school principals, to determine whether it’s safe enough to host the testing events.

The alpha dog that helped fuel the test-optional momentum this spring was the University of California system, which includes several of the most highly regarded public universities. The UC Board of Regents voted in late May to make the nine campuses for undergraduates test-optional for the 2021–2022 school year. For freshmen entering in 2023 and 2024, the system will be test-blind, which means tests won’t be used for admission decisions for California residents. By 2025, the university system plans to offer its own entrance test, and if one hasn’t been developed, the system will eliminate standardized testing for admission.

Higher-ed institutions have approached the testing issue in different ways. Some schools announced they will be test-optional only for one year because of the lack of testing opportunities. Schools that fit into this category include all of the Ivy League institutions, Northeastern University, New York University, and Williams and Pomona colleges.

Some institutions are conducting a two- or three-year pilot, including Cooper Union, College of William and Mary and Fordham University.

It’s likely the majority of schools that are trying out the test-optional route on a pilot basis will ultimately make the move permanently.

Many other schools have announced they will make their test-optional policy permanent.

So who will benefit from this test-optional phenomenon?

Pre-pandemic, the most common explanation that admission administrators gave for adopting a test-optional policy was to create a more diverse student body. That’s because overall, SAT and ACT scores are highly correlated with the educational attainment of parents and income.

The thinking has been if testing is eliminated as an admission barrier, first-generation and minority applicants will enjoy a greater chance of entry at selective colleges.

Research has suggested this isn’t necessarily what has happened.

Peer-reviewed research from a few years ago suggested schools that adopted test-optional practices weren’t increasing their diversity numbers any more than their peers that still require the tests for admissions.

In the research, Andrew Belasco, the CEO of College Transitions, a college admissions consulting firm and a Ph.D. recipient from the University of Georgia’s Institute of Higher Education, looked at 180 liberal arts colleges including 32 liberal arts colleges that were test-optional at the time. The gains in enrollment of minority and low-income students were no different from the institutions that mandated the SAT and ACT.

“Our findings suggest that test-optional admissions policies as a whole have done little to meet their manifest goals of expanding educational opportunity for low-income and minority students,” Belasco said when the research was released.

What the research suggested did happen was give affluent students with suboptimal scores a better chance of gaining admission to schools that would have normally been out of reach. Colleges love high-income students and they love them even more if they don’t come with mediocre tests scores that would drag down the institution’s standardized test averages.

What colleges that switched to test-optional admissions have experienced in the years leading up to the pandemic is the appearance they are more selective. Students, who don’t do well on the test won’t submit their scores, so those scores can’t be recorded in the institution’s published ACT and SAT score averages. This will artificially make the school look like they have attracted smarter students.

One thing your clients should check is whether an individual school’s merit awards will require the submission of test scores. Before the pandemic changed the college admissions world, applicants who didn’t submit test scores weren’t eligible for some or all awards at some institutions.