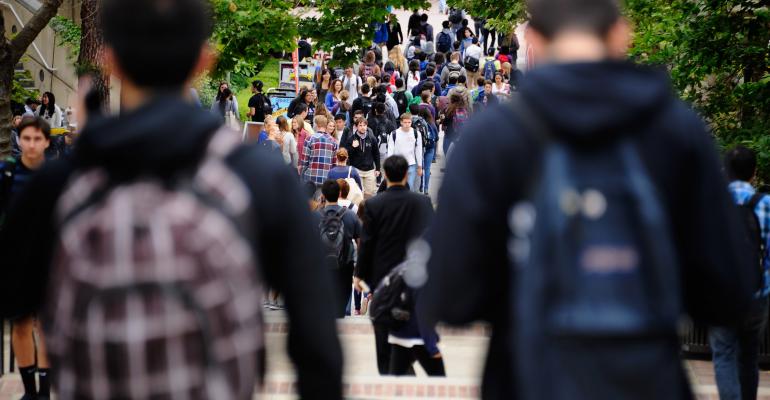 Financial advisors succeed by demonstrating to the most qualified prospects why he or she is more client-oriented, education-centric and better informed than the competition.

Amy, 49, and Brian, 52, of Palm Beach Gardens, Fla., were both dissatisfied with their financial advisor, but until the mailer came they couldn’t articulate why. The mailer made it clear: Their advisor may have been advising them, but he wasn’t educating them.

“It was a real ‘aha’ moment for us,” Amy Gabriel says. The Gabriels had ignored dozens of snail-mail solicitations for dinner seminars promising the same kind of information for free because they usually came from financial services firms, and they dreaded the hard sell that would follow, she said. This one was different.

“We both agreed that since it was sponsored by a well-respected college, we could expect objective information,” she said.

They paid the $50 fee to attend the six-hour course, held over two evenings at the college.

What the Gabriels didn’t realize is that the brochure only appeared to come from the Palm Beach State College registrar’s office. It was in fact prepared and mailed at the expense of the Blatt Financial Group. Peter Blatt, a registered investment advisor in Palm Beach Gardens, has for a number of years been the exclusive instructor for the college’s Retirement Planning Today class. While the course material is straightforward and not a direct marketing pitch for his firm, he uses the opportunity to meet prospects and has won a number of clients out of the classroom.

The class is offered through the public school’s Corporate and Continuing Education department, which has a mandate to offer a number of classes that appeal to nontraditional students. Blatt’s course on retirement planning sits next to dozens of others in the college catalog covering a broad array of topics, from the basics of digital photography to sign language.

The $50 per couple registration fee goes to the college. Blatt waives the small stipend instructors are paid in exchange for the college agreeing not to offer similar classes taught by others.

The college’s Corporate and Continuing Education department vetted Blatt’s mailers, as well as the material he presents in class, to ensure it meets the educational standards of the school and wasn’t biased or solicitous.

But while the material itself is purely educational, the agreement with the college was Blatt’s first step in a well-considered investment to cultivate new clients. For him, it beats the dinner seminar, the lunch-and-learn series, the sponsored radio program and certainly the dreaded cold call.

To find where that line between pure education and self-promotion was drawn, I attended Blatt’s class last month. The teacher and students met in a well-appointed, modern classroom at the college from 6:30 to 9:30 pm. Most of the two dozen or so attendees appeared to be in their 50s and 60s.

At the first session, Lauren Linn, the marketing coordinator for Blatt Financial Group, introduces Blatt with a flourish. Having someone else introduce the presenter subtly changes the dynamic in the classroom. It instantly communicates that Blatt isn’t just a lonely practitioner but has significant resources behind him. It also spares Blatt the embarrassment of touting his own credentials.

Linn distributes a three-ring binder with half of the course contents. If attendees want the other half, they will have to return for the second night. Experience has taught Blatt that a third of the class will not bother coming back.

Blatt is tall and lanky with a runner’s frame. He is surprisingly soft-spoken and the class quiets as he starts to speak. He is rehearsed and keeps his eyes on the students, never glancing at the PowerPoint presentation running on the screen. Wasting no time on preliminaries, he quickly reviews concepts such as retirement expectations, historical inflation rates, purchasing power and sources of retirement income. The second class focuses on investments, risk management and estate planning.

Drinking from a Fire Hose

The content comes fast. Some students struggle to keep up. Blatt welcomes questions and offers the occasional joke to keep things light, but glances relentlessly at the clock. The pace of information is akin to drinking from a fire hose.

First impressions lead me to conclude that the program tries to pack in too much information. But as I go over the workbook later that night, ready with a red pen to eliminate the fluff, it’s not clear that any of it is superfluous. The curriculum may well be better served by nine or even 12 hours over three or four meetings, instead of the six hours over two meetings allotted to it.

Between classes, I interview five students who had taken previous Retirement Planning Today programs. All five had a few things in common. They knew that with retirement looming, they felt they weren’t educated enough about it. Three of them worked with advisors, and all three were dissatisfied.

“We were questioning the relationship [with their existing advisor] even before registering for the course,” notes Chris Cox, a real estate broker with Palm Beach-based Douglas Elliman. “We weren’t naive,” she adds. “We assumed that there would be an opportunity to hear about the instructor’s services, but we felt that the college would keep the focus on genuine education and protect us from the hard sell.”

The attendees signed up for Blatt’s class because they wanted more education than their advisors were offering. Those advisors may blame Blatt for poaching their clients, but the truth is they lost them some time before the class began.

The two non-advised investors I talked to also wanted more education but never felt comfortable discussing finances with outsiders. Originally from Connecticut, George Viola, 53, works as an engineer and has always been a self-directed investor. “I didn’t go into this class thinking I’d create a relationship with the instructor, but as I got to see him [Blatt] over six hours, a level of trust was established,” he says.

Even after taking advantage of Blatt’s free one-on-one consultation, he didn’t jump on board immediately, but gradually transferred more and more of his investments to Blatt’s management. When I was there, Viola was seeking Blatt’s help with establishing a trust and buying an annuity.

Danny Mroz, a retired salesman, took the class with his wife, Sheri. Mroz describes himself as a very private person. “I receive a handful of invitations every week for seminars and meals from financial advisors. I just wouldn't be comfortable attending anything like that,” Mroz says. “They are trying to buy my business instead of earning it. But the college class was different: I paid for the course and felt the college would guarantee real value,” he continues.

Mroz was pleased with what he learned, for instance, the fact that he could roll over a 401(k) either partially, or fully, into an IRA. “Sheri and I talked after the first class and agreed we needed someone smarter than just me to guide us,” he says.

Does the program work? Yes. Executed well and with the right educational partner, an advisor can do well by promoting and teaching adult education courses in retirement planning, investing, insurance and annuities, or whatever specialty they wish to promote. But the up-front investment is considerable and would probably represent a stretch for many independent advisors. Besides the significant investment in the time required to prepare the materials and teach the class, Blatt had to pay considerable up-front marketing costs.

Blatt spent a total of $20,395 before the class began. This included the costs of printing a three-ring binder workbook for each student and of preparing and printing an eight-page marketing piece, renting a mailing list and paying postage.

One point is non-negotiable: The advisor must promote the program. To make the program cost-effective, the advisor must get a dedicated marketing piece into the hands of people who are qualified by age, income and geography. The college’s own marketing efforts will not result in a critical mass of the right kinds of registrants.

But as Blatt’s numbers demonstrate (see sidebar 1), teaching an adult education course on retirement planning works. In 2015, Blatt’s courses attracted 79 couples or individuals. Of the 46 who met with Blatt for a free one-on-one consultation, 28 converted to clients, bringing with them assets under management of over $12 million. Blatt calculated that for every dollar invested in the program, he got a $5.46 return.

Financial advisors succeed by demonstrating to the most qualified prospects why he or she is more client-oriented, education-centric and better informed than the competition. And there may be no better way to differentiate than by spending six hours or more with a group who has demonstrated their motivation by paying $50 to be in the company of the advisor in the role of educator.