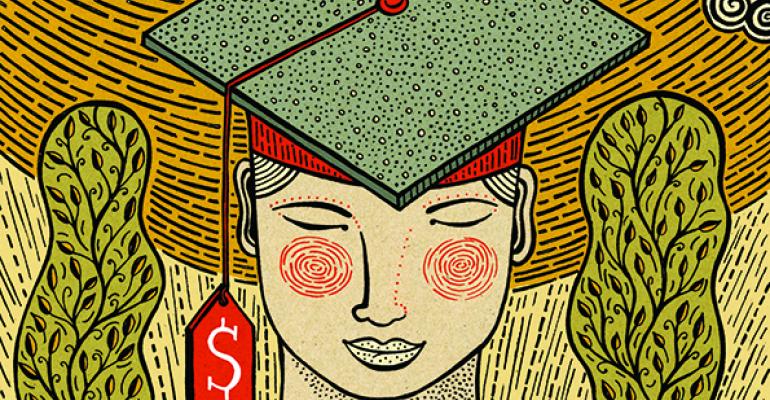 The Costs and Effects of High Tuition

Advisors can save clients money and stress when a child wants to pursue a costly college degree.

Parents want the best for their children, and that’s never more evident than when it’s time for the kids to head off to college.

But overpaying for tuition and living expenses can be a waste of money, and can even endanger clients’ financial security and retirement plans. Advisors can diplomatically help clients and their children get the degree the kids need at a cost the family is willing and able to pay.

Many specialty and selective private schools are charging even more. Busi-ness Insider recently published a listing of 50 colleges in the United States that cost $60,000 or more per year to attend, including Harvey Mudd, New York University and Columbia.

Sometimes private colleges will offer scholarships and assistance that can reduce the net cost and bring it closer to the price charged by a school with a lower
“sticker” price.

But in many cases those inducements aren’t guaranteed for the entire four years. And if the subsidies disappear, it can be very difficult to talk a happy sophomore into transferring to a less-expensive school for her remaining years.

The expense of a pricey private or out-of-state public school desired by the student is easier to accept if there is a consistent, demonstrated benefit to paying the higher cost.

But a 2013 study of almost 1,500 higher education institutions conducted by the website Payscale found that the lifetime earnings and return on investment (i.e., the cost of the education) for a graduate was usually more dependent upon the major chosen by the student, rather than the general cost of the institution in question.

Certainly a more-expensive private or out-of-state school might provide greater access to professors, a unique specialized program, or better weather than a lower-cost in-state public university. But unless the family is well-off, the extra $50,000 to $100,000 paid for these luxuries might not be worth it.

Clients who are hesitant to squash their children’s expensive higher education aspirations might get some strength from seeing how it would hinder their own financial future.

For instance, say a 50-year-old couple has to spend an extra $25,000 per year paying for their college freshman’s next four years at school. If that money would have instead been invested at a hypothetical 5 percent per year, they would have accumulated about $182,000 more by age 65.

Their annual tax bills incurred while the kid is in school could also be several thousand dollars higher if the clients use money for higher education expenses that would have otherwise been deposited into a pretax retirement plan.

If you and the parents can’t convince the teenager to settle for a more sensibly priced school, they can test his conviction by compelling him to add some proverbial skin to the game.

They should inform the child that they can pay a certain annual dollar amount towards his education (say, $15,000). He is then free to enroll wherever he can get accepted, but any cost incurred beyond the parents’ contribution will be his responsibility.

If that doesn’t deter him, you might want to show them (and him) how much money he will have to borrow to pay his share of the cost of his dream school, and the damage the loan payments will do to his post-graduation discretionary spending (assuming he has employment and income).

Even if he gets a job and can afford to make those loan payments, the debt will likely negatively affect his credit score and ability to borrow money in the future.

Another way parents can dissuade a student from choosing an overpriced school is to discuss now what she wants to do after she earns her undergraduate degree, and why they might be more interested in helping with those future expenses. If she is planning on attending graduate, medical, business or law school, she might be convinced to spend less on her undergraduate program, so that there will be more money available for that advanced education.

Or upon graduation she might be planning to move to a relatively expensive city, without the employment and income (at least initially) necessary to afford to live there.

Looking further into the future, she might have dreams of a big wedding, buying a house, or starting a business that the parents would prefer to subsidize, instead of putting every extra penny towards college tuition, room and board.

Families with kids heading off to school this fall should fill out the FAFSA financial aid application as soon as possible, available at fafsa.ed.gov.

The process will help generate the “Expected Family Contribution” figure that will then determine the type and amount of financial aid that might be awarded if the student attends a particular school.

Once armed with that information, they can visit college cost.ed.gov to compare the gross and net costs of thousands of public and private, profit and not-for-profit two- and four-year institutions.

Hopefully, the student will see that it’s possible to get a very good education without spending a quarter-million dollars. And if not, sign him up for a remedial math class.