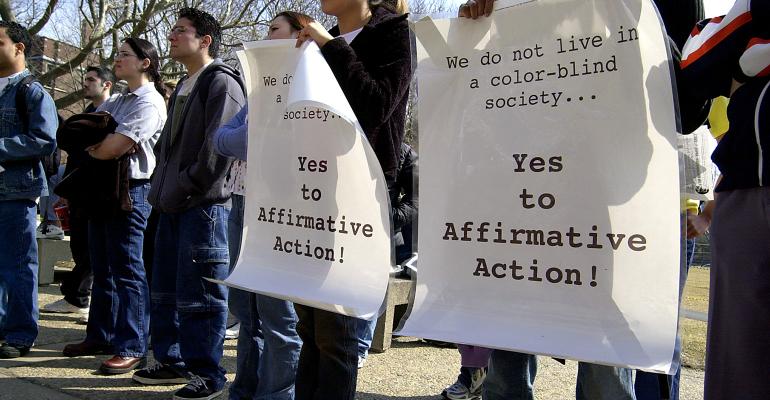 The biggest beneficiaries of college admissions practices are wealthy students of any background.

Affirmative action in college admissions returned to the news recently when the Trump administration expressed interest in taking a look at the practice.

Affirmative action is a touchy subject no matter what side you are on, but it’s important for clients to understand that the biggest beneficiaries of college admissions practices are wealthy students of any background.

Here are seven reasons why high-income students have a leg up:

With the number of teenagers continuing to shrink, private and public colleges are aggressively pursuing affluent teens by offering merit scholarships.

You can take a deep dive into this trend by reading a New America Foundation study that examines why state universities are recruiting these coveted students.

First, the competition among state flagships is so fierce that schools need to offer merit awards to affluent students or risk losing them to their competitors.

And second, U.S. News & World Report rewards universities for attracting students with higher test scores, even though the SAT/ACT results are highly correlated with income.

Students who apply through early-decision applications enjoy greater admission odds at many highly selective and elite colleges that use this option. When students apply early decision, they promise to attend a school regardless of the package of financial aid or merit awards they might receive.

Rich students can afford to make this commitment in advance because their parents can cover the cost even if they don’t receive a scholarship. In contrast, most students need to apply to a variety of colleges to see what offers come in.

Colleges employ this strategy to improve their admission yield by locking up what can be a hefty portion of their freshman class early.

Here are some examples of the admission advantage that students enjoy by applying early:

According to a study by the Jack Kent Cooke Foundation, high-performing, low-income students are only half as likely to apply early as high-income students.

Nearly three-quarters of research universities and nearly all liberal arts colleges give preferential treatment to children of alumni. These accepted students, who are primarily affluent and white, routinely have lower grade-point averages and test scores than other accepted students.

Only a tiny fraction of colleges accept all students regardless of their financial need. The vast majority of private colleges do look at the financial ability of some of their students to pay, which is a practice that favors wealthy students.

Following what’s called a need-aware or need-sensitive admissions practice, schools will accept a certain percentage of applicants without worrying about their ability to pay. But after a certain percentage of the freshman class has been selected, they accept affluent students, who aren’t as qualified but don’t require need-based aid.

Back in 2009, The New York Times published a story about the need-aware policy at Reed College in Portland, Oregon. When the financial aid office discovered that the admissions office had accepted too many students who required financial help, the elite liberal arts college ultimately took more than 100 students off its admissions list. It replaced these teenagers with less-qualified, full-pay students.

The article triggered a tremendous outcry from readers, but what the article didn’t relay is that this sort of practice is routine at colleges across the country.

One way to boost admission at many colleges is for teenagers to demonstrate that they are truly interested. According to a survey from the National Association for College Admission Counseling, half of schools consider interest in their institutions as having considerable or moderate importance in the admissions process.

There are many ways that teenagers can show their interest in a school, including asking for marketing material, following a school on social media and talking to an admissions representative at a college fair.

A new study, however, suggests that the most powerful way to express interest is to visit a campus. According to the researchers, teenagers who visit and then apply to highly selective colleges are up to 40 percent more likely to receive an acceptance letter than comparable students.

College visits that require airfare, hotels and a rental car can be prohibitively expensive for families that aren’t well off.

Grade-point averages are a major factor in college admissions decisions. A study released in the summer concluded that grade-point averages in high schools have been increasing. Over the past two decades, the average GPA has risen from 3.27 to 3.38.

When researchers looked closer at this trend, they determined that the schools that experienced the greatest gain were ones that wealthy students attended. The average GPA at these schools was 3.56. In comparison, schools where mostly minority students attended had the lowest GPA (3.14).

The college admission process can be intimidating and bewildering. College consultants can assist families through the process by helping with such things as creating a college list, providing advice on college essays and SAT/ACT strategies, and completing the applications.

But most families can’t afford to hire these professionals. They must depend on high school counselors, who are typically overwhelmed and—strangely enough—not trained in any aspect of college planning.