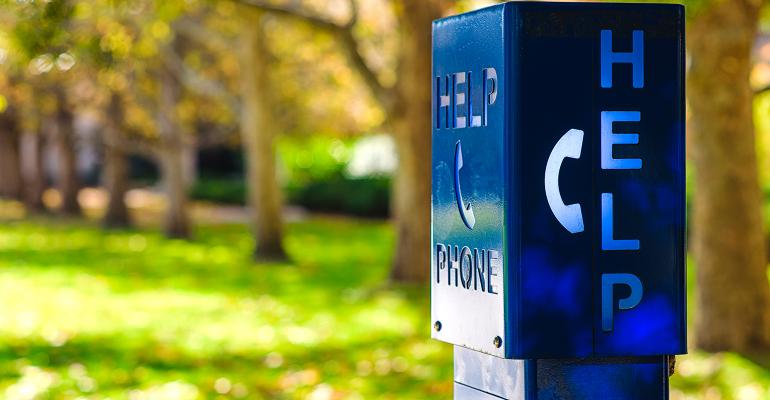 Some schools consider grade point average and test scores as the most important factors. For others, it’s a student’s essay, recommendations and extracurriculars.

This is the time of year when high school teenagers across the country are stressing about their chances of getting into their favorite colleges. But despite media accounts, which tend to focus on the most elite universities, it’s not that tough to get into college.

According to the National Association for College Admission Counseling, which is a major source of admission figures, four-year colleges and universities recently accepted 66.1 percent of applicants, which has been inching up slightly in recent years. On average, private colleges accepted 64.4 percent of its applicants, and the acceptance rate at state universities was 69.5 percent.

As for the most prestigious schools, the College Board calculated that only 3 percent of colleges and universities spurn more than 75 percent of their applicants.

There are ways to increase an applicant’s chances of success; here, we focus on the factors that schools care most about.

The Most Important Admission Factors

A student’s grade point average in college-prep courses is the top factor in admission decisions. Schools are not only going to note the GPA, but also the strength of the curriculum.

Another significant factor is an applicant’s ACT and/or SAT test scores. Hundreds of schools, however, no longer require test scores. You can find the entire list at FairTest.org, which advocates against standardized testing.

Beyond GPA, strength of curriculum and test scores, these are the next most important admission factors, according to NACAC:

Schools will differ in what they care about and how many admission factors that they even examine. For example, the admission offices at state universities, which can receive tens of thousands of applications, don’t have the bandwidth to examine each applicant in-depth. Consequently, many public universities are chiefly interested in a child’s grade point average and test scores. State universities will often not care about whether a child shows interest in their institutions and will not require recommendations or essays.

In contrast, many small private colleges are keenly interested in learning a great deal about an applicant. They are more likely to look at a candidate holistically. These schools could require an essay, recommendations and students who have solid extracurriculars and talents. They may also give a boost to teenagers who have demonstrated an interest in the school before applying which could include visiting the campus.

An easy way to determine what admission factors an individual college cares about is to head to COLLEGEdata, a popular online college planning resource.

On the COLLEGEdata website, you’ll see how important a specific college or university rates 19 admission factors, including:

Each school assigns a value to each factor that ranges from Very Important to Not Considered.

For example, here’s how the admissions department at Amherst College, a liberal arts college in Massachusetts, rates each factor: 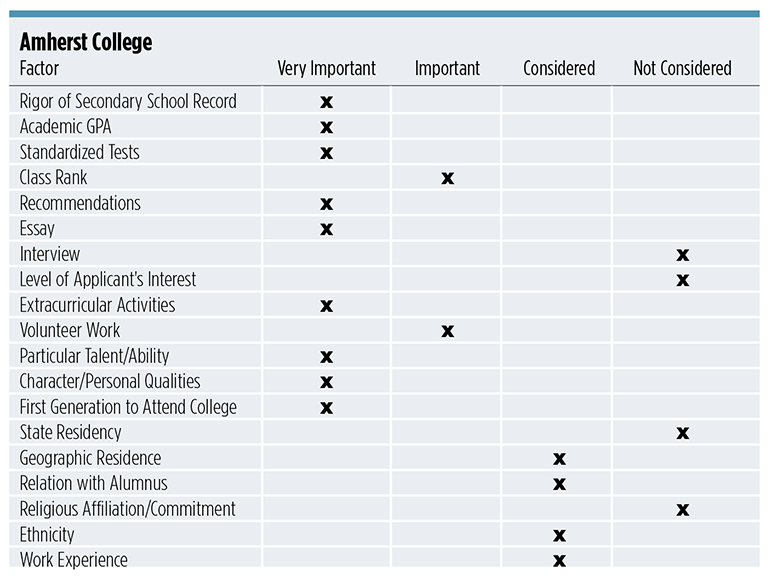 The chart illustrates that Amherst, which is a highly selective institution, is a demanding school that expects candidates to be superior in many different ways. Not only are grades, the rigor of courses and test scores very important, but so are a host of other factors including character, talents and extracurriculars.

Here are the factors that the University of California, Berkeley, uses to assess applicants: 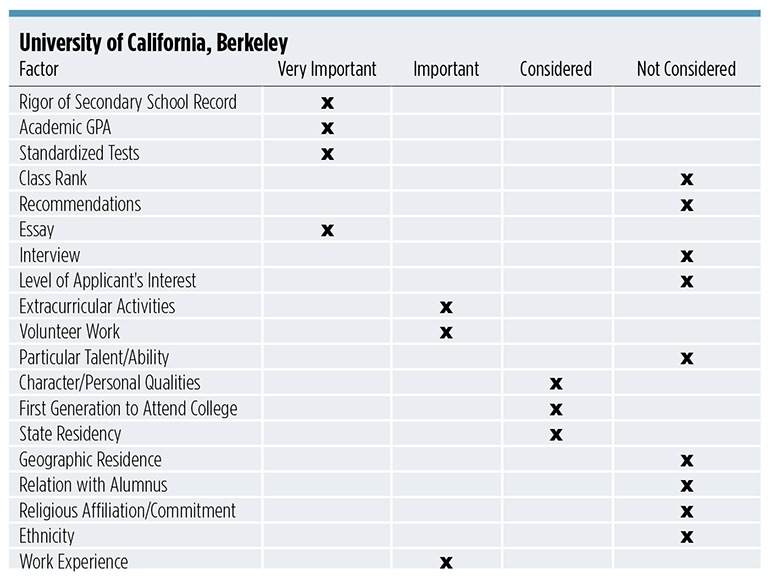 The chart shows that UC Berkeley cares deeply about a student’s GPA, strength of courses and test scores, which is not surprising. What should jump out to any potential applicant is how highly the flagship university, which rejects 83 percent of its applicants, cares about the essay requirement. This makes sense because Berkeley and other highly competitive University of California campuses such as UCLA and UC San Diego are deluged with applications from highly qualified candidates. The essay can serve as a tie breaker to distinguish among stellar applicants.

It can be equally illuminating seeing what Berkeley or any other university doesn’t care about. For instance, Berkeley doesn’t ask for recommendations or offer interview opportunities and doesn’t care about the level of an applicant’s interest. In other words, a student would gain no brownie points for visiting the campus.

Berkeley also doesn’t consider a relation with alumnus. Giving an admission boost to legacy candidates is a controversial and common practice among many elite private schools on the East Coast.

Where the Data Comes From

COLLEGEdata’s admission factors are pulled from each school’s yearly Common Data Set. Colleges and universities all over the country voluntarily generate an annual Common Data Set that provides statistics on a variety of admission topics. Usually you can find a school’s Common Data Set by Googling the term and the name of the school.