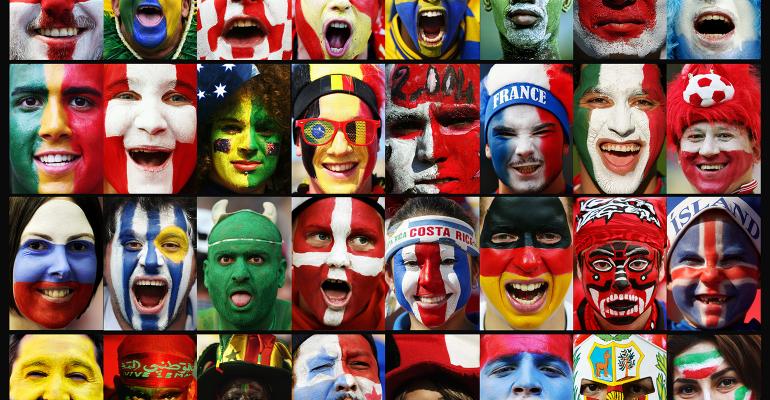 Advisors need to reach out to next gen clients. For the next month, next gen will be talking World Cup. Here’s a primer for advisors.

Globally, there is no sport more popular than soccer, yet for many Americans it’s a sport that’s somewhere between curling and rugby, fun to watch but with enough strange rules and foreignness that it doesn’t really strike a chord. It might stand to reason that since the U.S. is not even in the 2018 FIFA World Cup, no one cares about the games starting Thursday.

You did know the games start on Thursday, right?

Even if you aren’t a fan, soccer can be a lot of fun to watch. And with an increasing number of young adults paying attention to the sport, the World Cup might be an opportunity for you to grow your business. The children are our future.

First, some numbers: American millennials are more likely than their older counterparts to be soccer fans, both of the U.S.’s own Major League Soccer and international leagues like the English Premier League. In the U.S., just 22 percent of aged 45 to 54 are “interested” or “very interested” in soccer, but indicators of popularity more than double among those aged 25 to 34, according to a Nielsen survey. With the median age of advisors hovering in the upper 40s, learning how to speak to younger prospective clients using the global language of soccer, or “football” as it’s called most everywhere else, could be the key to forming some great relationships with the next generation.

To help advisors connect with younger clients during the World Cup, we’ve boiled down some pointers from the game’s fanatics. Don’t brag about how the U.S. men’s national team is going to win the 2018 World Cup. Sadly, they didn’t qualify and won’t be playing in the tournament.

There are no touchdowns. Wrong “football.”

Barcelona is not going to win. This is a tournament between national teams. Although plenty of European club players represent their home countries, there will be no matches between league-level soccer clubs.

There is no next year. The World Cup happens every four years. The 2014 tournament was held in Brazil, where Germany beat Argentina 1-0. South Africa hosted the 2010 tournament, which also featured a 1-0 final score as Spain bested the Netherlands.

You will have plenty of time to talk about the World Cup. Games are played from June 14, between Russia and Saudi Arabia, all the way to the final, scheduled for July 15th. Start with a visit to the pool. The opening stage of the tournament consists of round-robin matches in eight groups, or pools, with four teams per group. Points are tallied after group play to determine the winners and runners-up for each pool. A win is three points, a tie is one point and a loss is a zero.

Want to sound smart? Start a debate about the “Group of Death,” the group with four evenly matched teams. Is it Group F, with Germany, Mexico, South Korea and Sweden hoping to advance; or maybe Group C, with France, Denmark, Peru and Australia vying to move into the tournament’s next stage? Remember, just two teams from each group can advance and a debate like this only makes sense during the group play.

Win or go home. After the last match of the group play, it’s time for the bracket stage of the tournament. With the tournament’s 16 advancing teams decided by the end of June, each team gets 90 minutes of play to see who advances. Ties lead to a 30-minute overtime, and ties after overtime lead to heart-pounding penalty kick shootouts. Oh, and don’t forget stoppage time. What’s up with the haircuts? If you still don’t have a handle on the ins and outs of the game, there’s nothing to worry about. Try picking a team to follow or a player who’s haircut stands out. Underdogs Iceland and Panama are both in their first World Cup tournament, ever. Colombia was known for the team’s dance moves in 2014 and Egypt’s Mo Salah has electrified fans around the world (his cleats were displayed earlier this year with the British Museum’s Egyptian collection).

Time to get paid–or not. Players won’t make much money on their national teams, at least when compared to salaries offered in high-caliber leagues around the world. Players on the 2014 U.S men’s national team, according to Sports Illustrated, were paid a minimum of $76,000 from the U.S. Soccer Federation, the United States’ soccer governing body and a FIFA member. Compare that with the earnings of one of the team’s players, Clint Dempsey, who made $6.7 million playing for Seattle that same season. For some young players on the cusp of a big break, however, the World Cup is a stage to show what they’ve got and make a play for a big payday. Soccer’s not going away. In fact, the 2026 World Cup final will be played right here in the United States. The U.S., along with Canada and Mexico, put in FIFA’s first winning joint bid. The U.S. will host 60 games, while Canada and Mexico will get 10 games each. The last time the U.S. played host was 1994, while Mexico hosted the World Cup in 1970 and 1986.

Keep an open mind. The World Cup is a way for soccer fans and casual observers to come together every four years, inspiring pride and bridging differences.