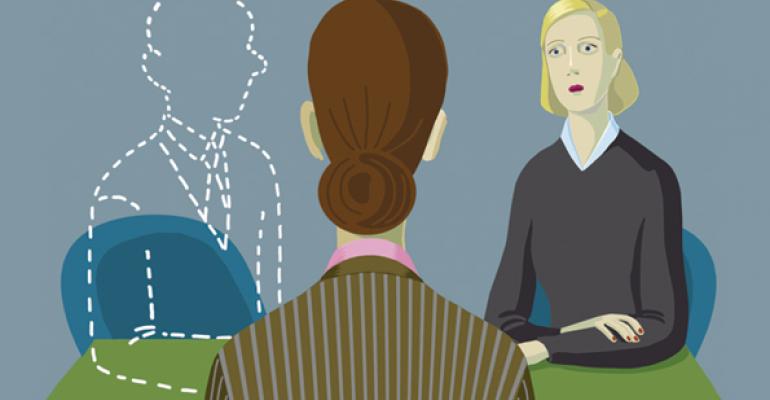 Suddenly single clients can turn into a goldmine or a landmine, depending on how you handle the situation.

Consider Stephanie Kelly. About eight years ago when she was starting out in the business, Kelly was faced with a new client who had recently and suddenly lost her husband. Overwhelmed with grief, the woman wasn’t able to deal with financial issues rationally. In particular, she refused to sell a position that was a clear money-loser. Kelly tried to push her to get rid of the fund, but the woman ended up leaving her for an advisor her husband had used.

Afterwards, Kelly, an advisor with Saunders Kelly Acheson Wealth Management of Raymond James & Associates in Portland, Ore., reassessed what had happened. For the client, the mutual fund was much more than a financial holding. It felt like a connection to her husband.

Since then, Kelly has become an expert in the intricacies of working with suddenly single clients, developing a lucrative specialty advising divorced or widowed women. “In these situations, you’re dealing as much with emotional advice as the nuts and bolts of their financial picture,” says Kelly, who has about $76 million in assets. “I never lose sight of that.”

Under the best of circumstances, money is an emotionally-loaded issue. But when someone unexpectedly loses a spouse or goes through an unanticipated divorce, the problem is multiplied—exponentially. Even financially savvy people can find themselves unable to cope and make sensible decisions. For the financial advisor, then, dealing with this client demands a mix of patience, handholding, education and gentle prodding. Do it wrong, and you may lose business. Do it right, however, and you can find yourself with a loyal clientele.

There are differences between working with someone in divorce and someone who is dealing with a spouse’s death. One consideration is the ongoing relationship a divorce requires, especially if dependent children are in the picture. In that case, the client not only has to work out a distribution of assets with the ex-spouse, but also, “You have to stay involved with that person no matter what your feelings are,” says Michelle Smith, CEO of Source Financial Advisors in New York, who specializes in issues related to divorce.

In many ways, the issues are similar. For example, in both situations, it’s best to keep meetings short. “When someone has gone through a loss, their attention span is very short,” says Cindy Conger, who heads Conger Wealth Management in Little Rock, Ark. “Talking about complex ideas over a long period of time isn’t going to work.”

Conger suggests ensuring that meetings go no longer than half an hour. At the same time, you need to keep your emotional antennae active—always. Some meetings may require more listening than talking; at other times, it may be best not to meet at all.

From Rash Decisions to No Decisions

In any case, one common reaction is a tendency to rush into rash decisions. For that reason, it’s best to avoid making major changes—from overhauling a portfolio to moving out of a home—for six months to a year. “If you have to sell, sell just enough to get you through that period of time,” says Conger. She advises putting aside money in a separate account, walled off from other investments, that your client can dip into. To convince her clients to do so, Conger runs models showing the long-term consequences of taking certain actions. “It usually changes their mind,” she says.

“It’s our job to present all the issues to the client,” says Dave H. Hajek, senior vice president of investments at Holistic Wealth Advisors, an Indianapolis-based Raymond James & Associates practice with $240 million in assets. “But ultimately, the decision is their call.”

Rash decisions may involve the client’s home. In some cases, that can mean a desire to sell and escape what Conger calls “the sadness in the house.” Other times, it’s an inclination to hang on, even when doing so makes little financial sense.

Hajek points to a recently divorced client who insisted she keep the house and live there with her children. He advised the woman to let her husband have the home, so she wouldn’t be saddled with an illiquid asset that would come with heavy expenses. But the woman feared her children would prefer spending their time with their father in familiar surroundings. Eventually, the client agreed to Hajek’s plan.

In some cases, clients can become paralyzed, unable to take action at all. Conger recalls a long-time client who lost her husband several years ago. Usually a highly organized, financially savvy woman, she fell apart, even losing the ability to gather the documents Conger needed to file an estate tax return. In the end, Conger had to visit the client at home and retrieve the papers herself. “I dug through a pile of stuff on a four-foot square coffee table that she hadn’t been able to deal with,” she says.

To rein in clients unable to choose a course of action, Justin Reckers, director of financial planning at Pacific Wealth Management and managing director of Pacific Divorce Management in San Diego, uses a white board for writing down all the possible options. When he guides the client through a kind of brainstorming session, he can usually help people find a reasonable path.

Reckers recalls one client who went through a divorce from a man with whom she had started a business. The company was valued at $17 million, but she was loath to cut herself off completely from an enterprise she had helped found. And if they kept the business going, perhaps it would be worth much more someday.

To help the woman evaluate her options, Reckers turned to his white board, jotting down the possible scenarios. With that exercise, the client was able to see that the most sensible choice was to sell her share of the business.

Things can get tricky when newly single clients seek the counsel of friends and family members, who may not be aware of all the details. To make sure a client and adult children are on the same page as she is, Kelly often holds family meetings to review investments. “Those are the people the client looks to as her support network,” says Kelly. “I want them all in the loop.”