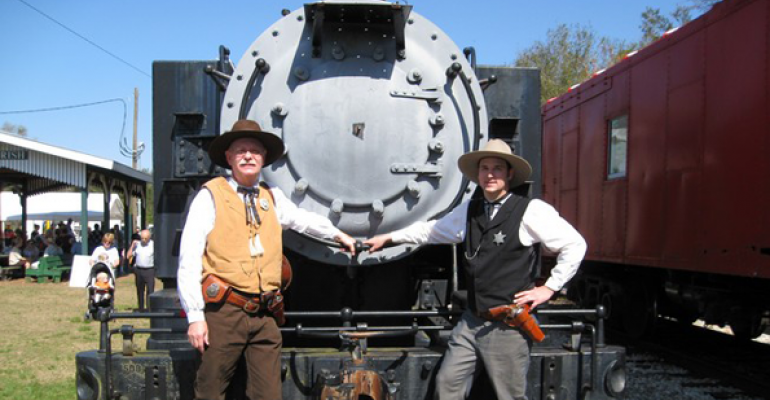 At the Junction of Work and Play

Florida-based financial advisor Jim Zientara has four business cards. One is the typical Raymond James card. A second Raymond James card is printed on light green cardstock that serves to highlight Zientara’s focus on women investors and sustainable investing. “It’s good for you, your family and your world,” the card reads.

But his other two business cards introduce Zientara as “Engineer Jim” and spokesman for the Florida Railroad Museum. A volunteer for the organization for the past six years, Zientara became the spokesman for the non-profit about a year ago. The museum, which allows visitors to ride the exhibits, operates diesel-powered trips along a 6-mile track from its Parrish, Fla. location. “It’s not just the young of age we deal with, it’s also the young of heart,” Zeintara says.

Zientara spends his weekends explaining the history of the rail industry in Florida to museum visitors, as well as performing his duties as “Marshall Jim” by keeping bandits from the infamous “Hole-in-the-Head Gang” from robbing the train. The museum also offers a number of special events throughout the year, including visits from Thomas the Tank Engine and the annual holiday North Pole Express event.

As part of community outreach for the museum, Zientara often serves as a guest speaker for student presentations, area Kiwanis International chapter meetings and other group events, as well as national organizations such as the Juvenile Diabetes Research Foundation, which recently approached Zientara to help with an appreciation event for its donors and volunteers.

With Zientara spending about 15 weekends a year at the museum, his hobby is more of a second job for the busy advisor. And his enthusiasm is infectious—even clients notice. “My customers know all about me and think I’m kind of different from the average guy. And maybe I am. But who wants to be the same?” Zientara says.

Not only does his active participation in the museum differentiate him, Zientara says his work with the museum also helps introduce him to new clients while simultaneously providing opportunities to interact with existing clients in a creative way. “You meet a lot of people on the train and I’m sort of an outgoing guy,” Zientara explains, noting that even after the ride is over, potential clients recognize him around town and often stop to talk about their experience.

With 30,000 visitors riding on the railroad each year, Zientara says he’s been known to pass along his Raymond James business cards along with the “Engineer Jim” variety to guests. “But I’m not pushy, if you want to work with me, that’s fine,” he says.

A lifelong train enthusiast, Zientara’s interest stared with an American Flyer model train set purchased to run around the family Christmas tree. Later, while living in commuter in Chicago, Zientara spent an hour a day riding a commuter train back and forth as a trust officer with Continental Bank. Zientara moved to the Sarasota area with Palmer Bank and eventually enrolled in the Dean Witter ( which later became Morgan Stanley) advisor training program in 1975.

Zientara’s move from Morgan Stanley to the Raymond James Lakewood Ranch, Fla. office in 2009 coincided with the start of his volunteer work with the Florida Railroad Museum through his longstanding involvement in the re-enactment organization, the Single Action Shooting Society (SASS).

Today Zientara serves as branch manager, managing $30 million in assets for 250 households. Overall, the branch (which includes four other advisors) manages $107 million in assets and about 1,200 accounts. “When I was at Morgan [Stanley], I was a bigger producer, but I’ve slowed down a bit and let others in the office help with production,” he says, noting that it’s a bit of a balancing act between all of his activities.

Participating in the museum pays tangible dividends for his advisory practice. To encourage ridership, the board regularly gives Zientara family 4-packs of tickets, telling him to distribute them to anyone he wanted. “So we’ve been using them as giveaways at my seminars.”  And over the years, Zientara says he’s collected about 1,500 people in his email database because of the train. “I keep them informed on what’s happening,” he says.

That includes his clients. In February, 28 of his clients rode on the museum’s Murder Mystery Dinner Train, an interactive storytelling experience that served as an informal client event.

And Zientara says he never quite knows what he’ll be doing next—or what potential clients may come his way. Next month, the Glazer Family Foundation, founded by the late Malcolm Irving Glazer, a noted businessman and owner of the NFL team Tampa Bay Buccaneers, has asked Zientara to appear as “Engineer Jim” for a children’s summer camp event at the stadium.  “I’ll be rubbing elbows with a bunch of football players and all kinds of stuff,” Zientara says, excited about the opportunity.

“While being the Florida Railroad Museum’s spokesperson is play, the Raymond James Financial Advisor and Branch Manager is work,” Zientara says.

Both four letter words are equally important to him.