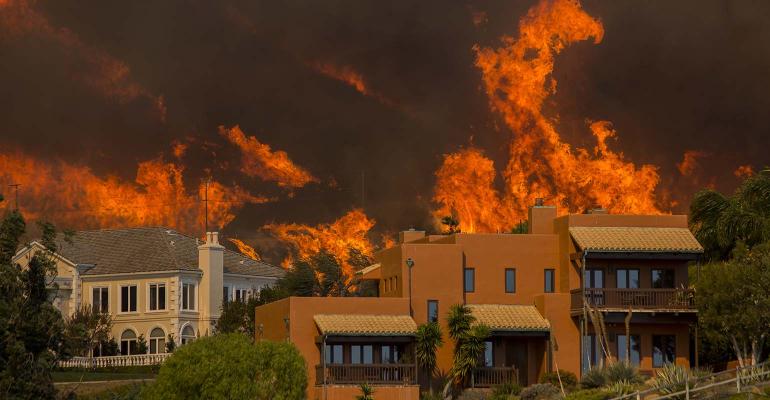 About a month ago, Christina Empedocles, a fee-only financial planner in the San Francisco Bay Area, got to thinking about how many clients were bringing up the impact of climate change on their homes. Over the past three years, she realized, perhaps 12 people had brought up the topic, usually centered on the threat of wildfire damage to their properties.

So, Empedocles got to work, creating a rubric, of sorts, with a dozen top considerations to take into account when deciding whether to move and where to buy property. Still a work in progress, she figures it’s something she’ll turn to with increasing frequency as damage from climate change accelerates. “More and more of my clients are concerned that their long-term plans for living in the Bay Area aren’t viable anymore,” she says.

Empedocles is one of a growing number of advisors finding they have to add a new element to their financial planning—how badly their clients may be affected by global-warming-induced wildfires, flooding, hurricanes or other disasters and whether adjustments need to be made to their plans, as a result. While such discussions currently are happening most frequently in places like California and Florida, they’re also coming up in plenty of other locations, as well.

One of the top areas of concern is clients’ homes—how much they’re willing to budget for rebuilding or hurricane-proofing a home, for example, or whether they want to sell or change plans to buy. While advisors say they find most clients aren’t willing to get rid of a property completely, it is happening more often, especially in cases of extensive damage. Empedocles points to clients who moved into their vacation home full time during the pandemic’s lockdown, only to have a wildfire pass by in summer 2021 that destroyed almost everything inside via smoke damage. Repair and cleaning costs came to about $40,000. After that, they put the home up for sale. “They were too afraid to go back,” says Empedocles.

Some advisors find that, while clients in such places as Florida and California aren’t nixing plans to buy, climate change questions are, nonetheless, affecting their decision-making processes. Kevin Brady, a vice president at Wealthspire Advisors, which has about $17 billion in assets, for example, says clients are taking longer to make their final decision than a few years ago. “They don’t jump into it,” says Brady, who is based in New York City. They’re also eschewing property right near the beach in favor of homes in less vulnerable locations. Brent Weiss, a St. Petersburg, Fla.–based advisor at Facet Wealth, a financial planning firm with about $1.3 billion in assets, points to a client who recently bought a house in St. Petersburg that was walking distance to the beach over another that was closer to the water.

In other cases, Empedocles says the threat of climate change damage is the trigger that motivates clients to buy a property they’d already thought about purchasing. One Bay Area client, for example, had discussed buying a home in the Great Lakes area and eventually retiring there, but never took action. Then, after the massive wildfires of summer 2020 coincided with their son starting college in the Midwestern region they loved, they decided to go ahead with the plan. Their son could live in the new place while he was in school, and, afterward, they’d rent it out until they wanted to move. “When that all happened at the same time, it pushed them to buy the property,” says Empedocles.

Property and casualty insurance is another major area of concern. A natural disaster can involve significant increases in premium costs. According to Brady, the premiums of one client in California have more than doubled in the past two years, thanks to wildfires in the area. Or it can mean finding that an existing insurance carrier won’t cover homes in a client’s ZIP code anymore or in an area where they want to move. Empedocles points to a client with a second home in Sonoma County, where a wildfire burned down many of their trees, requiring extensive landscaping and remodeling. Although they’d planned on eventually using their home to finance their retirement, they’re mulling over whether to sell now. “They’re worried they’ll lose their fire insurance,” she says. “And that would sink the value of the property.”

Thanks to insurance questions, Steve Branton, senior vice president at Wealthspire Advisors, who is based in San Rafael, Calif., now recommends that clients thinking about buying a home first talk to an insurance agent before going any further, to make sure the property can get coverage. “We want to make sure there are no surprises,” he says. He’s had clients go into contract with a house only to find their usual carrier wouldn’t sell them coverage. In such cases, it’s usually possible to find a nonadmitted carrier, but that can cost three to five times more than insurance from an admitted company, according to Branton.

Such problems have also created an added job for advisors—shopping for insurers willing to write a policy. Branton has devoted a considerable amount of time searching for alternative carriers. He finds there’s a patchwork quilt of insurance requirements that requires specific expertise to navigate. One carrier may have stopped coverage in a particular ZIP code completely, while another may say they’re willing to add a few more in that area.

The new normal also has forced advisors to get creative. One solution for clients residing near coastal areas is to build what Sam Brownell, founder of Kensington, Md.–based Stratus Wealth Advisors, calls “a supplemental hurricane fund.” Brownell, who first started paying more attention to such questions after Hurricane Sandy hit in 2012, points to a client who owns a residence in Avalon, N.J., near the beach. That home experienced severe wind damage during a storm several years ago, requiring a hefty outlay for repairs. Despite that expense, however, the client didn’t want to sell the house. So Brownell found ways to create an additional fund devoted exclusively to defraying the costs of home repair caused by storm damage.

While such expenses typically don’t substantially affect the overall financial plans of high-net-worth clients, often they do require making modifications. To enable her clients to buy their home by the Great Lakes, Empedocles directed some of their assets to the down payment, with the assumption that they’d eventually earn revenue from renting out the property.

In some cases, those adjustments are temporary. Take Brownell’s client in Avalon. Brownell ran a variety of scenarios to determine where the money to build the hurricane fund would come from. He ultimately took a portion of RMDs made from several large retirement accounts. Instead of reinvesting it or using it for charitable distributions, as they had been doing, he directed the money to the fund for several years until they’d built it up to an acceptable size. Then he shifted back to the original strategy.

Certain decisions even can result in more money to spend. When Weiss’ St. Petersburg client, for example, changed his plans to buy a home that wasn’t right by the beach, he ended up with a property that was considerably less expensive than the amount they’d allotted. “That freed up money for investments,” Weiss says.

Some advisors, like Empedocles, find their clients are starting to bring up the subject on their own. Many others look for opportunities to broach the subject. The easiest time is after a major weather event, of course. Otherwise, they mention it during annual reviews. For clients whose homes are at risk of experiencing damage from a severe storm, Brownell makes it a habit of discussing the cost of insurance or repair. That’s especially true for clients who have second homes near the beach. During a review, he recently talked about the topic of beachfront property that his clients had inherited from their parents. “I asked them if they would be willing to rebuild the house if it got knocked over,” he says. “How much would they invest in this property knowing it could be the definition of a sunk cost.” They mulled it over and decided to sell, while the home still could fetch top dollar.