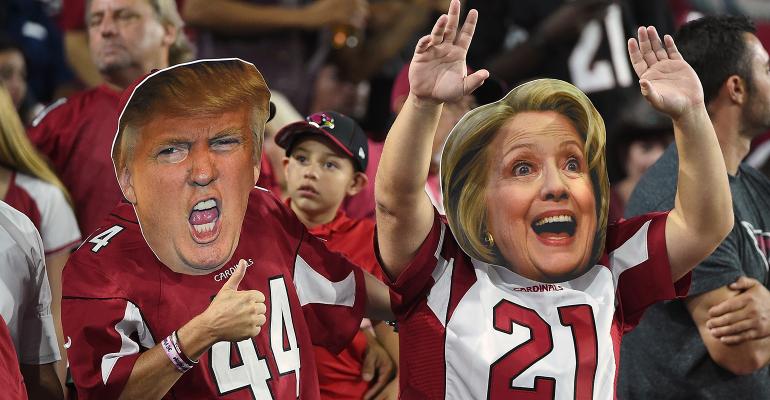 By avoiding the subject altogether, advisors run the risk of having existing tensions redirected onto them.

Married couples tend to have political views that are relatively in sync, but not always. And in those cases, the most recent presidential election and the resultant political environment has inflamed many of those already existing intermarriage political fault lines.

For better or worse, politics shape so much of how we look at the world, from the actors and entertainers we enjoy, to the sports teams and athletes we support, to the attitudes we have about certain cities. And, of course, political views can also weigh heavily on investor behavior.

In our own client discussions, it's become clear that most Donald Trump supporters are generally bullish on the markets and broader economic trends. Meanwhile, ardent Hillary Clinton voters have a more pessimistic view of the markets and our economy.

In fact, in my nearly 20 years working in the industry, no outside event has elicited quite the level of emotionally charged discussion among clients as last November’s election — not Y2K, not 9/11, not even the financial crisis. Indeed, nearly four months after the inauguration, the hyperpartisan political landscape is still one of the first things that many clients want to talk about during financial planning meetings.

Naturally, most advisors are not eager to delve too deeply into politics with their clients. Aside from being a sensitive topic, many (quite rightly) believe it is, at best, loosely connected to long-term financial planning. But by avoiding the subject altogether, with their politically divided married clients, advisors run the risk of having existing tensions getting redirected onto them.

The following are ways in which advisors can have more productive conversations with such clients:

Increasingly, firms have had to expand not just the scope of the services they offer clients, but the quality of them. As part of this trend, advisors will have to take on the role of a financial "life coach" — walking their clients through a host of potentially prickly situations — including the fallout from the most recent election. This approach to client-service may be a big change for many to embrace, but, more and more, this is the type of support that will add value.

Mark Palmerino is a partner at CCR Wealth Management, a Boston-area based firm with approximately $1.2 billion in assets under advisement.