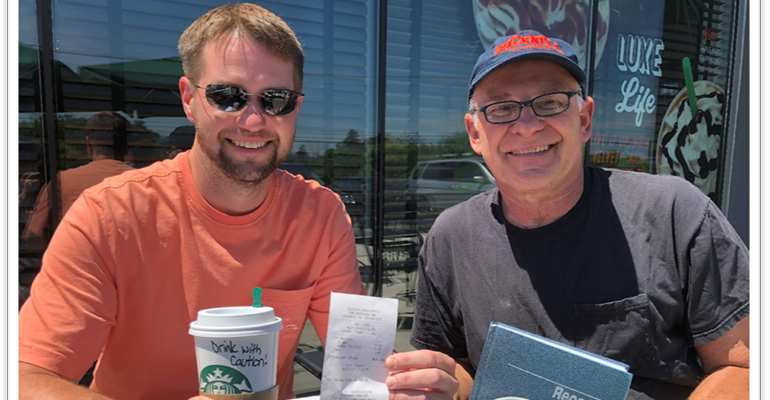 Advisor Rick Wible (left) and friend John Kador at Starbucks. Rick displays the coffee with 25 shots of espresso and the receipt showing the $20 retail value of the order.
Practice Management>Client Relations

A Caffeinated Life Hack Tip from My Financial Advisor

It’s not all about investments and retirement. Here, a client learns a lesson on the everyday meaning of value from his advisor.

A client can learn a lot from their financial advisor just by meeting outside the office.

My friend and financial advisor Rick Wible and I often meet at our local Starbucks coffeeshop to review accounts, sign documents and talk about investment decisions. Rick is president of REW Financial Services in Milton, Penn. We both participate in Starbucks’ rewards program which, after earning enough points, lets the customer order anything for free.

When I earn a Starbucks reward, I never think about ordering anything other than my usual. Maybe I upsized the order, but that’s about it. Not anymore. Not since Rick opened my eyes to extracting value wherever you find it.

I was with Rick at Starbucks recently and he had a reward to redeem. I was surprised by what he ordered: A Venti Americano with 25 shots of espresso and a large cup of ice. A typical Americano has one shot of espresso. Some customers may add an extra shot or two for an additional charge. But Rick asked for a coffee with 25 shots. The order had a value of $20 for anyone paying for it.

When we sat down, Rick added a finger of the elixir to the ice and enjoyed the coffee. He explained that the 24 shots of espresso remaining in the cup would yield at least ten cups of good coffee for the week.

The Starbucks barista was at once impressed and worried by Rick’s order and wrote “Drink with Caution!” on the cup.

I never considered optimizing the value of the Starbucks rewards program until I sat with Rick. It’s a lesson in saving money—extracting the most value from a reward—and a reminder that it’s good to have someone so invested in value on my team.

Want to know what your clients really think of you? Check out more My Life As A Client stories.