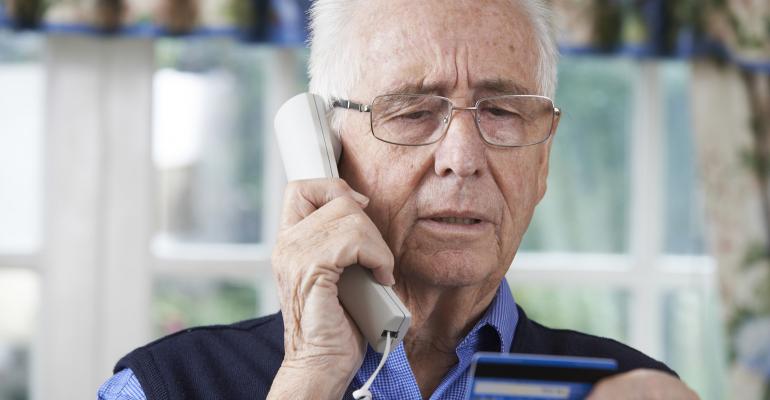 <p>Never, ever give out any personal information, specifically credit card numbers, over the phone. </p>
Practice Management>Client Relations

The holidays are here and with them come a predictable increase in the efforts of scammers, particularly those targeting elderly clients.

Though these sorts of scams happen all the time, the holidays represent a particular season of opportunity for some reason, be it because of a general feeling of generosity and community or because it’s a time when families usually come together. Regardless, a recent blog post by the Consumer Financial Protection Bureau warns against the return of a couple of classic holiday scams and offers some helpful tips to pass on to your older clients to help them avoid becoming victims.

The first trick, known colloquially as the “Grandparent Scam,” consists of someone contacting an older person claiming to be a little-known relative or friend of the family who has encountered some sort of holiday trouble. Perhaps they’ve been in a car accident, are sick or have been thrown in jail. No matter the reason they fabricate, only one thing can help them—your client’s money.

Though you'd think that nobody could ever fall for such a simple trick, you’d be wrong. Clients should be encouraged to verify any stranger’s claims by simply contacting other family members first to see if they’ve ever even heard of this person. Scammers will often anticipate this (sensible) action and insist that the interaction be kept a secret to avoid embarrassment. This should set off major warning bells, and clients should be warned to be particularly suspicious of anyone who would attempt to discourage them from seeking more information or advice before making a financial transaction.

Another common trick that sees a resurgence this time of year is the “Internal Revenue Service Scam.” This one does what it says on the box. An unscrupulous individual contacts your client claiming to be the IRS and threatens them with fines or jail time because of some alleged unpaid taxes or other debts. Often they’ll mention a specific way that the debt will have to be settled (prepaid debit cards are a common example).

This one is both easier to understand why people fall for (fear is a heck of a motivator) and extremely easy to avoid. Clients should be made aware that the IRS will never call demanding immediate payment of a debt and won’t call at all without first sending a bill. The actual IRS also generally does not care how you pay your debts, so will not require that you pay through some specified method. Any potential debts can be verified by calling the IRS directly toll-free at 1-800-829-1040.

The third scam is a twist on the previous one. The “Charity Scam” seeks to prey on those too caught up in the spirit of holiday giving by encouraging them to make donations to fake charitable causes. Often such pitches will appeal not only to a client’s generosity, but also mention the potential tax benefits of year-end charitable donations.

These scams should be easily avoidable, given that there’s no “time sensitive” element. However, they come from such an unexpected source (Who would be so low as to impersonate a charity?) that they’re effective nonetheless. If someone contacts your client seeking money for an established organization, such information is easy to verify. All of these places have departments dedicated to soliciting and collecting donations, so it’s simply a matter of hopping online (or taking a look in the phonebook) and looking up some contact info. If your client can’t find an address, phone number or email, then it’s probably best not to make a donation. If he does find this information, then they should use it and make his donation through the organization’s development staff. There’s really no reason to give the initial caller any information. The charity (if it exists) isn’t going anywhere.