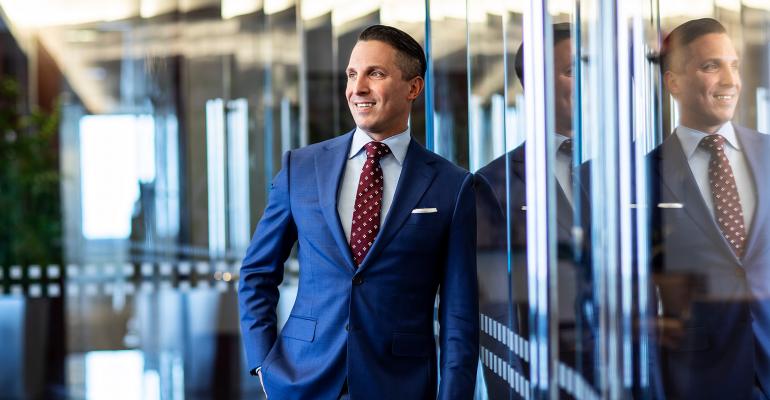 Authenticity Is Key to Connecting with LGBTQ Clients

Understanding the unique needs of clients is key for any advisor, but perhaps even more so when it comes to the growing number of families overlooked by more traditional financial planners.

Franco La Marca says his job is to make money meaningful for his clients.

That’s a goal for any advisor, but even more so for advisors to clients that have been overlooked by traditional financial planning firms, for instance, a same-sex couple in Chicago who had the dream of starting a family. With La Marca’s help, they’re now parents to a set of twins from a single-egg donor to whom each is the father.

Helping couples within the LGBT community navigate the financial complexities of growing their families is La Marca’s specialty, and it’s in growing demand.

La Marca previously worked with 125 families and oversaw an aggregate of $590 million in personal wealth before he joined Bernstein Private Wealth Management in Chicago. His wealthiest family had more than $100 million but his average client had approximately $5 million. Many clients are outside the Chicago area but La Marca is the lone advisor is his group, which includes five associates.

Before the U.S. Supreme Court ruled states could not bar same-sex marriage in 2015, La Marca, who identifies as gay and was an attorney before becoming an advisor, focused on helping same-sex couples achieve the benefits entitled to those who could legally marry, such as shared financial accounts or access to and responsibility for a partner who is hospitalized.

Since same-sex marriage became legal, those needs have largely disappeared, so La Marca finds he’s spending more time helping same-sex couples realize the dream of having their own family.

“My perspective is that gay couples really felt that we’re now finally, in the eyes of the law, the same. Because we’re the same, we’re going to really be able to explore and celebrate what that sameness will allow us to do,” La Marca said. “I think, for many gay couples, this means having a family.”

He’s noticed more same-sex couples pursuing in vitro fertilization, a series of procedures that includes collecting eggs, fertilizing them outside the womb and then implanting them inside the uterus, over adoption.

La Marca’s Chicago clients with twins were fortunate enough that they could pursue and create the family they had in mind through IVF. The cost of locating donor eggs, a surrogate mother to carry the twins and all the ancillary medications and procedures of the process came to roughly $300,000, none of which was covered by insurance.

That is on the high end, La Marca said, but it’s not uncommon for families to spend well over $100,000 attempting IVF, which has, depending on age, an average success rate in the U.S. of only 40 percent, according to the Society for Assisted Reproductive Technology.

No matter a family’s net worth, $300,000 is a significant sum of liquid cash. To make that money available and then have the IVF procedures fail is emotionally and financially devastating. After another client couple spent roughly the same amount without success, La Marca had to confront them with a harsh reality: continuing to attempt the procedures would put their financial future in peril.

The couple ultimately decided to suspend their attempt in starting a family for a few years to recoup their losses and explore adoption, which is substantially less expensive. According to the National Adoption Center, adopting a child in the U.S. can cost anywhere from a few thousand dollars to $30,000 or more, depending on the private agency, attorney fees and any necessary travel.

“Not only are they having to plan for and think about the cost of raising the child or children, there’s also a very significant upfront cost just to have the child that really eats into the bottom line of their savings and their wealth,” La Marca said.

Having been down that path with multiple clients, La Marca said he’s now fluent in the best IVF clinics, adoption counselors and other resources available to them.

About 40 percent of the families La Marca works with are members of the LGTBQ community and he expects his numbers to increase. It’s been his focus at Bernstein Private Wealth Management since February after leaving Charles Schwab, where he was a vice president, led the company’s LGBT practice and helped develop the high-net-worth client practice in the Chicago market.

Most clients are in La Marca’s native Chicago area but increasingly they span the country. New York has become a secondary market for him, where he travels to meet a concentration of clients and visit the headquarters of AllianceBernstein, the asset manager of Bernstein Private Wealth.

“The LGBT community is very tight-knit,” La Marca said. “It’s not only tight-knit in major cities, but it's also tight-knit across the country.”

That means many of his clients have come through word-of-mouth referrals, another lesson for advisors looking to build a business among a “non-traditional” client demographic. He credits at least some of his success in the LGBTQ community to being heavily involved in nonprofit organizations that support it, such as Lambda Legal, a national legal organization whose mission is to achieve full recognition of the civil rights of the LGBTQ community and those living with HIV through impact litigation, education and public policy work.

“People are looking to engage with someone who is authentic, especially when you are advising in communities of diversity, you have to come to the table and be a member,” La Marca said. “I’m not saying that someone who is heterosexual can’t work with LGBTQ couples, but you have to be authentic. You have to understand the community. You have to understand the nuances of the community, the nuances of the needs of your clients.”

Financial firms or advisory membership organizations find it difficult to donate their time among the LGBTQ community, and even harder in landing clients. La Marca said he has seen other financial institutions try and ultimately fail at doing so.

Wealth managers, including Bernstein Private Wealth Management, have set goals to diversify their advisor workforces in an effort to reflect groups they see opportunities in serving, including the LGBTQ community.

As a vice president, La Marca is also helping his firm hire more advisors to focus on serving LGBTQ clients in places like Miami and on the West Coast. There are potential clients out there not just asking whether they’re saving enough for retirement but also what they’re missing, like children and other life goals, he said.

As for himself, La Marca said that he and his partner don’t see a child in their future anytime soon.

But La Marca doesn’t have any doubts. When he visits same-sex couples with children and sees the expected—kids’ toys, laundry, and exhausted parents—it all looks normal to him.