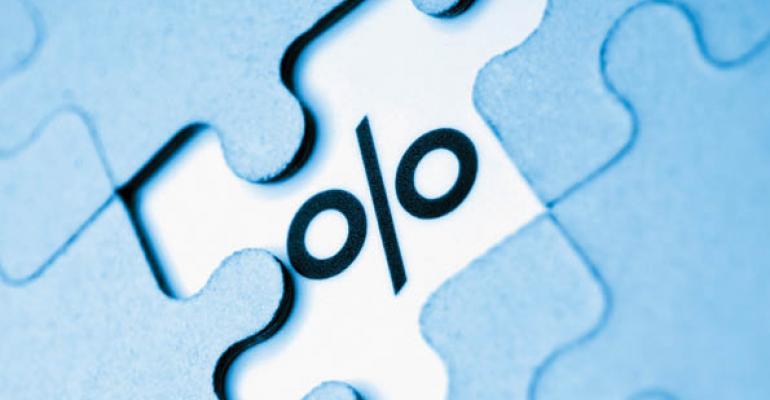 An understanding of basic compound interest theory is needed

On an Excel spreadsheet, we can calculate the $0.93 figure by entering this formula in a spreadsheet cell:

Changing the discount rate. Let’s now assume a discount rate more realistic to the time this article is being written, late summer 2016. Let’s try a discount rate of
1.8 percent. Here’s how the numbers play out for Ben:

Present value of $1 to be received at the end of:

Interest rates and inflation. Interest rates and inflation tend to go hand in hand. In the 1980s, for example, the United States experienced high inflation and high interest rates. During the 1980s, as a consequence, charitable donors established relatively few gift CGAs and CRATs. The annuity-type payments these plans made had too little present value to make them attractive to anyone who wasn’t elderly (that is, who wasn’t an individual with a relatively short future life span). Put another way, the value of annuity-type payments eroded badly in the 1980s over any except a short period of time.

Fast forward to 2016, and the situation is reversed.  As of Summer 2016, the United States has been experiencing low interest rates and low inflation for some years. In this environment, annuity-type payments hold their value well and are attractive to certain charitable donors. For example, donors aged 75 or older tend to be drawn to the CGA. In some cases, very wealthy donors are drawn to the CLAT as a way to transfer wealth downstream at little or no transfer tax cost. It’s worth noting that the typically small dollar gift transaction (CGA) and the typically large dollar gift transaction (CLAT) both tend to work well in a low interest rate environment.

Gift plans that involve annuity-type payments. For the three charitable gift plans that involve annuity-type payments (CRAT, CGA and CLAT), the tax law imposes a two-step calculation. First, the PVA is calculated. Second, the PVA is subtracted from the amount the donor has transferred. The difference is a gift—either to charity or to some other party. In mathematical terms, GIFT = A - PVA, where “A” is the amount transferred by the donor.

A PVA, small or large, cuts two ways. Given that GIFT = A - PVA, the larger the PVA, the smaller the gift. Thus the charitable contribution (gift to charity) for creating a CRAT or a CGA is relatively small in a low interest rate environment. The smallness of the gift can be a problem with these two gift plans, as we’ll see. Yet, although a large PVA means a small charitable contribution with these two plans, a large PVA is good financially for the individual receiving the annuity-type payments. That’s how the PVA cuts two ways.

The problems of low interest rates for a CRAT or a CGA. A low IRS discount rate can pose two potential tax problems for a CRAT and CGA.

Problem 1. The charitable contribution (“GIFT” in our formulation) must be at least 10 percent of the amount transferred by the donor (“A” in our formulation).3 For example, assuming a 1.8 percent discount rate, a 55 year old can’t set up a 5 percent payout CRAT that’s to make payments to the 55 year old for life; the trust flunks the 10 percent test. Fortunately for both charities and donors, the 10 percent test tends not to be a problem, because both CRATs and CGAs are usually created by and for the benefit of much older individuals.

Problem 2. This problem applies only to CRATs for a life or lives. It’s a much more serious problem in a low interest rate environment. It’s the 5 percent probability test, which requires that there not be more than a 0.05 probability on the date the CRAT is created that a CRAT established for one or more lives will be exhausted before it terminates.4 Mathematical probability, by the way, is a number ranging from 0 to 1, not a percentage amount. A full description of how the probability of exhaustion is calculated is beyond the scope of this article. “Probability of Exhaustion,” this page, however, shows the probability of exhaustion for several CRAT scenarios. 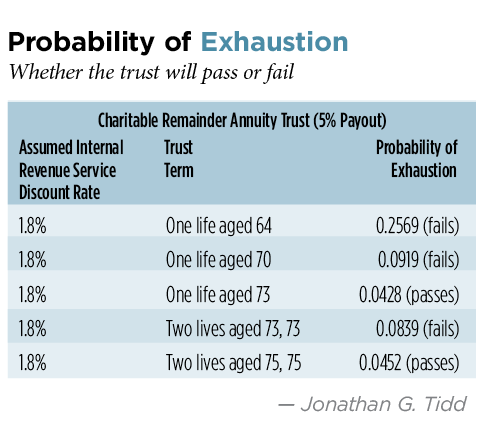 Rev. Proc. 2016-42 contains other valuable information, including sample language for a two-life CRAT. This revenue procedure is required reading for all CRAT drafters. In a low interest rate environment, it allows many CRAT arrangements to pass muster that would otherwise fail up-front, including all the arrangements that fail in “Probability of Exhaustion.”

Example: Jane, age 64, sets up a $100,000, 5 percent CRAT for her life in Year 1, when the applicable IRS discount rate is 1.8 percent. Jane’s up-front charitable contribution is $24,015, which means the CRAT satisfies the 10 percent minimum charitable remainder requirement. Jane’s CRAT, however, would flunk the 5 percent probability test except that Jane’s CRAT instrument contains the new optional provision. Exactly 10 years later, the trustee is getting ready to make a $1,250 annuity distribution to Jane; at this time, the CRAT has assets of $81,250, which means if the distribution is made, the CRAT assets will be reduced to $80,000. The trustee calculates the discount factor under the new optional provision: discount factor = 1/(1 + 0.018)10 = 0.837.  Multiplying $80,000 by 0.837 yields $66,929, which is far more than 10 percent of the initial trust asset value ($10,000), so the trustee can go ahead and make the annuity payment.

That’s a ray of sunshine. There’s a possible rain cloud, however, which appears when the CGA is funded with appreciated stock held long term.9 The donor realizes gain equal to:

where “FMV” is the fair market value of the stock, and “B” is the donor’s basis in the stock.10 The amount of this gain is directly proportional to PVA, meaning that a relatively large PVA causes a relatively large amount of gain to be realized. The donor gets to spread this gain ratably over his L.E. if the donor is the only annuity recipient or is the first of two successive recipients.11 The gain is ratably reported each year and displaces a corresponding amount of tax-free return of investment, so that a large PVA doesn’t help the donor as much when the donor uses appreciated stock as when the donor uses cash to fund the annuity.12

Life estate arrangements. A federal income tax charitable deduction is allowed for giving to charity a remainder interest in a personal residence or farm subject to an intervening estate for life or a term of years.19 The present value of the remainder interest is determined using the IRS discount rate applicable to the gift. In a low interest rate environment, this present value is relatively large, meaning the gift arrangement plays out relatively well from a tax standpoint.

Pooled income funds. Pooled income funds (PIFs), which provide a remainder interest to charity and pay fund net income to life income beneficiaries, were popular in the 1980s, when investment grade bonds were yielding double-digit interest.20 In the current low interest rate environment, PIFs have fallen out of favor.

The problem isn’t low interest rates per se. A low IRS discount rate doesn’t have any effect whatsoever on the federal income tax charitable deduction allowed for giving to a PIF. The deduction is calculated using the fund’s highest rate of return for the past three years as the discount rate.21 A low historic rate of return produces a relatively large remainder value, which is good in terms of the donor’s charitable deduction.

The problem stems from a conservative bond/equity approach to investing that’s standard for PIFs. Given this investment approach, most PIFs pay out too little income (dividends and interest usually) to be attractive to potential donors in today’s low interest rate environment.

2. The calculation of the present value of the annuity (PVA) also takes into account the probability of living from one year to the next when the annuity is to be paid for a life. This probability is determined using the Internal Revenue Service mortality table, Table 2000CM.

6. In this regard, it’s important to grasp that a gift annuity is a contractual arrangement, not a trust arrangement.

7. In theory, a charitable remainder unitrust (CRUT) can’t be exhausted, because the unitrust payout can never exceed the value of CRUT assets on the trust valuation date. That’s mere theory, but the tax law adheres to the theory.

10. The formula here tracks Treas. Regs. Section 1.1011-2(b), Example (8). The logic of the formula is that the donor sells the stock to the charity for a price equal to PVA (which the tax law regards as a bargain sale). The larger the PVA, the more gain realized by the donor, and the smaller the donor’s charitable contribution.

12. When the donor uses cash to fund a CGA, no bargain sale occurs, and therefore no gain is realized.

13. Relatively few charitable lead unitrusts (CLUTs) are established compared to charitable lead annuity trusts (CLATs). CLUTs are typically used to transfer wealth to grandchildren or other generation-skipping transfer (GST) tax skip persons. The reason is that the GST tax applicable fraction can be calculated for a CLUT when it’s created, whereas the applicable fraction for a CLAT can’t be determined until the CLAT terminates. See IRC Section 2642(e).

15. A low IRS discount rate affects only the calculation of a CRUT’s adjusted payout rate. The unitrust payout percentage, as adjusted, is the discount rate used to calculate the present value of the charitable remainder interest. The adjustment based on the IRS discount rate is relatively minor.

16. The right to receive the payout from a charitable remainder trust is a capital asset. Relinquishment of such right is a deductible charitable contribution assuming the creator of the right didn’t contemplate relinquishing it when the trust was created. See, for example, PLR 8805024 (Feb. 5, 1988).