/sites/all/themes/penton_subtheme_wealthmanagement/images/logos/footer.png
Recent
Recent
Thanks to Pandemic Puppies, CRE Investors Are Turning Their Attention to Veterinary Clinics
Aug 08, 2022
Seven Must Reads for the CRE Industry Today (Aug. 9, 2022)
Aug 08, 2022
KKR Sees ‘Golden’ Chance to Snap Up Risky Debt Amid Market Chaos
Aug 08, 2022
IRA Legacy Gifts Are Just Around the Corner
Aug 08, 2022
Featured
The 10 Best and 10 Worst States in Which to Retire in 2021
Jul 15, 2021
Poll: 15 Classic Books on Investing and the Markets
Apr 03, 2020
Fifteen Must-Listen Business Podcasts for Advisors
Aug 14, 2020
Celebrity Estates: Jay Leno and Planning for Classic Car Collections
Feb 22, 2022
Charitable Giving
brought to you by 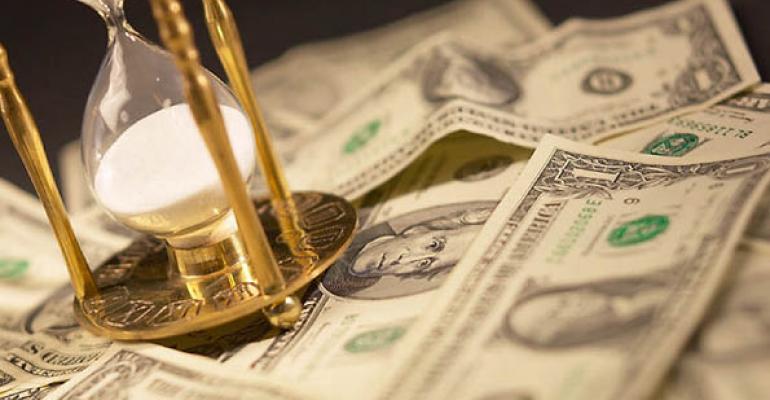 Tax planning professionals need to master the skill of communicating the tax savings from the use of a planning technique in a manner that a potential client can quickly and easily understand. Part of an effective communication process is to give the client specific examples to compare with each other. Another part involves avoiding the use of technical terms with which the client is often unfamiliar. This is particularly true when dealing with charitable giving strategies. Here are some tips on communicating the benefits of a charitable lead annuity trust (CLAT) to a client.

Use of Introductory Statements

When charitable giving is involved, a simple introductory statement to use when you first meet a potential client can be something like this:

With a properly structured charitable giving technique, what you can end up giving to charity need not cost you anything. Instead, what can be given to charity is the money you would have otherwise paid in federal and state income taxes and estate taxes.

Before starting to describe the possible planning technique, you can expand on this introductory statement by mentioning some key benefits:

3. Individuals with short life expectancies can take advantage of the estate-planning compounding over a longer term. For individuals in their late 80s and 90s, using lifetime CLATs for fixed terms can extend the annual compounding for as many years as needed after their deaths so that there are no gift or estate taxes on the transfer of an income-producing asset to the next generation.

A CLAT works the same way as a grantor retained annuity trust (GRAT), except the annual annuity is given to charity instead of retained by the trust creator. Because there’s no retained annuity interest, and if the remainder interest is gifted away at formation, there’s no exposure to estate tax inclusion if the creator of the CLAT dies during the CLAT term, as there is with a GRAT. It’s the use of financial leverage (the assumption that the investment rate of return is greater than the Internal Revenue Code Section 7520 rate) and the compounding of that financial leverage over a long period that produce favorable results. The lifetime CLAT with a fixed term is an ideal vehicle to take advantage of the compounding over a long period of time, as the CLAT term can continue after the individual dies.1

Four Scenarios to Present to Client

Below are four scenarios using a $1 million income-producing asset and the net results under each.

To illustrate the tax savings to a client, start with a situation in which the client hasn’t implemented any tax plan so that she can compare the benefits from the various planning techniques.

The following example uses a lifetime CLAT to illustrate how to accomplish the communication objective in a brief amount of time without the use of technical terms. Remember, it’s always easier to communicate by the use of examples!

Assume that your client, Senior, a resident of California, a state with a top 13.3 percent income tax on individuals,2 with little or no charitable intentions, owns a $1 million portfolio of corporate bonds, paying $38,500 of annual interest (a 3.85 percent return). The current gift tax rate is 40 percent. The September 2016 IRC Section 7520 rate is 1.4 percent.3 You can present Senior with the following four scenarios to help her understand and reach the right conclusion.

Scenario 1: Senior retains the $1 million investment portfolio, earning 3.85 percent annually, pays the federal and state income taxes on the $38,500 of ordinary income each year and allows all earnings, after the payment of the income taxes, to accumulate as part of this investment portfolio. Assume that the accumulated income also earns the same 3.85 percent rate of return.  At the end of 28 years, the investment fund will grow to $1,711,722. Senior gifts the entire $1,711,722 of accumulated funds directly to her children. After the payment of $684,689 in gift taxes, computed at the 40 percent gift tax rate, the children effectively net $1,027,033.4

Scenario 2: Each year, Senior gifts the entire $38,500 of annual investment income to charity, creating a charitable deduction that offsets the interest income. Senior gifts the $1 million investment portfolio to her children at the end of 28 years. The children effectively net $600,000 after the payment of gift taxes at the 40 percent rate, and the charity receives a total of $1,078,000 over the 28-year period.

Scenario: 3: Senior contributes the $1 million investment portfolio to a lifetime CLAT, which in turn is required to distribute a fixed annuity of $38,500 to charity each year over a 28-year period.5 Because the value of the remainder interest to Senior’s children is zero6 (hence, the term a “zeroed-out CLAT”), there’s no taxable gift at the time the trust was created. At the end of 28 years, the CLAT terminates and distributes all $1 million to the children without incurring any gift taxes. Therefore, the children net $1 million, and the charity receives the same $1,078,000 over the 28-year period.

A client who’s already giving substantial amounts to charity each year in her individual capacity can’t avail herself of the estate and gift tax savings from a lifetime CLAT. If this client will be continuing similar annual charitable donations, she should use a lifetime CLAT to also obtain the transfer tax savings.

Scenario 4: Senior contributes the $1 million investment portfolio to a family limited partnership (FLP). After taking a conservative 25 percent valuation discount, Senior contributes the discounted LP interest, valued at $750,000, to a CLAT, which is required to pay $32,563 annually to charity over the 28-year CLAT term.7 Over the 28-year period, the charity receives $911,751. And, on termination of the CLAT, it distributes $1,109,761 to the children, free of all gift taxes.

Comparing Scenario 1 (no giving) with Scenario 3 (CLAT makes contributions), the total of $1.078 million in annual distributions to charity only costs the client $27,033.9 (See “It Pays to Give,” p. 62.) The client is giving to charity the practical equivalent of the gift taxes she would have otherwise paid if the CLAT hadn’t been used. Even though the client’s children would have been slightly better off under Scenario 1, the client may still be interested in the CLAT if you explain that the $27,033 reduction in the amount the children net is the practical equivalent of it only costing the family $27,033 to give $1,078,000 to charity over a 28-year period. 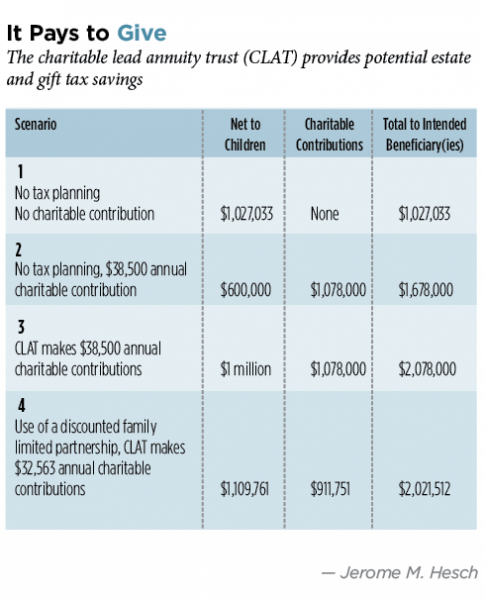 Be aware that the use of the CLAT produces this favorable result only because of the historically low Section 7520 rate. At a higher Section 7520 rate, the same $38,500 annual annuity needed to zero-out the CLAT that wouldn’t deplete principal would require a term longer than 28 years.10 An alternative is not to zero-out the CLAT, so that there’s a value for the remainder interest passing to the children as a taxable gift. Any gift taxes on that taxable gift can be offset by the client’s remaining gift tax exemption, if available.

The client may be reluctant to postpone the distribution to the children by 28 years. If the client wanted to create a 20-year CLAT using the 1.4 percent Section 7520 discount rate, distributing only the $38,500 of annual bond interest to charity, the value of the remainder interest would be $332,445, and the client would have to report that amount as a taxable gift at the time the CLAT was funded.

If the income-producing asset was generating a greater rate of return than the 3.85 percent available from the bond portfolio, then the CLAT term can be shorter than 28 years to zero-out the CLAT. For example, if the investment portfolio was generating a 5.768 percent rate of return ($57,680 annual income), then the CLAT term need only be 20 years for a zero value remainder interest, and the entire $1 million of trust principal would pass to the children at the end of 20 years.

If your client can reduce gross income, it’s possible to reduce, and sometimes eliminate, these phase-outs of deductions. Therefore, assignment of income to another taxpayer can be helpful even if the assignee taxpayer isn’t in a lower marginal income tax bracket.

Clients who make recurring and predictable annual charitable donations, and take their charitable income tax deductions on their individual income tax returns, are missing the opportunity that the CLAT provides by shifting the income used to make their charitable contributions to another taxpayer. With the historically low Section 7520 rate (1.4 percent can be used for September, October and November 201612), a non-grantor CLAT for a fixed term can be designed to structure the annual annuity to charity for a much shorter fixed term than if the Section 7520 rate was higher.

When you’re explaining the estate and gift tax advantages of the CLAT to a potential client, keep in mind you should try to explain how the tax savings are achieved without ever referring to the IRC and without using technical terms. The phrase “zeroed-out CLAT” isn’t something the client will initially understand. The use of simple numerical illustrations that first show what the family would net with no tax planning and then compare the amount received by the next generation with the implementation of the tax plan is the most effective way to communicate. And, examples comparing the scenarios illustrated above can communicate the tax savings within the first 10 to 15 minutes of the client meeting. Remember, what the client really wants to know during the first meeting isn’t how the planning technique works, but how much in taxes she can save!

2. The combined federal income tax on interest income is 43.4 percent when the 3.8 percent net investment income tax (NIIT) is added to the regular
39.6 percent income tax rate. And, in a state like California, where the top state income tax rate is 13.3 percent, the effective rate is then 56.7 percent. In New York, the top state income tax rate is 8.82 percent, and the New York City rate is another 4.3 percent. All or a portion of the itemized deduction for state and local income taxes may be nullified by the Internal Revenue Code Section 68 phase-out for itemized deductions and more likely by the alternative minimum tax (AMT).

4. The children actually receive the entire $1,711,722, but the gift taxes paid by the parent reduce the remaining amount that the parent can give to the children.

5. Each year, the trust reports the $52,240 as taxable income, and each year the trust is permitted to deduct the entire $52,240 as a charitable contribution.

8. This illustration assumes that the client desires to give to charity. If the client has no charitable desires, then she may be able to transfer more to the children using another estate-planning technique, such as a grantor retained annuity trust. But, another objective is to encourage clients who may not otherwise make charitable contributions to give to charity. We call that a “mitzvah!”

9. Had the individual directly given the same $38,500 each year to charity over a 28-year period, it would have cost the client only $17,055 each year (after taking into account the income tax savings for the annual $52,240 charitable deduction, assuming an effective federal and California income tax rate of 56.7 percent (39.6 percent regular tax + 3.8 percent NIIT surcharge + 13.3 percent state)) and assuming that the 3 percent phase-out of itemized deductions and the AMT don’t apply to the charitable itemized deduction.

12. For CLATs, the Section 7520 rate can be the rate for the current month or the rates for the two preceding months.