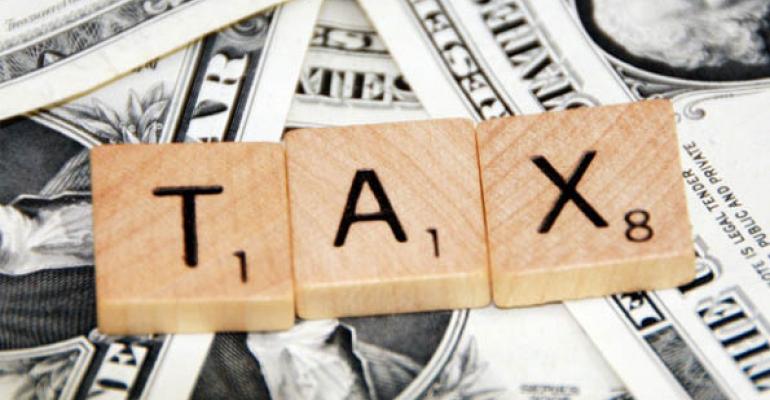 The AMT: Still a Trap for the Unwary

Planning strategies for the charitably inclined

One of the goals of charitable gift planning is minimizing the tax cost by giving when the donor’s marginal tax rate is highest. Many donors reflexively think their tax savings are simply calculated by multiplying their marginal rates on ordinary income (35 percent or 39.6 percent) by the amount of the donation. Yet, these donors will be surprised to learn that their marginal rate might be from the alternative minimum tax (AMT); namely, 26 percent, 32.5 percent, 35 percent or 28 percent. See “Marginal Rates,” p. 50. 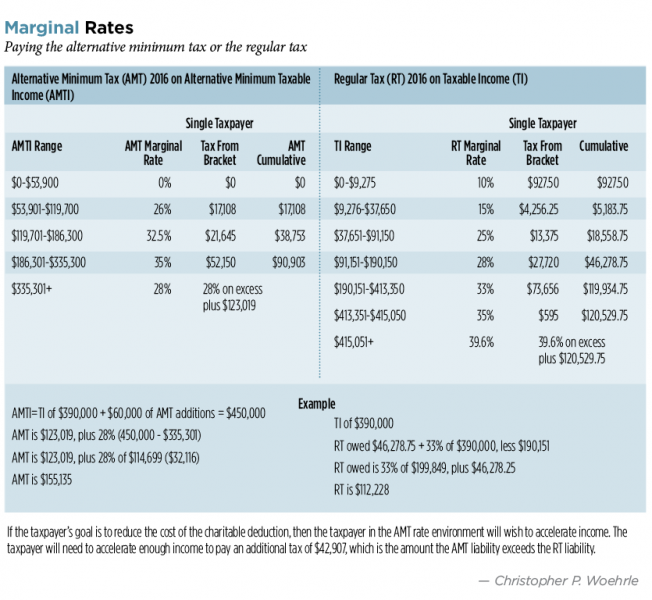 Optimizing the savings from the charitable deduction requires determination of the marginal rate of the AMT for the year of the gift and any future years if a carryover of the charitable contribution is anticipated. For those whose gifts create a contribution carryforward, an accurate projection of income and deductions for the year of the gift and five future tax years is essential. While the American Taxpayer Relief Act of 2012 raised and inflation-adjusted the AMT exemption, keeping millions of taxpayers from joining the rolls of AMT payers, the AMT still can increase the cost of charitable giving for the unwary. The donor’s tax advisor needs to assess whether the AMT position is temporary because of outlier income inclusions or deductions or structurally permanent. Proactive AMT planning can “create” the “correct” marginal rate.

Let’s examine the purpose, computation and planning strategies for, and future of, the AMT.

A continual failure of taxpayers with substantial economic income to pay income taxes quickly undermines confidence in the system. That was in fact the reality when a Treasury department analysis revealed that 150 taxpayers with income of $200,000 (approximately $1.5 million in 2016 dollars) legally paid no income taxes in tax year 1966. Responding to the public outrage, in 1969, President Richard Nixon signed the first AMT as part of the Tax Reform Act of 1969, which was an add-on to the regular tax. Eventually the AMT became a tax system parallel to the regular tax. The taxpayer pays the higher of the two tax liabilities computed under the regular and AMT tax systems.

Theoretically, all taxpayers will pay some income tax. However there are some items acting as escape routes from the AMT. Itemized deductions not subject to the 2 percent of the adjusted gross income (AGI) floor (for example, federal estate tax attributable to income in respect of a decedent items), casualty and theft losses and medical expenses to the extent exceeding 10 percent of AGI don’t enter the calculation of alternative minimum taxable income (AMTI).

Of course, the wealthiest and most tax-averse taxpayers could invest in general purpose municipal bonds to pay zero tax. In fact, the “Internal Revenue Service’s Statistics of Income Bulletin” (Summer 2016) shows 12,794 taxpayer returns paid no U.S. or worldwide income taxes largely because of the exclusion of the interest from general purpose bonds.1 While that would result in no income taxes owed, it may not be the best investment and inflation-management strategy. Bonds have relatively modest potential for appreciation, and the payments aren’t inflation-adjusted.

The starting point is regular taxable income as shown in “AMT Structure,” p. 51. Most of the adjustments are additions to taxable income, thereby increasing AMTI. Some of the more prominent additions include the denial of deductions allowed for the regular tax, such as miscellaneous itemized deductions related to deductible investment expenses subject to the 2 percent of AGI floor, as well as state, local and foreign real property, personal property and income taxes.2 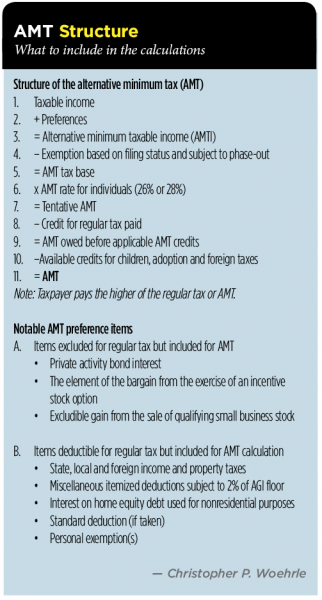 Other adjustments result from the addition of exclusions allowed for computing of gross income, most notably, private activity bond interest and the element of the bargain purchase price from the exercise of an incentive stock option (ISO). After the allowance of an AMT exemption, which is based on filing status and subject to phase-out, the excess of the AMTI over the exemption is subject to tax at nominal rates of 26 percent and 28 percent. However the phase-out of 25 percent of the AMT exemption in effect creates two additional marginal rates of 32.5 percent (1.25 x 26 percent) and 35 percent (1.25 x 28 percent).

Who Pays the AMT?

Residents from high tax locales like California, Connecticut, Illinois, Maryland, New Jersey and New York have among the highest percentage of its filers paying the AMT.3 According to the Treasury department, the disallowance of the state and local tax deduction and personal exemptions respectively account for 62 percent and 21 percent of the share of total positive preference items. Miscellaneous itemized deductions above the 2 percent of AGI floor account for another 10 percent.4  Three deductions for the regular tax account for over 90 percent of the adjustments in computing the AMT.

The revenues from the AMT, while coming from a very small percentage of returns (2.5 percent), are $28 billion.5 To provide perspective on the revenues raised, the AMT raises enough money to match essentially the revenue annually lost from general produce municipal bonds. The Joint Committee on Taxation estimates the exemption for municipal bonds will cost $137.3 billion in lost individual income tax return revenues over five years or an annual average of $27.5 billion.6

Because most itemizing taxpayers will need professionals to assist in the preparation of their return, it follows that they’re unlikely to understand whether their current year is an “AMT year.”

A Roth individual retirement account conversion has the identical effect because there’s an inclusion into gross income.

Coping successfully with the AMT requires consideration of some counterintuitive planning techniques. Specifically, a taxpayer whose AMT is greater than the regular tax may wish to accelerate an inclusion of income because the AMT marginal rate will be lower than the regular tax rate. This AMT rate environment would be attractive for an individual contemplating a Roth IRA conversion or weighing the timing of the exercise of a non-statutory stock option.

However, for the charitably inclined taxpayer, an AMT rate environment suggests not making charitable contributions because the cost of the gift will be higher. The strategy would be to accelerate income to reach a regular tax rate higher than the AMT rate.

If the taxpayer’s goal is to maximize as much of his income at the AMT rate of 28 percent, then he should be accelerating income. Making a charitable gift, of course, becomes more expensive.

If the taxpayer’s goal is to minimize the cost of a charitable gift, it comes at the cost of having income taxed at ordinary income rates higher than the AMT.9

As “AMT Structure” suggests, there’s a range of income taxed at the highest AMT rate of 28 percent, which is less than the highest regular tax rates. The taxpayer’s ability to control the timing of inclusion of AMT income from investments like private activity bonds and ISOs or the taking of a deduction for taxes and mortgage interest expense permits the taxpayer to decide which marginal rate to pay.

Future of the AMT

The existence of any AMT represents a failure of the regular tax system to tax income on as broad a base as possible and at the lowest possible marginal rate. The cost of this compromise approach is complexity in both planning (especially for charitable contributions) and compliance. Requiring a taxpayer to calculate a tax liability twice under two different taxing regimes violates one of the core principles of taxpayer convenience and economic efficiency. The lack of ease in determining one’s marginal tax rate is also a major failing of the AMT.

The nominees of the two major political parties differ in their approach to reforming it. Republican nominee Donald Trump proposes a repeal of the AMT as part of base-broadening and rate simplification.10 Democrat nominee Hillary Clinton pursues rate increases, most notably on capital gains, while modifying the AMT to include the “Buffett Rule,” a 30 percent minimum tax on millionaires.11 Whoever becomes President must deal with the inescapable fiscal constraint that the AMT raises an estimated $372 billion over a 10-year period.12 A repeal of the AMT means that revenue must be replaced to keep tax revenues at current levels, which presently aren’t adequate to keep the budget in balance.

1. “Internal Revenue Service’s Statistics of Income Bulletin” (Summer 2016), at p. 9, notes that for 56 percent of these returns, exclusion of the interest income from state and local government bonds was the most important item for no income tax liability. For another 11 percent of returns, the exclusion was the second most important factor. Interestingly, the charitable contributions deduction was the primary reason for about 10 percent and the secondary reason for about 11 percent of those returns not paying income taxes.

3. See www.taxpolicycenter.org/statistics/amt-state, which shows alternative minimum tax (AMT) by state, tax year 2013; 2.7 percent of all returns show an AMT owed. Tax filers from New Jersey (5.9 percent), Connecticut (5.5 percent) and New York (4.9 percent) are most likely to be paying the AMT.

7. See www.taxpolicycenter.org/briefing-book/should-amt-replace-regular-income-tax at Table 2, showing the income subject to tax as well as the effective marginal rates under the regular income tax and AMT.