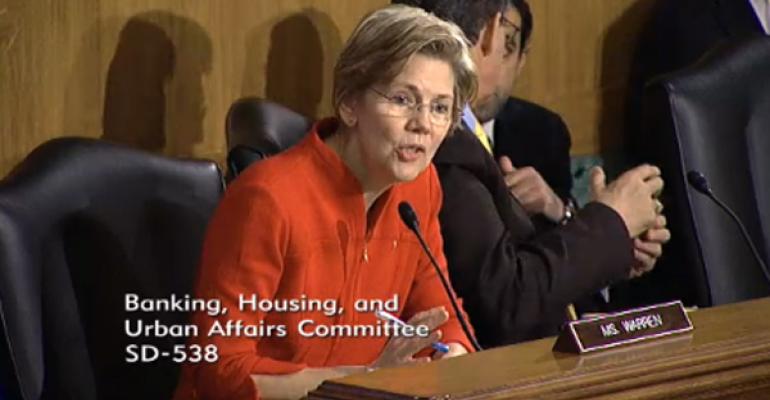 If you bet that newly elected Sen. Elizabeth Warren would sit quietly in the corner for a while, guess again. Despite Warren's quiet approach lately and speculation she might want to fly under the radar for a bit, she came out swinging Thursday. In a Senate Banking hearing focused on the implementation of Dodd-Frank, Warren demanded the financial agencies present answer for their lack of Wall Street prosecutions.

“If [big financial institutions] can break the law and drag in millions in profits and then turn around and settle—paying out of those profits—they don’t have much incentive to follow the law,” she noted.

The Massachusetts senator hammered the heads of Treasury, the Federal Reserve, Consumer Protection Bureau, FDIC, SEC and CFTC on the agencies’ overall failure to bring major Wall Street institutions to trial for their alleged misdeeds.

“We all understand why settlements are important, that trials are expensive and we can’t dedicate huge resources to them, but we also understand that if a party is unwilling to go to trial…the consequence is that they have a lot less leverage in all the settlements that occur,” Warren said.

“Can you identify the last time you took the Wall Street banks to trial?” she asked, questioning how much leverage agencies really had if they continued to settle serious allegations against these companies. “I’m really concerned that too big to fail has become too big for trial,” Warren said to scattered applause throughout the chamber.

U.S. Securities and Exchange Commission chairman Elisse Walter took a stab at defending the agency’s track record, saying that the agency had a “vigorous” enforcement division that litigates cases and rejects insufficient settlements.

But when pressed on the last time the agency actually took a big bank to court, Walter told Warren she’d have to get back to the senator on specifics.

During the hearing, Walter was also called to the carpet on the lack of finalized rules the agency has put forth, specifically on a uniform fiduciary standard and provisions within the JOBS Act. Sen. Jon Tester (D-Mont.) asked Walter to give a timeline when the public can expect some movement on these issues.

While the agency conducted a study in 2011 on investment advisors and broker-dealers and the impact of fiduciary duty, Walters says the SEC determined that further information was needed.

A public request for information on the impacts of adopting a uniform fiduciary standard will “go out in the near future, in the next month or two,” Walter told Sen. Tester.

“Opinions at the commission vary a great deal on the costs that it would impose,” Walter added, saying the agency was taking a very hard look at the current rules that are applicable.

In regards to the general solicitation and crowd sourcing provisions of the JOBS Act, Walter assured the senator that both were “at the top of our plate right now.”