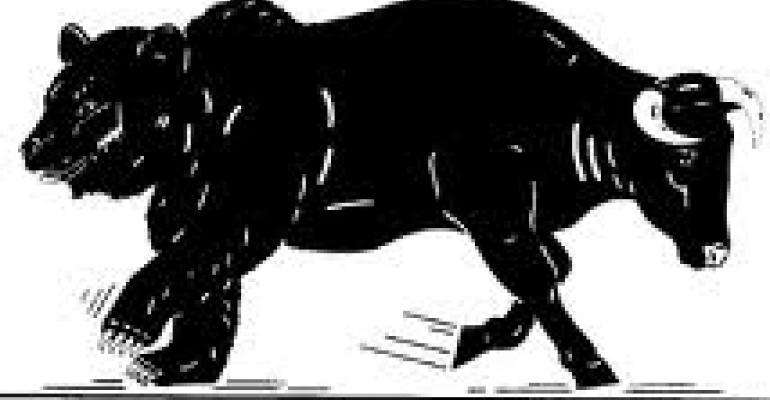 I was reading Michael Santoli's column in Barron's this week. Santoli makes an interesting observation. The American Association of Individual Investors poll --- a gauge of retail investors' market optimism/pessimissm --- crossed into the bullish reading, with a score of 51.6% bullish against 20.2% bearish. Historically, this is bad news.

We all know that the AAII weekly poll is often a negative indicator. As everyone knows "civilian" investors tend to buy high and sell low. I was reading the gallies of a soon-to-be published (McGraw Hill) by Joshua Brown, Fusion of Analytics Investment Partners and an hilarious, insightful blogger, that "the historical averages for this highly regarded poll are roughly 39% bullish and 30% neutral and 30 percent bearish." Take recent history. Brown notes that when the S&P was touching bottoms in late 2002 and 2003, "this survey was repeatedly flashing extreme bearish sentiment readings over 50%."

In March 2009 the S&P was "poleaxed in half," as Brown puts it in Backstage Wall Street, from its 2007 bull market peak. Guess what? The S&P was setting its bottom and the reading: 18% bulls, 70% bears. The S&P 500 "would be up 20% within a matter of months." And, Brown avers, "Within 24 months the market would achieve a double offits March 2009 low, this double happening while a huge swathe of investors watched from the sidelines in disbelieve."

And yet, just the other day, I quoted the Leuthold Group on Friday as being bullish despite a typical slowing of earnings momentum in January.

And at the TD Ameritrade Institutional annual conference a few weeks ago, I reported how dog-nutty bullish Prof. Jeremy Siegel was, uring investors to dump bonds and move into equities, particularly dividend paying equities.

Santoli quotes Leuthold Group analyst Doug Ramsey that this time investors seem to be headed into "safe stocks" and dividends. Perhaps, it means investors are not so risk-seeking these days, just trying to find an alternative to bonds in this zero interest rate environment.

I wonder who is right? AAII poll or the professional bulls?