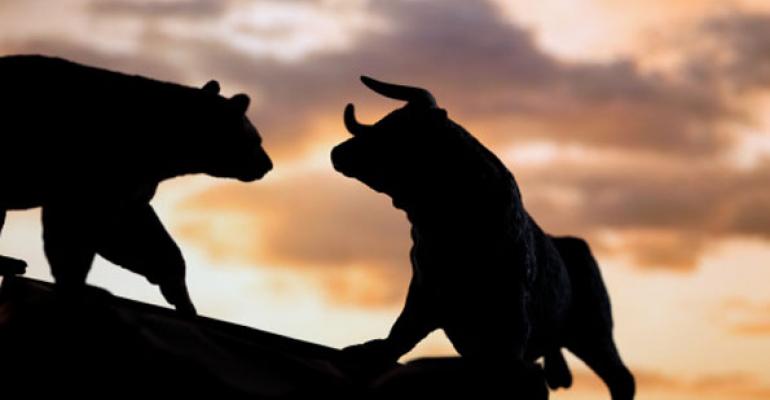 The Trend Is Your Friend—Until It Ends

The trend is your friend, until it ends. As the stock market rallies, S&P Capital IQ Equity Strategist Sam Stovall believes we’re overdue for a correction of 10 to 20 percent. It’s been 32 months without such a decline, while we typically go an average of 18 months. The median is 12 months.

“I am a little bit concerned we have not gone through a digestion of the recent advances in the form of a steep pullback or a normal correction,” Stovall said.

“A lot of people say that what drives the market is fear and greed. I would say no, it’s really just fear—fear of losing money on the way down and then fear of missing out on the way up.”

While a correction may be near, Stovall does not believe we’re headed for a bear market. Here’s why:

Valuations, for one, whether trailing or projected, are smack on long-term averages, not at levels of excess, Stovall said.

“If we were to fall into a bear market, I think it would be from an exogenous event that is not driven from the market as a whole.”

“At the beginning of June, if you looked at the traditional relative strength between growth and value or between consumer discretionary and consumer staples, the answer would’ve been yes, it’s time to bail out. Yet what I have found is by looking at the relative strength between the S&P 500 high beta and the S&P 500 low volatility indicies, that we bounced, rather than broke below the moving 200-day average.”

Consider this scenario: You invested $1,000 into the S&P 500 in 1999 and were long the S&P when cyclical components were outperforming the defensive components (growth beating value, discretionary beating staples, or high beta beating low volatility), and went to cash when the inverse was true.

“What I found was that you actually lost opportunity by monitoring the pure growth and pure value because $1,000 became $1,154 versus $1,309 for the market as a whole,” Stovall said.

In instances where consumer discretionary beats staples, the portfolio grew to $8,800. High beta was an even better indicator, with the portfolio growing to more than $12,000.

The yield curve is another reliable indicator. Historically, seven of the eight bear markets since 1963 were preceded by a flat to inverted yield curve. And it’s still rising.