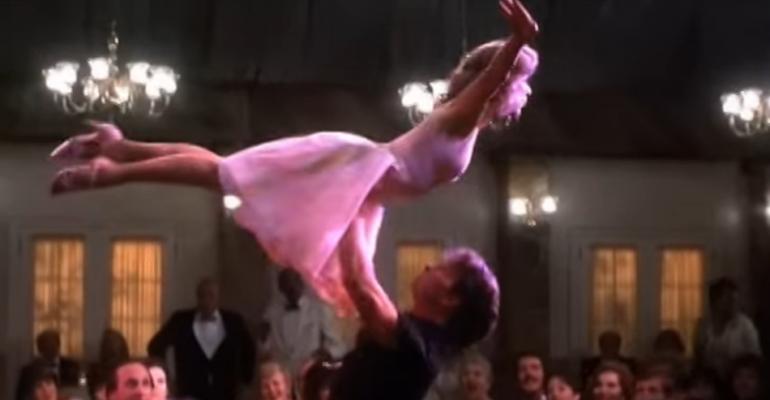 A California federal judge threw out Lionsgate Films’ lawsuit against TD Ameritrade, which claimed the brokerage firm infringed on its trademark in a recent ad referring to the studio’s 1987 movie Dirty Dancing, according to The Hollywood Reporter. The ad depicts a man holding a piggy bank above his head similar to the movie’s famous dance move, and a narrator says, “Nobody puts your old 401(k) in a corner,” referring to the movie’s line, “Nobody puts Baby in a corner.” The studio claimed it had trademark rights to the movie line, and that TD Ameritrade was trying to "deceive customers into believing that the Advertising Campaign was a Lionsgate-licensed, authorized or sponsored work, when, in fact, it was not." California federal judge Dean Pregerson threw out the suit, saying he doesn’t see how this is different from a copyright infringement claim. The precedent for the case came out of a previous decision by Supreme Court Justice Antonin Scalia, who found that trademark origin claims could be applied to “tangible goods that are offered for sale,” not an “idea, concept or communication embodied in those goods.”

The Securities Commission of Malaysia plans to release details of a program to strengthen its position in the global Islamic finance sector. “We have identified Islamic wealth management as a new growth area which, apart from leveraging on Malaysia’s existing infrastructure and capabilities in Islamic finance, is also a logical expansion for our well-developed Islamic fund management industry,” commission chairman Datuk Seri Ranjit Ajit Singh told the New Straits Times Press. Malaysia’s Islamic capital market is estimated to be close to $500 billion, or 60 percent of the country’s total capital market. It is also home to the largest number of Islamic funds by domicile. American Muslims alone present a $50 billion market for advisors willing to learn the ethical nuances of Islamic investing, according to Monem Salam of Saturna Capital Corporation in Kuala Lumpur. Sharia-compliant investing eschews the charging of interest on loans as well as firms involved in tobacco, alcohol, gambling or pork production.

Overwhelmingly, it's millennials who use "alternative financial" services like payday loans, pawn shops and rent-to-own services. Among those who did was Jerry Mitchell, now CEO of Orlando, Fla.-based Incite Wealth. He tells Nancy Mann Jackson on the Acorns.com blog Grow that he paid his way through college by working fulltime and saving his money. Still, he relied on payday loans and rent-to-own services to make ends meet. He got himself into trouble buying car rims on a rent-to-own plan, followed by taking out a payday loan to pay for car repairs. Mitchell details the debt he went into using those services, and the sacrifices he had to make to climb out (cancelling cable, trading in his cell phone for a prepaid plan, working a temporary night job, eating $1 frozen meals for lunch and dinner, etc...). Lesson to be learned: "Being financially responsible is a lifestyle, not a fad—and there isn’t a finish line."

Blooom, the robo-advisor that takes over and manages employee 401(k)s, is giving out up to 5,000 burritos for those willing to register and spend 5 minutes on their site. The promotions is open to anyone who has a 401(k) or 403(b) account, according to a promotional email. The fintech firm is teaming up with Chipotle on the promotion, which is doing whatever it takes, including giving its food away, to rebuild its reputation with consumers following a series of E. coli food outbreaks late last year.