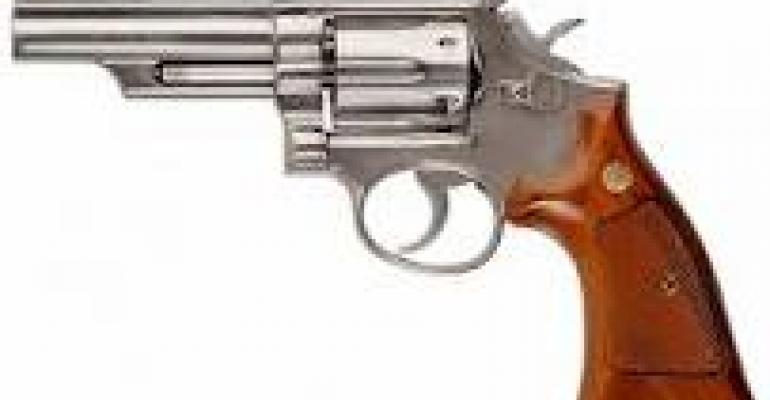 I have no idea who Bret Jordan is ---- he is an analyst at Avondal Partners, an independent investment bank and wealth management boutique in Nashville. Or Jordan's record. This was brought to my attention by a relation who lives in Nashville and it is a good read, his research report. The opinion is this: Jordan says the Smith & Wesson's (Nasdaq: SWHC), the legendary gun manufactuer, earnings could double because of operating efficiency improvements and increased demand. (Oh, the firm says Jordan was ranked among the best specialty retail analysts by the FT/StarMine.)

Bret covers the specialty retail and consumer products sectors for Avondale. His expertise on buying trends is often sought by the national media, including CNBC and Bloomberg TV. Zacks Investment Research gave him an "All Star" rating in the consumer discretionary sector, and Wall Street Journal named him "Best on the Street" for specialty retail coverage in 2004 and Top Consumer Products Analyst in 2010.

After several years of poor execution and a value-destroying acquisition, Smith & Wesson has gone back to its roots as a core firearms manufacturer. In October, they shed an underperforming management team and appointed the head of the firearms division as CEO. Quarterly earnings reports in December showed the first glimpse of improvement in SWHC’s core business – in fact, some segments were up more than 50 percent year-over-year.

The company has consolidated manufacturing to its Springfield, Mass. site, and a rapid acceleration in the NICS federal background checks data is indicating strong demand and sales. Anecdotal reports from the industry’s largest trade show this month are revealing that social acceptance of firearms is at an all-time high and election years tend to be boom years for gun manufacturers.

With surging customer demand, right-sized operations, and meaningful earnings growth and margin expansion projected, now could be the time to buy SWHC.

For updates on Bret's work on Smith & Wesson and questions about Inside Avondale, reply to this email or call David Morris in Avondale's Private Client Group at 615.312.7133.