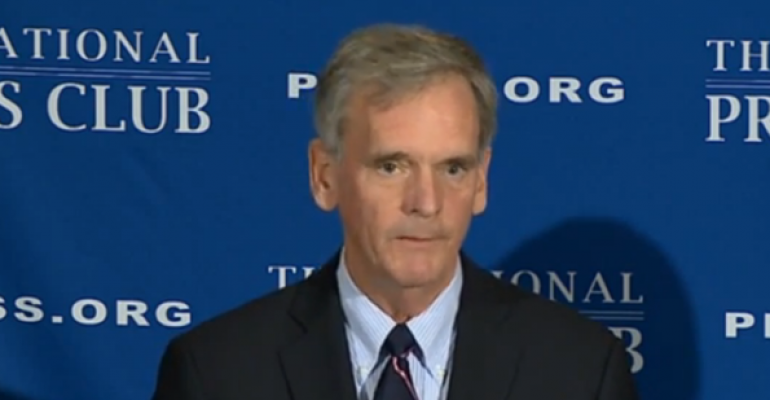 In comments before the National Press Club on Thursday, Gregg said he supported recent proposed legislation by House Republicans that aim to bar the DOL from releasing a fiduciary standard before the SEC.

“Basically Dodd-Frank made it clear that the SEC should take primary responsibility in this area of establishing a fiduciary rule,” Gregg says. “Clearly, the DOL role here should be secondary to the SEC moving forward and certainly should not move forward before the SEC.”

Last week, the U.S. House of Representatives passed a bill sponsored by freshman congresswoman Ann Wagner (R-Mo.) that would force the DOL to delay adopting any fiduciary standard before the SEC has acted. But the vote lacked bipartisan support and it has little chance of becoming a law.

Opponents of the DOL’s original initiative, Gregg included, point out that it could limit the public’s access to quality financial advice.  “The original proposals of the DOL on the issue of fiduciary would have basically forced out of the business of giving advice a lot of the industry and the loser in that would have been the consumer,” he said Thursday.

At risk are consumers who do not have a huge 401(k)s or IRAs, those under the $100,000 level, Gregg says. These mass affluent investors would have found themselves unable to use advisors to determine how they wanted to invest their retirement dollars

During his remarks to the National Press Club, Gregg unveiled a new SIFMA initiative called “Our Partnership With You.” The group designed the brochure to help educate investors on their rights and walks through ways to attain a successful relationship with a financial advisor.

The new educational material is the first stage of SIFMA's new broader investor-first initiative in an effort to help rebuild investors’ trust in financial services industry. Earlier this year, the industry group rolled out a grassroots campaign aimed at showing the public how essential the capital market system is in the U.S., with plans to introduce a number of strategies focused on community involvement and investor education.

While the new document highlights investors’ right to be informed about potential conflicts-of-interest, have clear fee disclosures and access to responsible advice, the document does not advocate all brokers act as fiduciaries.

“Fiduciary relationships have all sorts of legal implications that would limit in many ways the ability of people to give advice in a constructive way or maybe not at all,” Gregg says.