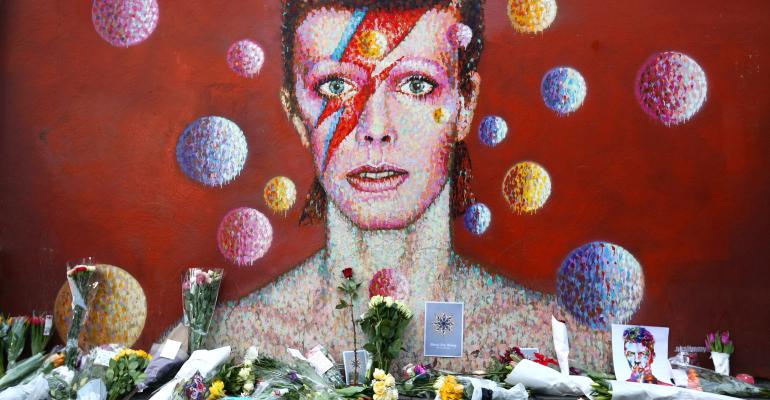 David Bowie, the British rock legend who died Monday at 69, will mostly be remembered for his influential contributions to music, fashion and film. But Bowie was also financial innovator. In 1997, Bowie issued bonds backed by future revenue of the 25 albums he had recorded before 1990. The so-called Bowie Bonds earned him $55 million, which he used to buy back songs owned by his former manager, according to MarketWatch. Bowie Bonds were in hot demand before digital music services wreaked havoc on the record industry (by 2004, Moody’s downgraded them to just above junk), and inspired similar bonds from artists like James Brown and Marvin Gaye.

The new Showtime series “Billions,” which airs Jan. 17, follows the life of a hedge fund titan and his battle with regulators. And while Malin Akerman, the actress who plays the hedge fund manager’s wife, portrays a tough, punishing character, her best financial advice is more zen, according to an interview with Aol.com. “Empty your pockets in order to fill them again,” she said. In other words, Akerman explains, don’t hold onto your money. Enjoy life, and spend your money wisely. “But you have to give to get back,” she adds. We’ll have to wait and see whether her character spends it wisely…

Bringing Alts to the Masses

Dynasty Financial Partners is partnering with iCapital Network to bring its advisors improved access to alternative asset managers. The new Dynasty Select platform will offer member firms access to private equity funds, hedge funds and direct investments. Institutional-grade research and due diligence services will also be available through iCapital, which is a financial technology provider that bridges high-net-worth investment capital with private placement opportunities. “We can now provide advisors with a deep level of analysis and diligence and unparalleled technology to create a vastly improved client experience,” says Todd Thomson, Dynasty’s chairman and investment committee chair.

What makes someone a top-performing CEO? You could recite some platitudes from self-help books, but new research papers look to quantify how much ability plays a role in becoming a CEO. They found that CEOs are smarter, on average, than most people, but not much smarter than doctors, lawyers or engineers. What they did demonstrate was a willingness to assume responsibility, independence, outgoing personality, persistence and emotional stability, but the single biggest factor was luck. Industry and macroeconomic factors matter much more for financial success than the person in charge, and CEOs were frequently fired for factors outside of their control. They also found that taller men were more likely to become CEO, and that when researchers combined cognitive ability, interview results, and height into a single score, the CEOs of large Swedish firms were in the top 5 percent. “Put another way, CEOs matter less than many people think,” the Harvard Business Review concluded. “Instead, luck, and yes, bias, play a far larger role in determining who ends up leading companies, and whether they are fired or end up industry leaders.”