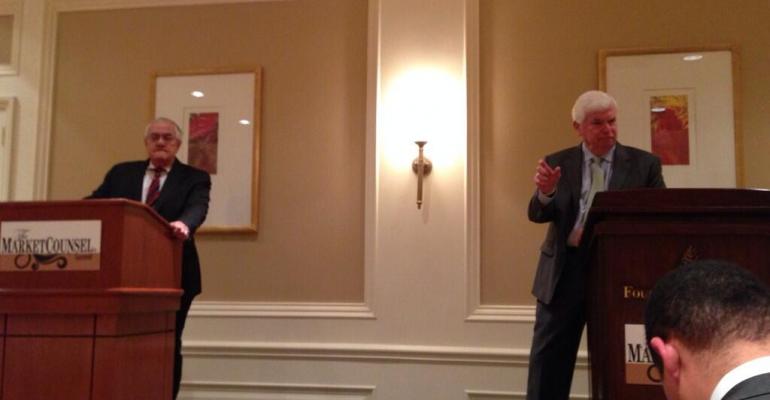 The revolving door between Wall Street executives and Washington regulators should not be decried, but perhaps celebrated. Former Senators Barney Frank and Chris Dodd told reporters Wednesday that the investing public actually benefits from those on Wall Street spending time leading regulatory agencies.

“One of the best regulators right now is the CFTC chairman, was a partner at Goldman Sachs, Gary Gensler,” Frank says. He called the current conditions “complicated stuff,” saying it’s helpful to have regulators who understand it.

“There will always be cases of people who try to abuse the privilege of having been in a public position and cashing in on it—you can’t stop that,” Dodd says. “I do think we lose a lot when we exclude anybody coming back into government service that bring a wonderful knowledge, experience.”

Dodd pointed to Joseph Kennedy Sr.—the inaugural chairman of the SEC in 1932—saying that while he would have had a very difficult time being confirmed today, “who better to take over, because he knew every game, every trick?”

Frank pointed to Jack Lew, the current Treasury secretary and former COO of Citigroup. “Everything I read says he’s responsible for the much tougher Volker rule than people expected,” Frank says.

And both gave a ringing endorsement to current SEC chair Mary Jo White, saying the former prosecutor is proving to be a tough regulator on the Wall St. firms.

Of course, these opinions come from two Congressmen who have since moved into lobbying and consulting positions since retiring from public service, so perhaps they do not provide not a completely unbiased view.  Yet both make good points that there have been very successful regulators who have started on Wall Street and become great promoters of investor protection. Only time will tell if White and others will follow the same path.