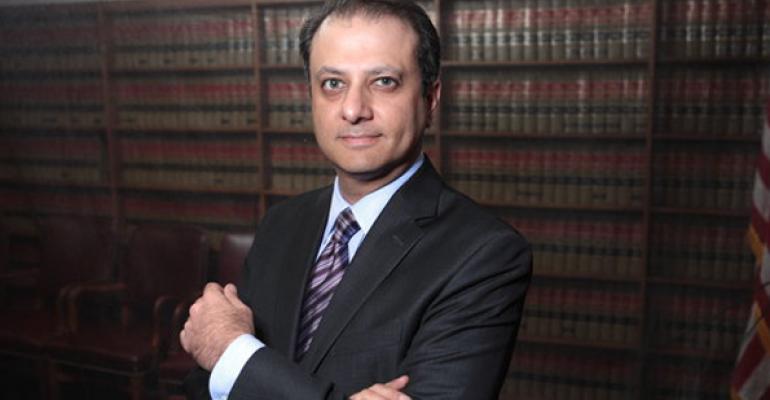 No ‘Get-Out-of-Jail-Free’ Card for Financial Firms

Institutions—no matter how large—should be held accountable for crimes. And it’s only a matter of time before a significant financial company is charged with a felony because prosecutors aren't buying the 'sky will fall' argument anymore.

In a speech at SIFMA’s Compliance And Legal Society Annual Seminar Monday, U.S. Attorney for the Southern District of New York Preet Bharara told attendees that companies, not just individuals, should be held accountable for crimes. And size will not help companies escape prosecution, Bharara says, noting that he's found the sky will not fall if they are charged.

“You can expect that before too long a significant financial institution will be charged with a felony or be made to plead guilty to a felony, where the conduct warrants it,” he said in a speech to attendees.

Bharara dismissed the notion that some corporations are “too big to jail,” saying that no one should receive a "get-out-of-jail-free card based on size." Financial institutions will do almost anything to avoid a tough enforcement action—including making dire predictions about the impact of criminal charges. There’s a “powerful incentive to exaggerate” the consequences Bharara says.

Companies regularly site the reputational damage a criminal action will bring—stock will plummet, clients will abandon ship and employees will quit en masse. “I have heard assertions made with great force and passion that if we take any criminal action, the skies will darken; the oceans will rise; nuclear winter will be upon us; and the world as we know it will end,” he said.

While his office considers these arguments, Bharara says they’re increasingly taking them “with grains of salt.” “What I have found typically is that, in reality, as we had suspected, the sky does not fall.” The “Chicken Little routine,” as Bharara calls in, is beginning to wear thin.

“And so, when you make a pitch, please make it count and always throw straight,” Bharara says. But don’t expect the company’s size or threats of corporate demise to save companies from prosecution.