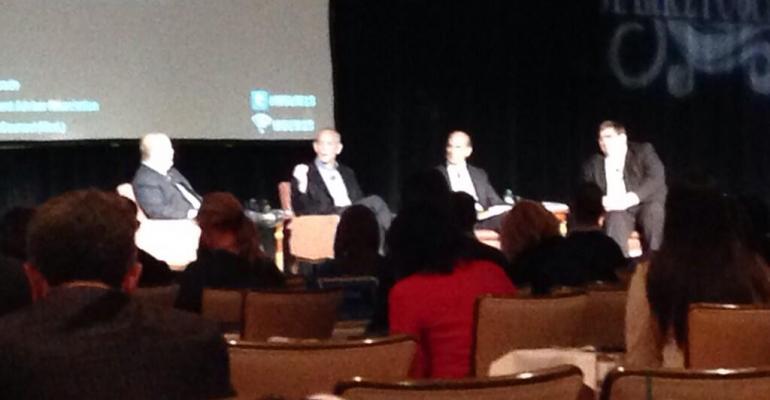 Investment Advisors up Against Odds with Future Rules

Investment advisors could be looking at a future filled with broker-type rules and FINRA oversight if they don't fight back, according to a panel filled with gloom and doom predictions at the 2013 MarketCounsel Summit in Las Vegas.

Going hand-in-hand with the harmonization discussion, the panel also weighed in on the expected uniform fiduciary standard. “Even if we do get a fiduciary standard, it’s not going to be 40 Act,” said Skip Schweiss, head of TD Ameritrade Institutional's Retirement Plan Services platform and managing director of advisor advocacy and industry affairs. “We’ve lost that battle."

But he, Tittsworth and Ron Rhoades, president of ScholarFi, were skeptical that will come to pass anytime soon. The SEC has slated a uniform fiduciary standard as a long-term agenda item, without a specific timeline in place for 2014. The Department of Labor, however, may put forth a new proposed rule on the definition of a fiduciary under ERISA, according to the panel, citing the regulator's recent agenda that set August 2014 as the target date.

Schweiss also noted in a recent meeting at the Institute for the Fiduciary Standard earlier this week discussed the very real possibility that the SEC will not cross the brokerage industry. “Even if we win a fight on the rules, they are not going to be enforced,” said Rhoades.

But on a more positive note, Schweiss and Tittsworth noted the investment advisor community’s success in fighting off FINRA as the industry’s SRO. “We fought this thing," Tittsworth said.

In fact, Tittsworth supports a user fee bill allowing the SEC to charge advisors to administer audits rather than having FINRA take over as the regulatory and enforcement body. Although Tittsworth says his first choice would be for the SEC to more effectively utilize its current resources—get SEC examiners to perform four exams a year, instead of the two what they’re currently undertaking on average.