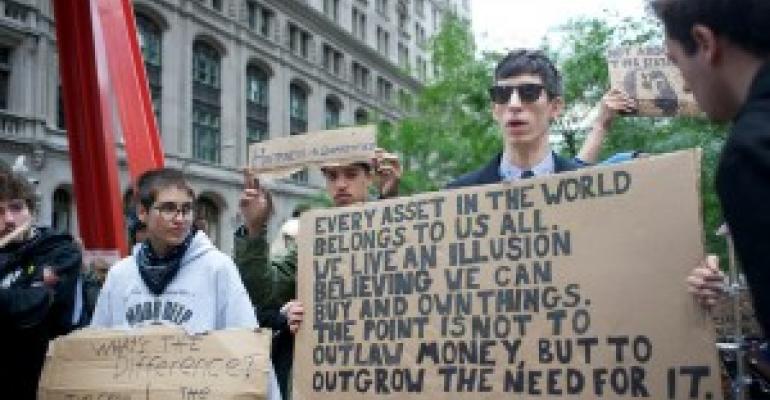 Inside Occupy Wall Street: Financial Advisors’ View from the Inside

Last month, I wrote (and posted online)an opinion piece entitled, "Occupy Wall Street Protesters: Do They Mean Occupy Our Wallets." Not surprisingly, being a libertarian, I found the OWS movement to be nothing more than silly claptrap. Actually, not silly at all, but rather scary since the general message was bring back the communists! To be fair, I sent two financial advisors who work on Wall Street to go up the block to check out the scene for themselves. I got a rather surprising note back.

The following was written by Eric Zoldan, an advisor with JHS Capital Advisors, and Thomas Dowling, of Aegis Capital

We as human beings tend to search out that which will corroborate our views and beliefs. But someone once said: “Find someone you disagree with and listen to or read them every day.” As investment advisors we believe it is important to try and keep an open mind and be objective. There have been so many unanswered questions about Occupy Wall Street in the last two months from our clients, families, and friends, that we felt an obligation as investment managers to look for some of these answers, first-hand. What is the real message of the group? Are they in-fact a fragmented bunch without any real leadership? How sustainable is the protest, and how long did we think it would last? So at 5:50 a.m. on Nov. 17, instead of walking down Wall Street to our offices as usual, we walked north to Zuccotti Park.

By 4 p.m. that afternoon, we were certain that what had been going on for the last two months was hardly over and that this group was not what many have portrayed them to be.

Over the next several hours, the two of us spent our time speaking with protesters as they emerged from a nearby bank lobby and restaurant where they had been sleeping since Nov. 15, when tents were disallowed from Zuccotti Park. As we entered the park we thought, “Surely these vagrants—as the media had portrayed them—would not accept us.” We walked around, aimlessly at first, then noticed a small group of people congregated in the corner so we strolled over and tried to inconspicuously fit in.

It was much easier than we thought to “fit in,” as we were immediately greeted and quickly involved in a conversation with Lathan, an Ivy League environmental science student who immediately identified himself as part of the so-called 1 percent. He claimed without hesitation that he comes from a privileged home and has had all the opportunities in life, but has been sleeping outside for almost two months in order to make his difference. In his words, “It is not Wall Street that I'm upset with. It's the money being wasted by policy makers in Washington, and that much of the funds that line our politicians pockets come from these guys," as he pointed up to the high rise offices on Broadway just east of Zuccotti. That message was echoed by Shanna from Greensboro, N.C., and Michael from Jacksonville, Fla., both employed people who had arrived the evening prior after watching the protests play out on television.

We spent hours talking and getting to know the small bunch of people who were protesting at the park. Yes, the protesters were unkempt and disheveled, but that did not make them hooligans or uneducated. Actually we noticed the opposite; the protesters came from very different backgrounds: some very educated, some less so, some from the tri-state area and others outside. One protester had his sign written in Latin as he said to us, “I don’t know many people on Wall Street that know Latin.”

Dashawn, another occupier, wasn't holding up a sign, or protesting in any fashion. He was there passing out hand warmers, snacks, and foil cover-ups to those who were cold and hungry. The funds for supplies have come from donations. As we spoke with him, an attorney from Connecticut handed him a check for $1,000 and said that he would be back next week with another one. Dashawn invited us to a private "Direct Action Leadership Committee" meeting at 61 Broadway, 16th floor, at 2 p.m. This was our chance to really get behind the scenes of OWS.

As we walked into the conference room on the 16th floor, it became immediately apparent that there was, in fact, real leadership of OWS, despite what we have read about in the papers and see on TV. The two-hour meeting had the structure of a business conference. There were breakout sessions, recording secretaries in each group, and an outlined itinerary with one common goal: How do we ensure the longevity and sustainability of growth to what we have built in the last 60 days.

It was time to regroup after quite an uncertain few days since the disbursement from Zuccotti. A good portion of the discussions involved the need to keep everyone healthy through the winter months and beyond. Plans with lists of restaurants, housing, and washing facilities were put on a white board as a vital immediate plan of action that needed to be communicated in order to maintain total group continuity. Lauren, an intelligent college graduate, had made arrangements with a local church to offer daily relaxation, yoga, and exercise classes in order to help maintain physical and mental sanity for protesters. At one point, Matson, a participant, offered a proposal to occupy a vacant building two blocks from the park, but the group was reluctant to even listen to the idea. Leaders said that the movement could no longer be about a 24-hour, seven-day-per-week lawbreaking mission, but rather a series of well thought out planned marches and protests. The efforts were starting to wear on those who had been there for the last couple months, and the group’s main focus now needed to shift to longevity.

We will not say as a whole whether we agree with the protesters, but you cannot deny some of their points or gripes are legitimate. After spending some time with them, we can say we believe that they are not protesting us or you as a “Wall Street worker.” They are protesting because they are frustrated and do not know any other way of expressing themselves. They are frustrated with the politicians who don’t seem to have our interests in mind—the politicians who live under different rules than ours. They are frustrated with the lobbyists that change the landscape of this country to benefit the few. They are frustrated that they have tens of thousands of dollars in school debt and cannot find a job. Where is the American Dream in that? Will they ever be able to pay it back? Did they make a mistake by following the dream that has been preached to them ever since they were young: Go to school and get an education and you will find a good job and advance up the corporate ladder?

In our humble opinion these protesters are not trying to make Wall Street workers’ lives difficult. Why take over Wall Street then? What do most of the 1 percent—bankers, CEOs, the heads of Fortune 500 companies—have in common? Most of their wealth was created because of the stock market, i.e. “Wall Street.” Because their primary gripe is with Washington policymakers, not Wall Street, it became quite clear to us that the displeasure of the movement will only become much greater and profound, but very well may be moving to Washington, D.C.