https://www.wealthmanagement.com/sites/wealthmanagement.com/files/logos/Wealth-Management-Logo-white.png
Recent
Recent
Investing in Private Real Estate
Jan 27, 2023
Broker/Dealers Must Optimize for Service to Move Past Stagnation
Jan 27, 2023
Nine Must Reads for CRE Investors Today (Jan. 27, 2022)
Jan 26, 2023
Lacking Property Sales Data, Appraisers Look to Other Marketplace Drivers to Value Assets
Jan 26, 2023
The Healthy Advisor: Beating the Odds and a Fresh Perspective on Life With Robert Steinberg
Jan 26, 2023
Featured
The 10 Biggest Tax Crooks of 2022
Jan 23, 2023
The 12 Best Business Books of 2022 for Advisors
Nov 23, 2022
The Most-Revealing Onboarding Questions Advisors Ask
Jan 09, 2023
How Well Do You Remember 2019?
Jan 03, 2023
Von Aldo
brought to you by 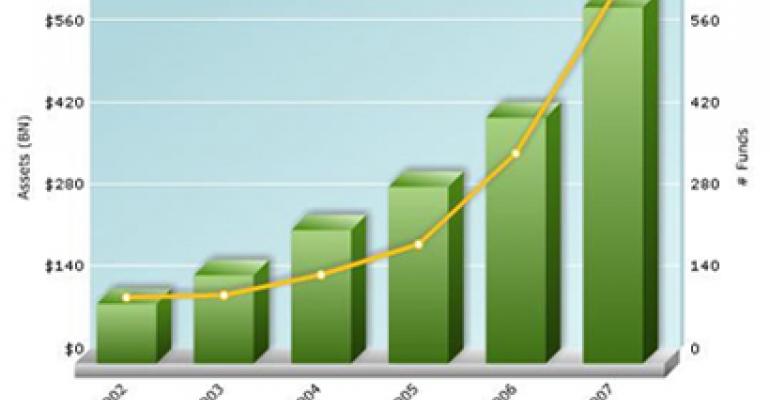 ETFs Will Dampen B/D Profits. How Will That Affect You?

In January we wrote a story about the affect ETFs are having on the brokerage business --- to wit, it may dampen profitability. In our story from January, we wrote:

"iShares, which was purchased by BlackRock in June 2009 as part of its acquisition of Barclays Global Investors, has been the market leader in the exchanged-traded funds space for much of the past decade, and it still holds first place. (See table, page 44.) But in November 2009, Charles Schwab burst onto the ETF scene, a move that shook up the prevailing order and altered the asset management industry at large. Lots of investors wanted to talk to Chuck. Why? Lower fees. That fall, Schwab launched four funds with fees well below market rates, undercutting some of the biggest players in the space, including iShares, Vanguard and State Street Global Advisors. The price war was in full swing."

Brad Hintz, a senior analyst at Bernstein and a former CFO of Lehman (way back in the day), doesn't necessarily agree that a price war has begun, but he did say in a 16 Dec. research report, "Down with ETF free riding! Over the long-term the growth in ETFs will impair profitability of retail distribution channels. ETFs remain only a fraction of the $23 trillion global funds market, but they have grown rapidly to $1 trillion in global AUM and boast 54% CAGR since 1993 versus 11% for mutual funds. ETFs are chipping away at the market share of mutual funds and no longer can be ignored by the brokers."

My question to the forum: How have ETFs/ETNs affected your business? I know many FAs use ETFs (indexes and "fundamental" indexes) to capture beta and use other active managers to capture alpha. One FA told us that ETFs have actually helped him gain assets --- investors like their low costs, obviously. How are you using them? Will a "price way" break out? Hintz says "If there is to be a war, it is between the brokers and the ETF sponsors." He adds, "It is undeniable that ETFs threaten the economies of third-party distribution channels, and, this, of course, was the impetus of Schwab's decision to enter the ETF management business."

What say you? Are you worried that diminished profitibility of your firm will negatively affect your payout and other perks?