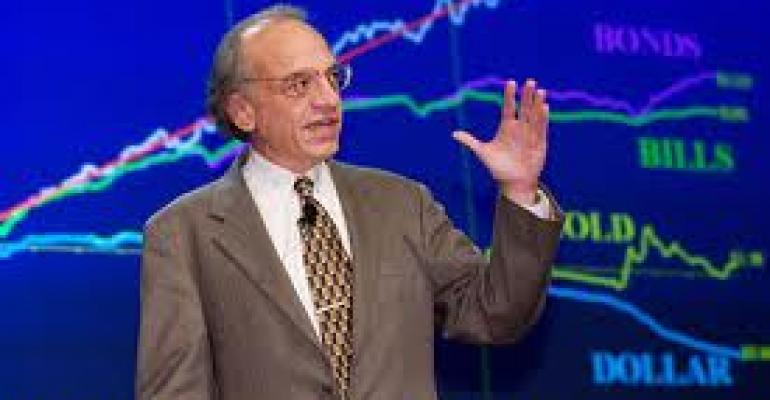 Earnings Momentum Is Fading; But Still Take a Bullish Stance

Last week I attended the TD Ameritrade Institutional Annual Conference and was treated to a rousing, animated lecture by Prof. Jeremy Siegel of Wharton and WisdomTree ETF family. Boy, was he bullish. It was if it were a pep rally for stocks, particularly dividend-paying equities. Bonds? Nah, Siegel said there has rarely been such an opportune time to sell bonds and run to the other side of the boat and buy stocks. He said earnings were strong, company balance sheets in good shape. But, my hero Steve Leuthold's research time, while bullish, concludes, "Earnings moment is fading." Huh?

Leuthold Group analysts Andrew Engel and Eric Weigel say that for the past "five consecutive quarters, ther ratio of up/down earnings for the 'one month' results has declined from the previous quarterly ratio." A cause for concern? Not really, since that is typical of January and not as many companies report in January, because it takes longer to file full-year results. But, the analysts note, "The latest ratio is 1.82, and is now clearly below the 1984 to date average of 1.87. Earnings momentum is fading. "

But . . . there is always a but . . . the analysts say aggregate S&P 500 earnings were good in 2011 "despite macro uncertainties." They continue, "with close to 50% of S&P 500 companies having reported Q4 numbers, the YOY growth for 2011 appears likely to be around 15%, a wonderful result demonstrating the resiliency of companies in the face of monumental macro uncertainties." Further, about 60% of the companies who have reported Q4 results exceeded excpectations." (Emphasis NOT added.)

"The disconnect between the macro-picture and the company level micro picture is expected to continue in 2012, as global GDP expectations are trending down while the S&P 500 is expected to deliver top-line growth of 4.2% and a 10% EPS growth rate." The financial sector may show the strongest EPS growth in 2012; utilities "among the main sectors expected to exhibit negative growth."

The Leuthold Group, which runs the LCORX fund, among others, concludes: "We believe the stock market has further upside from here."