/sites/all/themes/penton_subtheme_wealthmanagement/images/logos/footer.png
Recent
Recent
Workers Worried Retailers Ditching Masks on Vaccine Honor System
May 17, 2021
That New Hybrid Office May Not Be as Flexible as You Hoped For
May 17, 2021
The Post-Covid Office Needs a Makeover to Get Its Workers Back
May 17, 2021
JPMorgan Reopens Offices Across U.S. as Pressure Grows on Rivals
May 17, 2021
Featured
Poll: 15 Classic Books on Investing and the Markets
Apr 03, 2020
Fifteen Must-Listen Business Podcasts for Advisors
Aug 14, 2020
25 U.S. Markets Adding the Most Multifamily Units This Year
Feb 03, 2021
The Top Colleges for Financial Planning
Oct 03, 2019
The Intelligent Investor
brought to you by 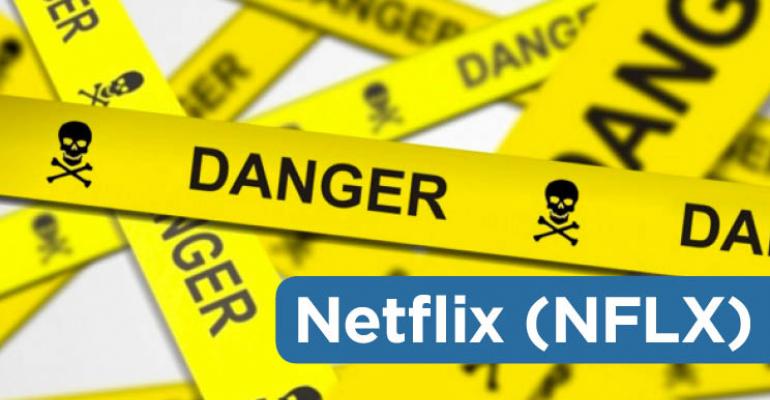 Netflix (NFLX) is in the Danger Zone this week. The DVD subscription and streaming video service has changed the way people watch movies and TV shows. However, its current valuation is out of touch with reasonable expectations for future cash flows and profitability. Even in an ideal world, NFLX would be hard pressed to justify its massive valuation, but with its declining margins and competition from Redbox, Amazon Prime (AMZN), Microsoft’s Xbox (MSFT), and Hulu, NFLX simply has no chance at achieving the growth the market expects.

Since 2010, NFLX has seen its after tax profit margin (NOPAT margin) decrease from 8% to 1%. This decline has come about for three reasons: rising content costs, declining DVD subscription sales, and the high costs of expanding internationally.

The last of these issues, the international expansion cost, will probably be reversed over time, though that may still be several years off. The other two issues, unfortunately, appear to be long-term problems that could permanently suppress NFLX’s profit margins.

The decline in DVD subscribers is more troubling than you might think. By now we’ve come to think of NFLX as primarily a streaming service, but of its three segments (Domestic Streaming, International Streaming, and Domestic DVD) the DVD service provided the largest share of NFLX’s operating income in 2012. It has an operating margin of nearly 50%, while the Domestic Streaming segment has a much lower operating margin of roughly 20%.

Unfortunately for NFLX, the Domestic DVD segment has seen a membership decline of about 17% this year. The DVD rental market is declining overall, and Outerwall’s (OUTR) Redbox service has taken a large portion of the remaining market share. The long-term prospects of NFLX’s DVD business are unclear at best.

To some extent, NFLX has been the victim of its own success, as the quality of its streaming services is helping to make its own DVD business obsolete. The success of its streaming service has also attracted significant competition, most notably in the form of Hulu and Amazon (AMZN) Prime. Differentiating itself from these competitors will be crucial to NFLX’s long-term success.

The Pressure of Competition

3. Offering a better experience to customers, or

4. Offering a lower price to customers.

Number four doesn’t seem like a great option, as nobody yet has managed to win a price war against Amazon. Similarly, number three is tough, as there’s not that much a company can do to differentiate the streaming experience.

So far, NFLX has stuck with the first two options, and it’s had some definite successes. NFLX’s streaming library remains the larges of its competitors, and its original shows like Orange is the New Black, Arrested Development, and House of Cards have been well received by viewers and critics.

Unfortunately, maintaining a massive content library and producing original shows is a costly endeavor, hence the declining margins. NFLX won’t be able to rest on its laurels either, as Amazon has significantly more resources at its disposal (and little regard for its margins) with which to build its library. Both Amazon and Hulu have invested in their own original programming as well.

If Netflix wants to maintain its competitive advantage and get its margins out of the low single digits, it will need to raise prices. However, history has shown that Netflix members do not respond positively to price increases. The company shed almost 1 million subscribers in 2011 when it announced a new $16 price for streaming and DVD rental services, up from the previous amount of $10. Customers in this sector have many choices, and they will quickly and easily flock to a lower price option whenever needed.

It has been said before that Netflix is priced for perfect execution. However, my DCF analysis shows that Netflix’s stock valuation implies cash flow growth that would make even the most ardent bulls skeptical. To justify its current price of ~$333/share, the company must grow NOPAT by 34% compounded annually for the next 15 years.

Does anyone really believe NFLX is going to achieve that amount of growth? That DCF model assumes NFLX can immediately earn NOPAT margins of 9% (slightly above its 2010 level) while also growing revenue by 15% a year for the next 15 years. As I’ve mentioned above, shifts in the revenue mix, low-cost offerings from competitors and the growing costs of content make achieving a 9% margin anytime soon difficult to believe. The revenue growth projection is attainable in the near term, but competitors and saturation will make it hard to continue that growth for fifteen years.

Admittedly, fundamental analysis has rarely seemed to matter to NFLX. The stock is soaring to unprecedented heights this year despite the fact that the company still hasn’t even rebounded to its 2010 level of profitability. Investors have hyped up a couple encouraging quarters and convinced themselves that NFLX can maintain that quarterly growth for 15 years. Once the hype fades, NFLX could have a long way to fall. Even if we give the company credit for 30% compounded annual growth in NOPAT for 14 years, the stock is only worth $120 today.

Check out my appearance on CNBC last week where I argued the bearish case against NFLX.

Investors should avoid the following ETFs and mutual funds due to their 4% or greater allocation to NFLX and Dangerous rating.