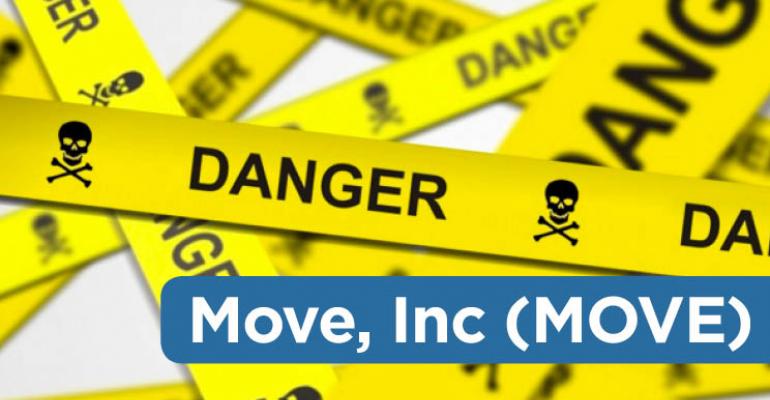 Online real estate service Move, Inc. (MOVE) is in the Danger Zone this week. MOVE operates home and apartment listing sites Realtor.com and Move.com as well as the moving service information site Moving.com. 80% of MOVE’s revenue comes from advertising on these sites.

MOVE has had strong cyclical winds at its back in recent years, and the stock is up 95% year-to-date. The stock is richly valued, and several red flags hidden in the footnotes raise questions about the company’s ability to justify its stock price. MOVE operates in a niche field with significant competition from companies like Zillow (Z) and Trulia (TRLA), not to mention Yahoo (YHOO), which has its own real estate listing site. Clever earnings management and the recovery in the housing market has helped propel MOVE upward this year, but don’t expect the ride to continue. The company is already lagging its competitors and continuing to lose market share.

Managing Earnings To Create The Illusion Of Profits That chart should worry investors, as decreasing advertising expenditures in a competitive, fragmented industry can significantly undermine future profits. This surveyshowed that nearly 80% of corporate executives are willing to sacrifice long-term value in order to hit earnings estimates in the near term. Cutting advertising expense can help in the short-term, but it will likely be a value-destroyer in the long term.

MOVE’s cost-cutting efforts are already creating problems. Despite it being a more established site, traffic on MOVE’s flagship Realtor.com has already been surpassed by Z, which spent 10% of its revenue on advertising in 2012, and TRLA, which increased its ad spending fivefold in 2012.

Red Flags From the Footnotes

MOVE has several red flags hidden in its filings that either take away from the cash flow available to shareholders in the future or cast doubt on the company’s ability to create more cash flow.

Even without the competitive headwinds it faces, MOVE is priced beyond any reasonable growth expectation. MOVE’s current valuation of $14.75/share implies that the company will grow after-tax profit (NOPAT) by 25% compounded annually for 19 years. I’m not sure that any investor out there is willing to make a straight-faced argument that MOVE can meet those expectations.

MOVE hit its five-year high in mid-October and has since lost nearly 20% of its value. Z and TRLA have similarly seen big drops in the past two months. It appears that investors are souring on the online real estate business as a whole. Normally, I caution against investors trying to short momentum stocks, but it looks as though the momentum for MOVE has already been stopped. At these levels, MOVE represents an attractive shorting opportunity with significant downside remaining.

If we give MOVE credit for 14% compounded annual NOPAT growth for 20 years, the stock is worth only $2.50 today. I think MOVE could be a potential acquisition target for a large company like Google (GOOG) or Facebook (FB), so adding a generous buy out premium we can put the fair valuation at about $5/share. I don’t see any company buying out MOVE with its current market cap of $585 million because it would probably be cheaper to develop their own site instead.

I don’t see any real upside for MOVE. The company is growing revenue, but extraordinary revenue growth is already baked into its price. Competitors like Zillow are already attracting more traffic, and the threat of entry by a larger company looms over the industry. MOVE is overpriced and falling behind in a competitive industry.