/sites/all/themes/penton_subtheme_wealthmanagement/images/logos/footer.png
Recent
Recent
Morningstar’s ByAllAccounts Integrates With MaxMyInterest
Jul 14, 2020
Redtail CEO Brian McLaughlin Joins Riskalyze Board of Directors
Jul 14, 2020
RIA M&A: Cash Deal Now, Or Opportunity Later?
Jul 14, 2020
Is Diversity and Inclusion a ‘Nice to Have’ or ‘Must Do’ for You?
Jul 14, 2020
RIA M&A Activity Hit Lows, Highs in Q2
Jul 14, 2020
Featured
Poll: 15 Classic Books on Investing and the Markets
Apr 03, 2020
FICO Updates and Their Impact on Credit Scores
May 06, 2020
Franklin Templeton Fires Portfolio Manager Amy Cooper Involved in Central Park Dog Incident
May 26, 2020
The Top Colleges for Financial Planning
Oct 03, 2019
The Intelligent Investor
brought to you by 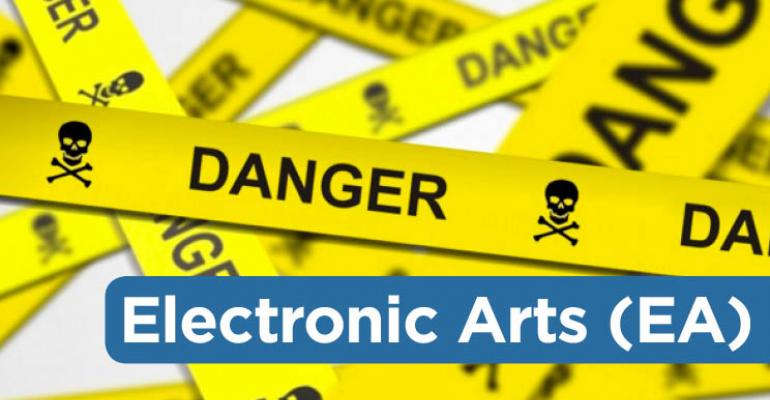 Electronic Arts (EA) dropped sharply last week on news that the video game maker is halting all future projects from developer DICE in order to fix the myriad problems with its blockbuster shooter Battlefield 4. The issues with Battlefield 4 are important on many fronts: They could harm the value of one of EA’s most popular franchises, the effort to fix the problems could keep future games from being released on schedule, and these bugs will continue to damage EA’s reputation with consumers, which is already poor. EA is already one of my Most Dangerous Stocks for December.

Recent Troubles Confirm What Numbers Told Us Long Ago

It’s unfortunate for EA that it had to divert resources from future games to fix Battlefield 4, but the company really didn’t have much of a choice, as the shooter is too important of a franchise. In the fiscal year 2012, Battlefield 3 accounted for 11% of EA’s revenue. Only the FIFA Soccer franchise contributed more to the top line.

A successful game developer is similar to a movie studio in that it has to deliver hit after hit to stay successful. For a while, EA appeared to have cracked the code in the middle part of this decade. By delivering sports franchises like FIFA that could be released year after year and games like The Sims that could be spun off into several different iterations the company saw profits and returns on invested capital (ROIC), which peaked at 93% in 2004, grow to enviable heights.

Unfortunately, that strategy has proven unsustainable. Revenues are in decline. ROIC has plummeted.

Console game sales are falling, and while FIFA has been a stalwart performer for EA, almost all its other franchises are struggling. The company stopped producing NCAA Basketball due to lack of interest after 2009, and contract disputes with the NCAA put the future of its college football games in doubt. From 2009 to 2013, EA’s revenue declined by 3% compounded annually, and its ROIC fell to only 2% last year.

Figure 1 shows how EA has pumped more and more capital into development without commensurate growth in after tax profit (NOPAT). In other words, earnings and margins have held up relatively well compared to the balance sheet, which has ballooned. Diligent investors pay as much attention to balance sheets as they do income statements. The benefit of their diligence is awareness of the severe decline in ROIC and overall profitability of the EA’s business.

The Impossible Challenge For Game Developers

Unable to rely solely on its established franchises, EA knows it has to churn out new games, both on consoles and, increasingly, in the rapidly growing mobile segment. Other companies, like movie studios and book publishers, have thrived in businesses where they have to release hit after hit. However, they have an advantage over game developers in that they don’t have to develop new products organically. They trade their distribution platform for product from scriptwriters, directors, and actors to get their product to the world. Their distribution capabilities, rather than their content, are the key competitive advantage for these media companies.

Game makers have no competitive advantage potential in distribution. They are entirely dependent on content, or new content to be specific, for profit growth. And creating new content is an increasingly competitive business. Independent games for consoles are growing in popularity, and even tiny companies have the resources to create mobile games and distribute them as apps. EA and other big game developers have to keep creating new popular games organically in order to keep up, and that’s difficult to keep doing long term, especially when just updating and maintaining existing franchises requires so many resources already.

EA has undergone a cost-cutting effort in order to compensate for its declining revenues. At first glance, that strategy appears to have been moderately successful, as reported earnings increased by 38% in the fiscal year 2013. However, per Figure 1, these measures have done little to help EA’s dismal ROIC. And, a closer look at the company’s SEC filings reveals some unusual income boosting EA’s earnings.

The company recorded $64 million in pre-tax income due to a change in the fair value of contingent considerations. This earnings boost comes from the decline in the probability of acquired companies meeting their performance targets. Not a bad trick to get an earnings boost from underperformance.

After removing the contingent consideration income and other unusual items, we reveal that EA’s NOPAT actually declined by 33%. Investors need to look beyond reported earnings to find the true profitability.

EA has a major issue with its perception among consumers. For the past two years, readers of The Consumerist voted EA as the worst company in America by a landslide over Bank of America (BAC). Gamers have long expressed their distaste for EA’s track record of glitchy games.  In the mobile gaming segment, the company has acquired a reputation for trying to squeeze every last penny out of gamers through micro transactions. EA’s efforts to fix Battlefield 4 likely stem from its desire to combat its poor reputation.

Even with its 5% drop last week, EA is still priced for an incredible amount of growth. Its current valuation of ~$21/share implies 20% NOPAT growth compounded annually for 20 years. That future performance, assuming 2013 NOPAT margins are maintained, means the company’s revenues would reach $145.6 billion – about the same as GM’s 2012 revenues. More than IBM and Verizon’s 2012 revenues. You get the idea…awfully high expectations.

Think about where the gaming industry was 20 years ago compared to today. This industry can change so rapidly that there’s no way it makes sense to give a game developer agrowth appreciation period of 20 years. The chances are higher that the company might not be around at all in 20 years.

If we give EA credit for only 10 years of 20% NOPAT growth, the stock is worth less than $10 today. Even that prediction seems a little optimistic to me as it assumes that EA will successfully grab and hold on to a large share of the mobile gaming market. EA has done a good job so far of growing its mobile game sales, but we’ve already seen with Zynga (ZNGA) that mobile gaming tastes shift quickly and past hits are no guarantee of future success.

The bullish case for EA rests on the growth of mobile gaming, but the company’s valuation already factors in that potential growth. The upside is priced out of the stock, while downside pressures in the form of flawed game releases, declining console sales, and licensing disputes remain.

Investors should avoid the following ETFs and mutual funds due to their 3+% allocation to EA and Dangerous-or-worse rating.

Disclosure: David Trainer may take a short position in EA within the next 72 hours. David Trainer and Sam McBride receive no compensation to write about any specific stock, sector, or theme.