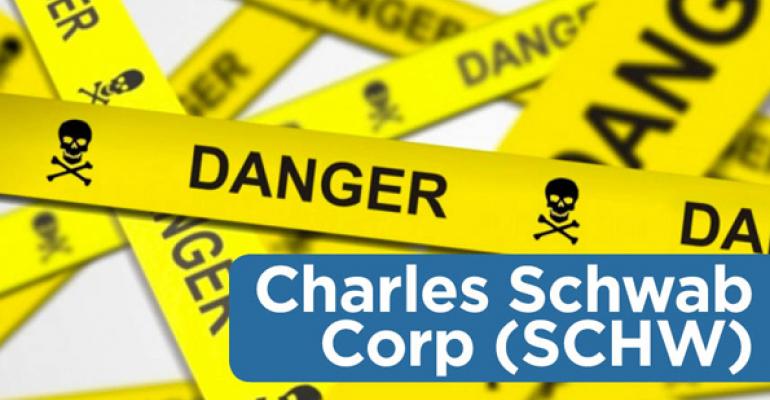 This week, I focus on SCHW to highlight the commoditization of many financial services, especially securities trading, and the competitive pressures on future profitability and growth.

Schwab has been and is a great company. I have deep respect for its focus on serving clients and not participating in many of the predatory practices employed by its competitors.

The company is also the poster child for strategic foresight. It’s bet-the-farm move into online trading in the late 1990s was widely viewed as prescient and daring. The masterful execution of its e-commerce strategy is arguably the best of any major company outside of the Technology Sector.

The problem today is the stock’s valuation. $17.47/share implies the company will execute an even greater and more profitable transformation than the one it made to online trading, and I do not think that is possible.

The major issue for SCHW is that online trading has become increasingly commoditized.

About twenty years ago, offering direct, online market access was a major innovation. Indeed, an entire online investing industry emerged from nowhere within a few years. True to form, Schwab was the leader in bringing the lower costs and empowerment of online trading to millions of investors.

But things have changed. Figure 1 shows that Schwab’s return on invested capital (ROIC) peaked around 2008, as did most financial businesses. Since then, just about everything except for bankruptcies has been in decline.

Figure 1: ROIC Is On the Decline

Just about every bank is looking to grow advisory services given that it is one of the few business lines that still consistently makes money. The revenue pie for advisory services is increasingly crowded. The pieces get smaller with each new competitor.

Not only is the revenue pie getting divided up among more players, it’s been shrinking.First, I think the self-directed investor market has been fully penetrated. There are not any more customers out there to get. Second, trading volumes are lower. Two bubbles within 10 years have taken the wind out of most trading sails. So, there is less trading activity from existing customers. See how trading volatility hasdeclined over the past five years.

For Schwab to grow it business, the company needs to pull another online-trading-like bunny out of its hat. I remember the late 90s picture of several hundred Schwab employees walking across the Golden Gate Bridge to symbolize and celebrate the courage the firm showed in committing to an online trading strategy. They nailed it. But that was then. Now, the competition has caught up, and newer firms are starting to leapfrog SCHW.

Without any legacy software to slow them down, competitors like Trade PMR (private) offer meaningfully better platforms, tools and analytics. These platforms are designed from the ground up to empower and serve advisors, not pilfer their clients. Trade PMR is part of a new wave of platforms that provides a user experience and functionality that are light-years ahead of the old-guard platforms.

I think SCHW and its peers will struggle to compete with upstarts like Trade PMR.

To gain market share, Schwab and its peers must offer unique, value-added research and analytics. Momentum-based analytics and technical trading tools are commodities as well. Those trading strategies have been crowded for a while. And, now that the frenetic pace of trading has subsided, they are not as effective.

Investors crave real insights based on real due diligence. They desire more than aggregated ratings or three-day-old Wall Street reports. The quality of S&P’s (MHP) research is in question after it recently told the SEC that is debt ratings were never meant to be reliable in response to fraud charges. More detailshere.

With its sterling reputation, Schwab is well-positioned to lead a revolution in research quality. Even if it did, though, I doubt that would enable the company to achieve the huge future profits already baked into its stock.

Valuation: Priced For Another Revolution

To justify its current valuation of ~$17.47/share, Schwab must generate compounded annual growth (CAGR) in (NOPAT) of 15% for more than 15 years.

Since 1998, SCHW’s NOPAT CAGR is 8%, and since 2008 it is -9%. The contrast between historical profit growth and current market expectations for future profit growth is striking. Meeting or exceeding the expectations in the current stock price may not be an impossible achievement, but it is certainly not one on which I would bet.

Investors should note that any rise in SCHW from current levels implies even greater future profit growth. The risk/reward of this stock is not attractive. See How to make money picking stocks for more details.

I found Schwab’s 2012 reported earnings to be a bit misleading. Buried on page 91 out of about 150 pages in SCHW’s 10-K is an unusual gain of $70 million due to “a confidential resolution of a vendor dispute”. After tax, that unusual gain overstates net income by 5% and EPS by $0.03. Maybe not a huge issue, but it is material as Schwab reported a 2% gain in net income for 2012. My model shows that net operating profit after tax (NOPAT) actually declined by about 1% last year.

Clearly, the $70 million unusual gain allowed the company to show earnings growth last year. That growth is not indicative of the health of Schwab’s business.

Investors should avoid SCHW. Schwab is not alone in the Financial Sector. Most of the companies in this sector face similar challenges as improvements in technology make traditional (and non-traditional) financial services offerings obsolete.