/sites/all/themes/penton_subtheme_wealthmanagement/images/logos/footer.png
Recent
Recent
Seven Tips to Help Financial Advisor Firms Protect their Customer Lists
May 20, 2022
Nine Must Reads for the CRE Industry Today (May 20, 2022)
May 19, 2022
Dondero’s NexPoint Targets More Than $1 Billion for New Wager on Single-Family Rentals
May 19, 2022
SEC Judges’ Constitutional Cloud Darkens After Appeal Ruling
May 19, 2022
Featured
The 10 Best and 10 Worst States in Which to Retire in 2021
Jul 15, 2021
Poll: 15 Classic Books on Investing and the Markets
Apr 03, 2020
Fifteen Must-Listen Business Podcasts for Advisors
Aug 14, 2020
Celebrity Estates: Jay Leno and Planning for Classic Car Collections
Feb 22, 2022
The Intelligent Investor
brought to you by 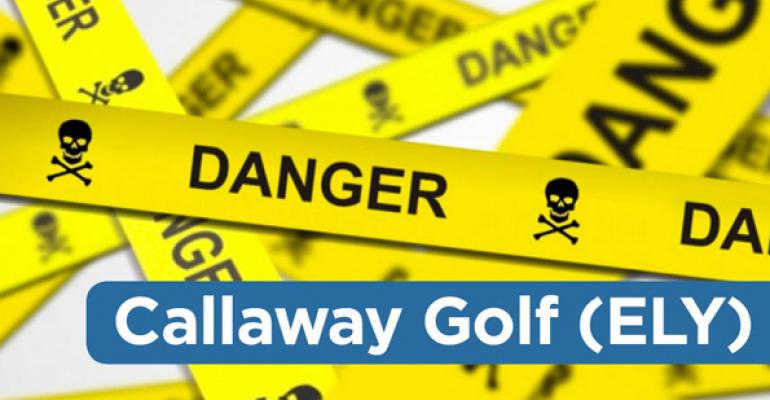 Check out this week’s Danger Zone Interview with Chuck Jaffe of Money Life and MarketWatch.com

Callaway Golf (ELY) is in the Danger Zone this week. ELY is priced for significant profit growth despite declining revenues, increased pressure from competitors, and limited growth potential in the golf equipment industry. Investors should be wary of stocks like ELY where the best-case scenario is already priced in.

Callaway has seen significant decline in its revenues and after tax profit (NOPAT) over the past two years. Between 2010 and 2012 Callaway’s NOPAT declined from nearly break even down to -$51 million, while its total revenue declined by 14%. Callaway’s recent profitability issues are no secret, but a closer look at the numbers suggests that Callaway’s issues could be more serious than many believe.

Figure 1: Change in Advertising Expense vs. Change in Revenues When a company is increasing its advertising budget by that much and not seeing a commensurate growth in sales, investors have to be worried that the value of that company’s brand is eroding. If that graph alone is not enough to convince you of that point, there is more evidence that the Callaway brand is not as strong as it used to be.

Callaway sells a variety of golf clubs, balls, and accessories, but its irons have long been central to the company’s marketing efforts. For years it promoted its irons as “the #1 Irons in Golf”, a claim not made about any of its other products.

Given the emphasis placed upon its irons in marketing efforts, it should be concerning for Callaway investors that the company has seen its iron sales decline significantly both in total and as a percent of the company’s revenue.

Figure 2: Gross Iron Sales and As a Percent of Revenue Decline in Revenues and Profits While Industry Remains Buoyant

While some of Callaway’s struggles can be blamed on the slow recovery of consumer spending after the recession, their issues go deeper than that. US consumer spending on golf equipment has increased slightly over the past two years, so Callaway’s revenues should have at least stayed flat.

Competition Is Only Getting Tougher

Callaway’s market share has been steadily decreasing while its main competitor, TaylorMade, has increased its leadership in the market. From 2004-2008, Callaway and TaylorMade had nearly equal sales. In 2012, TaylorMade’s sales were more than double that of Callaway. TaylorMade is the largest golf company in the world and does not appear to be losing ground to anyone.

TaylorMade has established themselves as the dominant brand in golf over the past few years. They boast 91 tour pros using their clubs compared to only 20 for Callaway. While Callaway discontinued its popular Big Bertha line of clubs in 2009, TaylorMade’s R series and Burner series are among the most recognizable brands in the game. Given the ineffectiveness of Callaway’s marketing efforts so far and their declining capital expenditure, it’s hard to see where the potential is for them to take back significant market share.

Not only is Callaway priced to return to profitability, the current share price implies that Callaway will become more profitable than anytime in the last decade. To justify its share price of ~$6.70, Callaway would need to increase revenues by 15% per year for 11 years and bring its return on invested capital (ROIC) up to 10%. Since 2003, Callaway has never earned an ROIC above 9%.

Revenue growth is unlikely to come from a growing market. Golf equipment sales made only modest gains over the past two years despite a recovering economy, and golf participation has been declining for several years.

With TaylorMade dominating the market place and Callaway’s advertising efforts failing to boost its top line, one would think that increased investment in new products would be the necessary step for Callaway to regain some traction. Instead, Callaway decreased its capital expenditure by 34% last year and 74% since 2008.

Without more investment in new products, it is difficult to see how Calloway could generate the growth expectations in their stock price. It will take more than cost cutting and increased consumer spending for Callaway to have any chance of rewarding investors.

Sam McBride and Greg Slaughter contributed to this report

Disclosure: David Trainer, Sam McBride, and Greg Slaughter receive no compensation to write about any specific stock, sector, or theme.