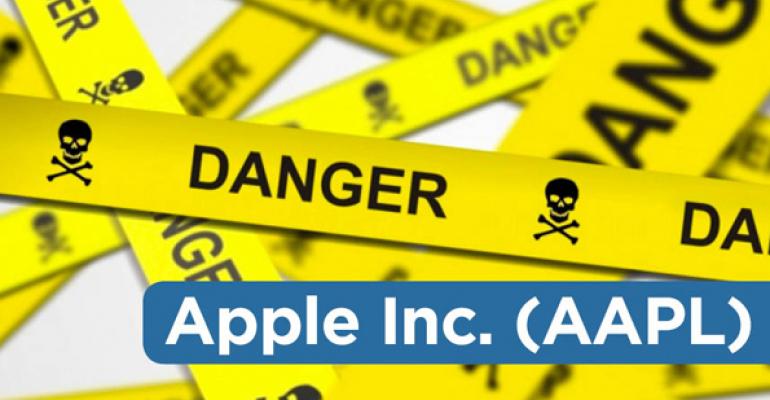 Apple Inc. (AAPL) is in the Danger Zone. Too many investors see AAPL through the rear view mirror and assume that its sky-high profits and return on invested capital (ROIC) are sustainable. As I detail in myCNBC interview, Apple is not cheap and investors should not underestimate the impact of losing Steve Jobs. Without another ground-breaking innovation like the iPhone, Apple is destined to be just another consumer electronics company. And the stock is very expensive relative to other technology and consumer electronics stocks.

Almost a year ago, I wrote a bullish article on Apple, arguing that its sky-high ROIC made it a great value for investors even at such a high price. Since then, the company’s ROIC fell from 340% to 271%. Add the lack of innovation and issues with new products, and I see the recent drop in ROIC as a new trend. Without significant product differentiation, Apple cannot maintain the ultra high profit margins and ROICs.

Comparing Apple’s ROIC to its competitors and industry averages provides fair benchmarks for what might be a more reasonable future level of ROIC for AAPL.

Figure 1 compares Apple’s ROIC to competitors Microsoft (MSFT), Google (GOOG), Blackberry (BBRY) and Dell (DELL) as well as the market-weighted average ROICs of different industry segments. This figure shows just how far Apple’s ROIC could fall if it returns to more normal levels, which I think is inevitable after the departure of Steve Jobs. The problem is that AAPL is priced to maintain a sky-high ROIC of 124%.

Figure 1: Apple Versus its Competitors

No Longer a “Value” Stock

People think AAPL is a value stock, but that’s only the case if one assumes its current ROIC is sustainable. AAPL’s current valuation of ~$452.97/share implies a long-term ROIC of 124%. I think that level of profitability is still too high to maintain.

The “value” in Apple is an illusion. Astute investors need to look at Apple through the lens of what is a reasonable ROIC in the future.

The Law of Competition Reverts ROICs To The Mean

Super high ROICs are a blessing and a curse. On the one hand, a 340% ROIC is an unprecedented achievement for a company Apple’s size. On the other hand, it invites lots of competition from businesses seeking to get in on those high margins.

For years, Apple’s superior products could demand premium pricing. Today, other phone and tablet makers are quickly narrowing the gap between their products and Apple’s. The differences between an iPhone and a Samsung Galaxy or a Motorola Droid are no longer enough to justify a major difference in price.

The loss of Steve Jobs hits Apple extremely hard when it comes to innovation and product quality. His energy, creativity, and attention to detail played a critical role in enabling Apple to stay ahead of the pack for as long as it did. Without him, Apple has not come up with any significant new innovations and appears to be falling a bit behind the competition. The Apple Maps fiasco last year revealed how much the company missed his attention to detail.

Taking the competition to court does not stop them. It only slows them down – at best. Apple’s $1 billion verdict in its patent infringement lawsuit against Samsung last year was encouraging, but that amount was reduced 50% on appeal. Patent suits are very expensive (time and money) and difficult to prosecute. As hard as it tries, Apple will not be able to sue its competitors out of business. Google, Samsung, Blackberry, Microsoft and many other firms will continue to put out phones, computers, and tablets that will be increasingly competitive with or better than Apple products. Apple needs another ground-breaking new product to maintain margins and profit growth.

Do not get me wrong. Apple is still a great company and an American icon that gave us amazing new devices. My point is that a great company does not make a great stock. And AAPL is not a good stock.

Normally I end these articles by warning investors to avoid the ETFs and mutual funds that allocate significantly to the stock in the Danger Zone. With AAPL, there are too many funds to include in this report.

An astounding 664 of the 7,000 ETFs and mutual funds I cover allocate at least 5% of their value to AAPL. Mutual fund managers have caught a serious case of groupthink when it comes to AAPL. No fund manager or ETF provider wants to have to explain to investors why they did not own AAPL if the stock takes off again. So, they keep the allocation rather than do more independent research.

Mutual fund managers and ETF providers are too often focused on performing in line with their peers. That strategy helps protect them from losing market share. In the event of a market downturn or a big drop in a widely-held stock, they are protected from losing assets as long as all or a majority of other funds underperform along with them. The goal is to avoid being singled out and risk losing more assets than peers.

Sam McBride contributed to this article