/sites/all/themes/penton_subtheme_wealthmanagement/images/logos/footer.png
Recent
Recent
Why the Shift to a Longer-Term ‘Business Owner’ Mentality Is Driving Movement
May 27, 2022
NYC Luxury Theft Boss Planned Own ‘Department Store,’ City Says
May 26, 2022
Seven Must Reads for the CRE Industry Today (May 27, 2022)
May 26, 2022
What’s the State of the Capital Markets for Cannabis Real Estate?
May 26, 2022
Featured
The 10 Best and 10 Worst States in Which to Retire in 2021
Jul 15, 2021
Poll: 15 Classic Books on Investing and the Markets
Apr 03, 2020
Fifteen Must-Listen Business Podcasts for Advisors
Aug 14, 2020
Celebrity Estates: Jay Leno and Planning for Classic Car Collections
Feb 22, 2022
Rulebook
brought to you by 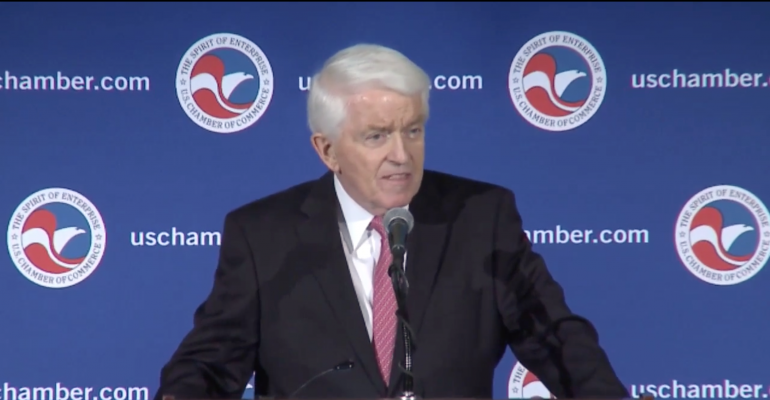 The U.S. Chamber of Commerce said Thursday it will use every tool at its disposal to challenge the Department of Labor’s proposed fiduciary rule, including a potential lawsuit and working with Congress.

“We’ve had very strong conversations with people in Labor and in the White House and what has to happen to that rule for it to be acceptable and not destructive to the retirement system of small companies and others,” said Thomas Donohue, president and CEO, in comments to reporters following his annual State of American Business address.

“If [the finalized rule] looks appropriate, we won’t have to sue. If it’s not appropriate, it’s not just suing; we now have, in the Senate and in the House, much better systems to use the appropriations and other parts of the committee process to work on this deal and we will.”

The Labor Department’s rule would require advisors overseeing retirement plans to act under a fiduciary standard, putting client interests ahead of all other considerations when making investment recommendations on accounts covered under the Employee Retirement Income Security Act.

“This rule could actually limit small businesses’ access to retirement services or lock them out of the retirement market all together,” Donohue said.

Duane Thompson, senior policy analyst for fi360, predicted in October that organizations would likely challenge the rule through lawsuits filed in the D.C. Court of Appeals. He noted at the time, at least one insurance company had already retained the counsel of Gibson, Dunn & Crutcher Partner Eugene Scalia (the son of current Supreme Court justice Antonin Scalia). He declined to specify the company, but added it was a clear signal they were prepping for a legal fight.

Watch the full speech from Donohue below: