/sites/all/themes/penton_subtheme_wealthmanagement/images/logos/footer.png
Recent
Recent
When Clients Get the Pink Slip
May 22, 2020
Reboot Your Work From Home Routine
May 22, 2020
Early Retirement Is Tempting Now. Don’t Do It
May 22, 2020
Digital Metrics Soar at Raymond James, TIAA
May 21, 2020
WealthTech Winners Circle Podcast: TD Ameritrade Bringing the Latest in Innovation
May 21, 2020
Featured
Poll: 15 Classic Books on Investing and the Markets
Apr 03, 2020
FICO Updates and Their Impact on Credit Scores
May 06, 2020
The Top Colleges for Financial Planning
Oct 03, 2019
The 10 Most and 10 Least Valuable College Majors
Aug 28, 2019
Intelligent Advisor
brought to you by 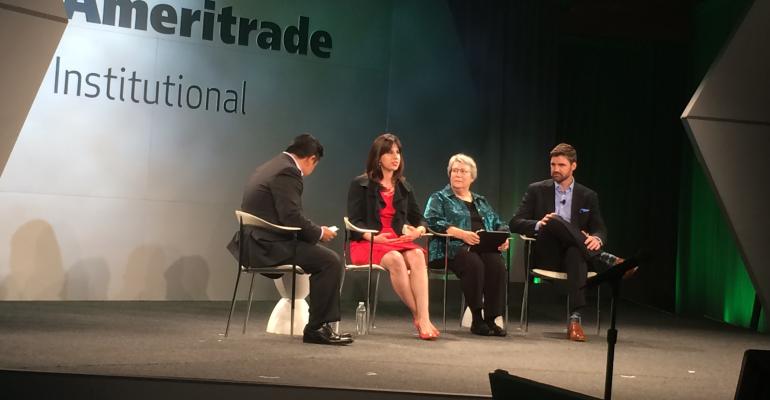 Are You on Facebook? What If You Met Sean Parker’s Mother-in-Law?

Social media does not get the attention it deserves by advisors, said Tina Powell, director of business management at Beacon Wealth Management in Hackensack, N.J. You wouldn’t shut down your website if traffic was down, “So I mean I don’t know why we’re thinking the same for social,” Powell told advisors this afternoon during TD Ameritrade Institutional’s Elite Summit in Laguna Beach, Calif. She believes advisors should look at how social media improves the client experience.

For example, Powell was recently at a graduation party for a young university student that she mentored. She started chatting with his aunt, who surprisingly never asked for her business card.

“So what does she say to me? ‘Are you on Facebook?’ So I said, ‘Yes, of course I’m on Facebook,’” Powell said. “This woman is the mother-in-law to Sean Parker, the co-founder of Facebook.”

Powell plans on inviting the woman to a financial boot camp event for women—via Facebook of course.

In 2012, Powell launched two new Twitter accounts for the firm. But she didn’t quite have buy-in from the rest of the firm.

The accounts are starting to gain momentum. And while they don’t have a huge number of followers, she urges advisors to look beyond the numbers.

Social media can also be used to gather intelligence. Powell created a Twitter feed, for example, on robo-advisors.

“You advisors need to know so many things about so many different subjects. And it’s great if you can pass on a piece of relevant information to inform your clients.”

Beyond Facebook, LinkedIn and Twitter, advisors can also use Slideshare as a way to connect with prospects and clients.

“Every single person in here has a deck,” she said. “Put that on Slideshare and get some views. Start telling your story.”