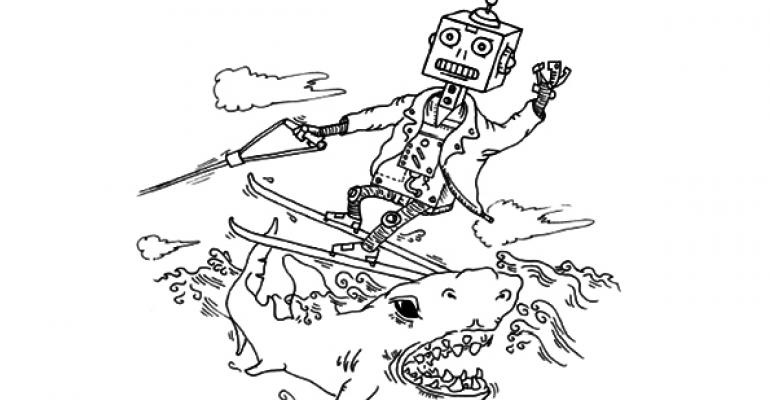 Are Robo Advisors Following The Path Of Internet-Only Banks?

Do you remember those branchless, Internet-only banks that popped up in mid 1990s?

No? After riding a wave of rapid growth fueled by dotcom-era tech euphoria and media adulation, the companies were all but extinct before the 2008 financial crisis.

Silver Lane Advisors, an M&A advisor to the financial services industry, says the story of Internet banks provides a useful lesson for the new independent automated investment advisory services, commonly known as robo advisors. Peter Nesvold, the managing director of Silver Lane and lead author of the study, says that robo advisors are in danger if they are unable to improve their value proposition before more established financial institutions take over the automated advice market.

“Our point is not to argue that automated financial advice as a service offering is doomed,” Nesvold said. “In fact, we believe quite the opposite, as all indications suggest a groundswell of adoption lays ahead.

“[But] if independent robo advisors do not better capitalize on their head start, then they do seem destined to jump the shark – much like The Fonz and Internet-only banks did decades earlier.”

Consider NetBank, (stylized as the oh-so-very 90s [email protected] when it launched in 1996) which promised online convenience and lower fees ($0.01 per transaction as opposed to $1). The company made an initial public offering a year later and grew at a rate of 2,000 accounts per month. At its 1999 peak, NetBank had about 50,000 accounts and traded at $249 per share, an implied equity market capitalization of $2.24 billion. NetBank was profitable just one year after launch and projected a 30 percent sustainable growth rate for several years out.

Impressive, but not when compared to Wells Fargo’s online platform, which launched around the same time as NetBank and was bringing in 75,000 online accounts per month, 15 percent of which were new customers. Bank of America then got into the game and quickly reached 1.7 million accounts in 1999.

Customer acquisition costs started to spiral for Internet banks. They also had trouble selling loan products, leading to compressed margins, which Nesvold said might have been an effect of the branchless strategy.

“In effect, all of the cost savings from NetBank’s branchless strategy were being passed through to the customer, which, in turn, appeared to be reluctant about deepening its relationship with the company vis-à-vis purchasing additional products,” Nesvold said. The concept of online banking survived and is now ubiquitous, but the pioneers, the Internet-only banks, are gone.

Nesvold added that in many regards, robo advisors are repeating the narrative. With digital convenience and low fees, companies like Betterment and Wealthfront have grown impressively in their first few years, each surpassing $2 billion in assets under management.

But in just three months, an automated service from Charles Schwab leapfrogged the competition, and now their Intelligent Portfolios robo manages $5 billion. Vanguard has a hybrid robo offering for wealthier clients, BlackRock and Northwestern have both acquired robo advisors, and nearly every major brokerage has hinted at plans to include automated investing in the near future.

Robo advisors also haven’t grown as much as the Internet-only banks did, and still haven’t generated a return for their venture capital backers. Nesvold said independent robo advisers are going to have to spend more on advertising to compete with the brand-name financial institutions, as well as add higher service levels.

“Going forward, it is our view that most customers will look to the Internet as just an additional delivery channel to complement the way they currently access their investment accounts, much like they already use online banking,” Nesvold said.

That said, Nesvold doesn’t think robo advisors are doomed. There’s a big market opportunity, and Nesvold says he’s optimistic that the current generation of fintech has significant room to grow.

“Robo advisors will likely steal some share from other products, such as target date funds and even online brokerage,” Nesvold said. “However, some industry participants believe that the biggest component is likely to come from people who aren’t getting any advice currently. Point being, automated financial advice is likely to be accretive to overall industry AUM – but not 100 percent additive.”

Nesvold doesn't think robos will cause an an across-the-board fee reduction for traditional advisors, but will bring more transparency to fee discussions. Advisors won’t be able to justify charging 1.5 percent to simply manage a portfolio of ETFs, but advisors could automate this part of their business and provide value to clients in other ways. In the end, RIAs could benefit the most from the robo revolution.

What the parallel to Internet-only banks does show is a need for the independent robo advisors to enhance their value proposition, and fast. Otherwise, they may soon repeat history and soon “jump the shark.”