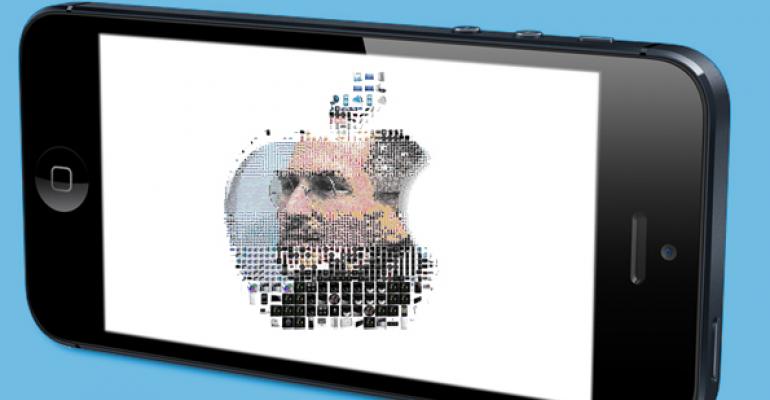 By now the whole world knows that Apple (AAPL) released two new iPhones earlier this month. The iPhone 5S is the new upgraded model with a fingerprint scanner and increased processing power, while the iPhone 5C is a cheaper, plastic phone with roughly similar specs to the old iPhone 5. As evidenced by the 10% decline in AAPL’s stock price since the announcement, the new devices have underwhelmed investors. These latest events support my bearish thesis from May of this year.

AAPL Without Steve Jobs is Worth Much Less

I am not sure anyone is or has been as good as Steve Jobs at innovating. Tim Cook is a good CEO, he’s just not good enough to keep Apple enough ahead of the competition to maintain the company’s sky-highROIC of 270%.

A more normal ROIC (~50%) implies a price of ~$240/share as I explained on CNBC’s Squawk in the Street. I explain my Apple valuation model in the Truth Behind AAPL’s Numbers.

Cannot Break The Law Of Competition

Apple’s sky-high ROIC will revert to the mean because the law of competition dictates that eventuality for every business. The higher the ROIC, the more competition a business invites. Those competitors are attracted to the opportunity to generate high cash flows (i.e. NOPAT) from their investments even if those cash flows returns are slight lower than their competition. As more competitors enter, ROIC and margins decline further. This process continues until economic profit margins (ROIC minus WACC) approach zero at which point competition abates because few people are interested in businesses that generate razor-thin profits margins.

I do not think it takes a genius to see that competition is catching up with Apple and that its ROIC is on the decline because of the competition’s willingness to accept lower ROICs.

Signals Of Decline In Innovative Capacity

Making matters worse, Apple’s recent focus on buybacks and dividends suggests that the company has lost its way in terms of innovation. It led the way for a while with several innovative new products, but without Steve Jobs at the helm Apple can’t expect to perpetually stay at the front of the pack. Samsung’s new smart watch, which has come out while Apple’s much hyped “iWatch” remains purely hypothetical, shows that other companies are starting to do some innovating of their own.

The iPhone 5S lacks any significant new features that make it worth a premium price over rival devices. The fingerprint scanner reduces the mild inconvenience of entering a passcode while bringing with it a whole host of security and privacy fears. The new 64-bit chip in the 5S is impressive, but it won’t meaningfully enhance the experience for the majority of users who don’t perform overly complicated tasks with their phones. Plus, Samsung is already preparing to launch its own smartphone with 64-bit processing. Meanwhile, the new camera on the 5S is still playing catch up to the Nokia Lumia 1020.

Even the rate of improvement of Apple products has declined. And Apple’s rate of innovation has drastically declined.

Apple’s new 5C signals Apple’s ill-fated attempt to maintain margins and grow market share. Well, the 5C disappointed many who expected Apple’s “cheap” new phone to actually be cheap. Instead, the 5C has a sticker price of $549 and will cost $100 with a two-year contract. In China, the 5C will cost the equivalent of $730 without a contract. Apple is not going to gain market share in China when its “cheap” phone costs twice as much as some new Android phones. Interviews with some of China’s biggest Apple fans reveal that demand for Apple products has declined big time. Meanwhile, China Mobile’s reluctance to hammer out a deal with Apple does not exactly signal that there is lots of demand for Apple phones either.

Apple can no longer justify premium pricing on its products, as evidenced by its declining market share. Google’s (GOOG) Android and Google Play have taken over from iOS and the iTunes store as the largest mobile ecosystem, and Samsung phones make up over 30% of the global smartphone market while Apple’s market share has dropped from 16% to 13% in the last year.

No Longer a “Value” Stock

People think AAPL is a value stock, but that’s only the case if one assumes its current ROIC is sustainable. AAPL’s current valuation of ~$460/share implies a long-term ROIC of 130%. I think that level of profitability is way too high to maintain.

The “value” in Apple is an illusion. Astute investors need to look at Apple through the lens of what is a reasonable ROIC in the future.