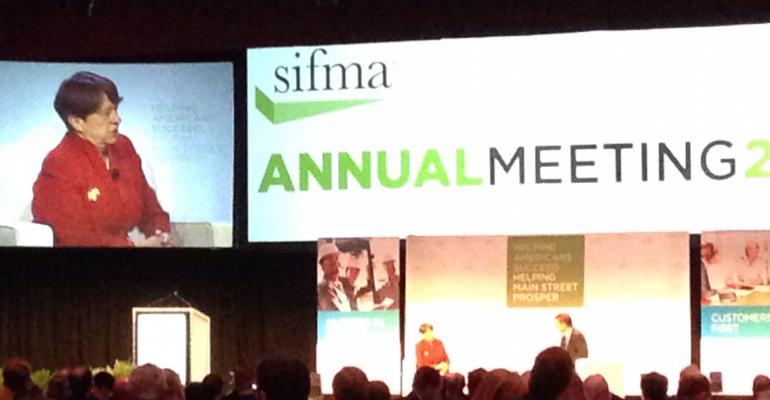 A fiduciary standard seems to be falling behind a long list of other priorities at the U.S. Securities Exchange Commission these days. Chair Mary Jo White said Tuesday during SIFMA’s Annual Meeting that there was no timetable in place for pushing out rulemaking in this area.

“I don’t have a timeline on that,” White says. “I’ll say that I’ve directed staff and resources to it.” White told attendees that the SEC was given clear authority, not a mandate, to impose a uniform fiduciary duty among advisors. “It’s a high priority for me to figure out where we’re going with that,” she says.

The challenge, according to White, is that brokers and investment advisors essentially are providing the same advice to retail customers. But investors are not entirely sure if they are dealing with fiduciary or suitability standard, something that gives the SEC pause.  At the same time, White noted that one of the biggest challenges in rulemaking—in every area—is balancing investor protection without creating unreasonable burdens on the market and financial industry.

In terms of the potentially competing fiduciary rulemaking at the Department of Labor, White says that agency is obviously studying the issue from a very different, ERISA perspective. White added that people need to realize that the two are different agencies with slightly different missions, but yet both are in constant communication.  “I’m personally engaging in that dialogue as well,” White assured SIFMA attendees.

While a proposed rule around a fiduciary standard may be out of the picture for the near-future, Dodd-Frank rulemaking remains high on White’s “to-do” list. “One of priorities is to complete our congressional mandate,” she says. The agency will begin to see a light at the end of the tunnel for its Dodd-Frank mandates by the end of the first quarter next year, White says.