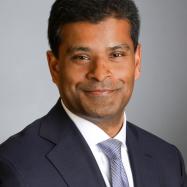 Tony Oommen is a vice president and charitable planning consultant for Fidelity Charitable®, an independent public charity that has helped donors support more than 278,000 nonprofit organizations with nearly $35 billion in grants. The mission of Fidelity Charitable® is to grow the American tradition of philanthropy by providing programs that make charitable giving accessible, simple, and effective.

Before joining Fidelity Charitable in 2015, Tony spent nearly two decades as an advisor himself, developing a passion along the way for helping develop charitable giving plans for clients. He held various roles as a wealth advisor and financial planner for private wealth management firms in Chicago and Cincinnati since 1998.

He is currently a member of the Chicago Estate Planning Council and the Chicago Council on Planned Giving. He volunteers as a board member of the non-profit organizations Associated Colleges of Illinois and 21st Century Dads. He also serves on giving advisory committees for the Ann and Robert H. Lurie Children’s Hospital, Greenhouse Scholars, and WTTW/WFMT. Tony is the author of the philanthropy chapter in Tools & Techniques of Estate Planning for Modern Families, 3rd Edition, National Underwriter, 2018.

Tony received his bachelor of science degree from the University of Illinois at Urbana-Champaign in 1993. He has a Certified Financial Planner (CFP®) designation since 2004.

From Capital Gains to Charitable Gifts
Dec 10, 2019
A tax-savvy strategy for clients.