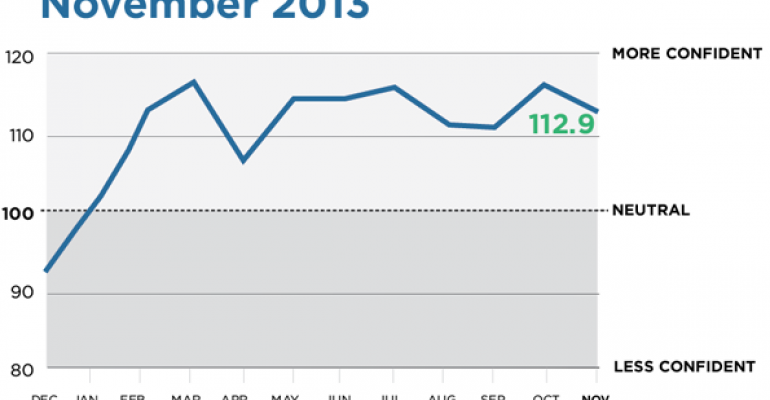 The latest Advisor Confidence Index from WealthManagement.com shows advisors optimism in the markets and the economy over the next twelve months has grown dimmer.

New York, NY—December 1, 2013 Financial advisors are increasingly less optimistic about the economy and markets over the course of 2014, as many cite a bull market that has run its course, the inevitable tapering of quantitative easing, and the federal government’s inability to come to agreement on fiscal concerns.

The WealthManagement.com Advisor Confidence Index, a benchmark of financial advisors’ views on both the current and future state of the economy and the stock market, fell 2.24 percent to 112.87. While that’s still considered optimistic, advisors’ views of the economy in twelve months time, as well as the near-term performance of the stock market, both dropped dramatically.

Advisors’ confidence in the current state of the economy was exactly flat compared to the previous month, but dropped 4.7 percent when asked about their confidence in the economy in one year’s time. Many advisors cited government gridlock as the reasons behind more measured economic growth.

“I think the increasing turmoil in Washington, via the government shutdown, the Obamacare missteps and costs, will be too much for the meager recovery. I think we'll start to see even less economic growth,” said Ben Simiskey, owner of PLS Advisory in Houston.

Arthur Salzer of Northland Wealth Management agrees. “The next hurdle comes in February as congress renews debt ceiling negotiations which coincide with most analyst's expectations for Fed tapering. Valuations in emerging markets are becoming more attractive relative to the US, but that comes with one caveat: in a world of many uncertainties, the US dollar proves to be a safe haven.”

Advisors optimism over the short-term direction of the stock market has also dimmed, falling 5.9 percent over last month’s reading, suggesting many believe the bull market in equities has perhaps run its course.

“Given the current overvaluation of the stock market, equal to or worse than the 2000 and 2007 peaks, it's hard to be bullish,” says David Ware of Barrington Capital Management in Chicago.

Many advisors pointed to clients who are now expressing an interest in getting back into the markets given the rally. “It seems to be a ‘what happened?’ experience for the many investors still on the sidelines. Based on our website activity and new investors coming back in to equities, they missed the huge rally and just now are feeling comfortable with more risk,” said Gabriel Burczyk, president and chief investment officer of Wrapmanager, an investment advisor for high net worth clients in San Francisco.

Many advisors continue to see the federal reserves stimulus programs propping up stock markets, and suggest that fed chairman designee Janet Yellen will continue with the Fed’s dovish policies. “No change in Fed policy means markets will go up,” said Douglas Stone of SeaCrest Wealth Management in Oregon.

“It is sad to say but true that Janet Yellen now holds the short term future of stocks in her hands. She has already committed to being one of the "good hands" people. Let the good times roll,” said Peter Pottle of Pottle Financial Services in Pinehurst, North Carolina.

Not all believe that the inevitable tapering of quantitative easing, and subsequent rising interest rates, means markets will fall.

“Contrary to popular opinion, rising interest rates do not necessarily foretell a falling stock market. Interest rates could well rise because of an overwhelming demand for capital driven by overwhelming economic opportunity. Fed “Tapering” turns on the Shot Clock. Capitalists will need to take their shot or lose the opportunity to score,” said Jonathan Foster, President & CEO, Angeles Wealth Management in Santa Monica. 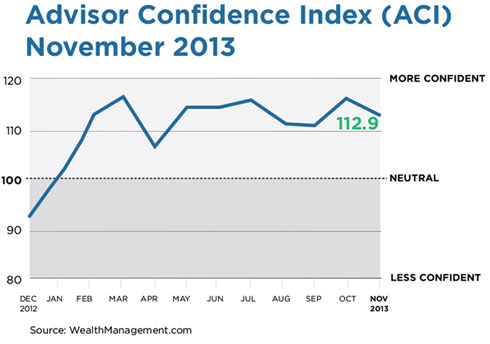 About Advisor Confidence Index’s Methodology
The Advisor Confidence Index is a benchmark that gauges advisors’ views on the economy. The ACI captures the views of a panel of 130 financial advisors, all of whom agreed to respond to the survey. The survey asks four questions – an advisor’s view on the economy, the economy in six months, the economy in twelve months and the stock market – on a scale from most pessimistic to most optimistic. The cumulative average is calculated for each question and then added for the overall benchmark.

About Penton
For millions of business owners and decision-makers, Penton makes the difference every day. We engage our professional users by providing actionable ideas and insights, data and workflow tools, community and networking, both in person and virtually, all with deep relevance to their specific industries. We then activate this engagement by connecting users with tens of thousands of targeted providers of products and services to help drive business growth. Learn more about our company at www.penton.com.