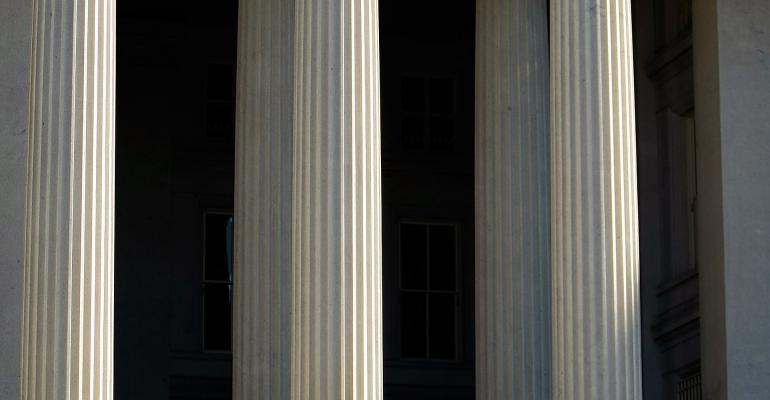 A Big Leap for Annuities in Retirement Plans

New rules released today would make it possible to access longevity annuities in retirement plans without being subject to required minimum distribution regulations. But will it get buy-in?

“I think today’s ruling is really around focusing on lifetime income—that that is the missing piece of the puzzle in the 401(k) space,” said Chip Castille, managing director and head of BlackRock’s U.S. retirement group. “A lot of these rules were initially set up when people weren’t living so long or using their 401(k) plans to fund long times in retirement.

“Having an annuity that’s ready to step in if you live longer than expected makes a lot of sense, and it’s a very efficient way of getting lifetime income.”

But the new rules amend the RMD regulations so that longevity annuity payments will not need to begin early to comply with those regulations. The new rules would allow plan participants to use up to 25 percent of their account balance or $125,000 to purchase a longevity annuity without having to comply with RMDs. The rules also include a “return of premium” death benefit, meaning that if a participant dies before or after the age when the annuity begins, the premiums they paid will be returned to their accounts. If an individual goes above the 25 percent or $125,000 limits inadvertently, they can correct that without disqualifying the annuity purchase. A qualifying longevity annuity contract must state that it is intended to be one when it’s issued, the Treasury said.

“The investing public doesn’t like the term annuity or just the handcuffs that an annuity gives them when they lock into an annuity and the money’s gone,” said Joe Connell, president of Retirement Plan Partners. “So I think some of the protections about having return of premium and death benefit, giving insurers the opportunity to build that into the product is going to help give a more positive reception to the annuity that you’re at least going to get your premium back.”

The Insured Retirement Institute commended the Treasury and IRS on the new rules, saying they will make lifetime income more readily available to Americans.

“LIMRA Secure Retirement Institute research shows that for seven in 10 Americans, their top goal for retirement is having enough money to last a lifetime," said Alison Salka, senior vice president and director of LIMRA research. "With fewer people having access to a pension, managing longevity risk has become a big issue for retirees, who are likely facing 20-30 years in retirement."

But will advisors and employees buy into the idea of deferred income annuities?

“Most people have a negative perception about insurance,” said Alan Lavine, contributing writer to WealthManagement.com and author of some 15 books on investments and insurance. “Advisors need the skills to educate workers about the pros and cons of deferred income annuities, while taking care to follow ERISA, SEC and insurance regulations.”

Although nearly 60 percent of private-sector American workers have access to a defined contribution plan through their employers, most plans fail to offer an income annuity, according to LIMRA, a marketing and research firm for the life insurance industry. But LIMRA’s Secure Retirement Institute poll indicates 90 percent of workers under age 34 think employers should offer ways to convert savings into retirement income.

Connell believes the rule is a good first step in solving the problem of retirement income, but it doesn’t give plan sponsors the protections they want in terms of who they choose to be the provider.

“You’re buying a product from somebody at age 55 or 60, and you’re not going to get the income until you’re 75 or 80,” he said. “A lot can happen in that 15 years to a company. So I think a lot of plan sponsors are going to be concerned with, ‘What is our liability by letting a certain company or even several companies compete for that business if, in fact, something happens to the insurance provider?’”

Annuities have also been a hard sell to financial advisors, who have often criticized them for their high fees and their complexities. According to a recent survey by the Financial Planning Association, 41 percent of advisors are currently using or recommending variable annuities, down from 58 percent in 2006 and 2008. Only 29 percent are using fixed annuities, compared to 49 percent in 2010.

Because the annuities are inside of a plan, the higher commissions that are typically generated might not be built into the product, Connell said.

Kevin McKinley, principal and owner of McKinley Money and author of Make Your Kid a Millionaire, believes the rules will help advisors with clients who are more concerned about outliving income than they are about depositing money toward a return that may be a long way off. It could also be used for clients who aren’t worried about giving up some control and liquidity and would like to reduce potential RMD amounts.

In a low interest rate environment—with the 10-year Treasury hovering around 2.5 percent—annuities offer an attractive yield for clients who have a long planning horizon in retirement, Castille added.

“So the longer we stay in a low-rate environment, the more the creative advisors are going to look at this in a new light, and say, ‘OK what is the right use here for an annuity?’ That will be interesting to see.”