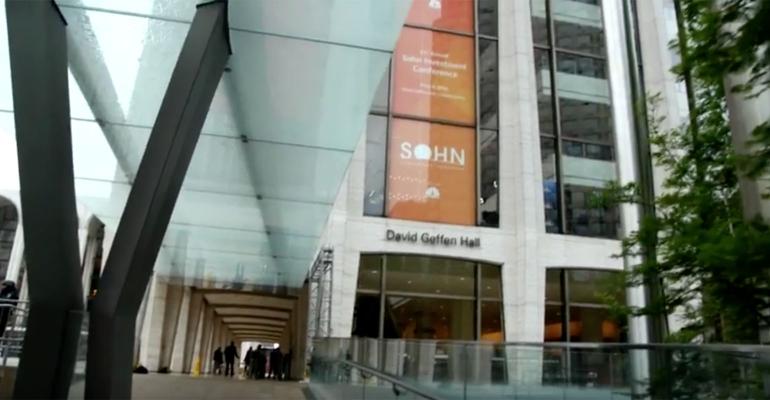 Since 1995, heavyweight fund managers have stood before their peers at the Sohn Investment Conference to share their most compelling views. Today in New York, they’ll do it again.

The upshot: While MTN’s American depositary receipts had a total return of less than 1 percent in the past year. In February, the company reported a full year loss after underperforming in those markets. It also agreed to pay a $1 billion fine in Nigeria for missing a deadline to disconnect 5.1 million customers. The upshot: Well, you know what happened. We’ll see what happens with the deficit.

Another call: A pair trade. Long a mortgage REIT exchange-traded fund and short a utilities ETF.

The upshot: The iShares Mortgage Real Estate ETF has produced a total return of almost 29 percent in the year. The Utilities Select Sector SPDR has gained 8 percent.

Note: On Friday, Gundlach said that the trade with "one turn of leverage” is up 40 percent since the conference. The call: Bearish on stocks, bullish on gold. The bull market in stocks has “exhausted itself” and the metal was his largest currency allocation, he told the conference.

The upshot: The S&P 500 index is up 19 percent since last May. Gold is down 4 percent. Druckenmiller has said he sold all his gold on the night of the U.S. presidential election but bought gold in late December and January because it “ was down a lot.” The call: The activist investor said drugmaker Depomed Inc., in which Starboard owned a stake, could be an “extremely attractive” acquisition target.

The upshot: The stock has lost one-third of its value in the past year and the chief executive was replaced.

Note: Starboard waged a proxy fight with Depomed last year and the company agreed to add three directors. Starboard is the second-largest Depomed holder, according to data compiled by Bloomberg. The call: Short Caterpillar Inc. since shares of the machine maker will fall with commodities. Go long General Motors Co. on the prospect of higher auto sales.

The upshot: Caterpillar is up 39 percent. GM has gained 13 percent since the conference though it was up almost 25 percent through March.

Note: In March, Einhorn urged GM to set up two classes of common stock, saying the move would boost shareholder value by $38 billion. The company rebuffed the proposal. Greenlight has held GM shares since 2011.