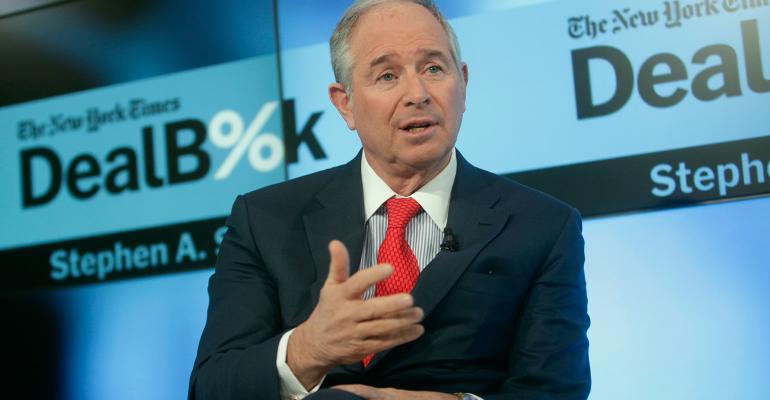 Five years ago, Carlyle Group LP’s David Rubenstein predicted a future where ordinary savers would be able to invest in private equity, an industry limited to wealthy individuals and institutions. He later suggested that by now, Americans would be able to put some of their 401(k) retirement accounts into the asset class.

Today most mom-and-pop investors still don’t have that option. But a shift in how people are saving in their 401(k)s may give private equity a new way in -- keeping firms like Carlyle, Blackstone Group LP and KKR & Co. eyeing the $4.8 trillion that U.S. workers have saved in their 401(k)s.

“In life you have to have a dream,” Steve Schwarzman, Blackstone’s chief executive officer, said on a call with analysts in January. “And one of the dreams is our desire -- and the market’s need -- to have more access” between alternative-investment funds and ordinary savers. It was a bold and telling statement coming from the helm of the world’s largest private equity firm.

Offering private equity to individuals has been a challenge because the investments are often hard to convert to cash quickly and they charge fees higher than those of traditional mutual funds that populate 401(k)s. Such retirement plans value assets on a daily basis, presenting a challenge for private equity firms that hold dozens of years-long investments. While private equity’s pitch is that it offers greater returns than traditional mutual funds, it may be hard to ensure each plan participant gets the best of what the asset class has to offer.

“There’s a lot of sensitivity to fees, and you’d need to demonstrate a huge amount of alpha to a participant to justify putting private equity in a plan,” said Brooks Herman, head of data and research at BrightScope Inc., which rates retirement plans. “You’re holding an asset that can be less transparent with its holdings, and the returns can be staggering in their difference between top quartile and bottom.”

Private equity is tackling 401(k) barriers as ordinary savers increasingly become the investors of their own retirement. Before, many employers would manage retirement funds for employees through defined-benefit pensions, allocating a pool of employee funds to a mix of assets -- including private equity. Today, many employers are instead opting for defined-contribution plans like 401(k)s, making individuals responsible for funding their accounts and picking investments.

Inflows into private-sector 401(k)s have outpaced those into corporate pensions every year since 1987, according to 2014 figures, the latest available from Department of Labor data tabulated by the Investment Company Institute. Americans and their employers put $349 billion into 401(k)s in 2014, more than 3.5 times the volume that flowed into pensions, the data show.

While the shift is loosening private equity’s grip on mom and pop’s retirement dollar, the growing use of target-date funds may offer private equity a chance to get back in. Unlike a pure stock or bond fund, a target-date fund mixes asset classes and adjusts the balance over an employee’s career to optimize returns for a target retirement year -- much like a mini pension fund. Such funds are offered by about three-quarters of 401(k) plans, up from a third in 2006, according to 2014 data from BrightScope.

By layering itself amid a mix of assets designed to be left alone for decades, private equity could operate like it always has: part of a broader asset allocation, taking more risk to chase higher returns, and left to mature in due time.

To be successful, private equity firms must convince regular investors that they’re missing out on better returns. There’s some evidence to suggest they can help. The industry has generated 13 percent annualized returns after fees over the past 25 years, according to advisory firm Cambridge Associates’ U.S. private equity index. That compares with 9.3 percent in the S&P 500 Index and 6.1 percent in the Bloomberg Barclays Government/Credit Bond Index.

“While allocating a portion of your 401(k) portfolio to private equity may not pay for beach-front property in the Hamptons, there’s more and more interest because of attractive returns in private equity and disappointing returns in other areas,” said Mitchell Tanzman, the co-CEO of Central Park Group, which allocates money for wealthy individuals to firms including Carlyle and Blackstone.

Some firms including New York-based KKR are hoping to score retirement money through an effort started by Pantheon Ventures, a London-based private equity firm that’s trying to get companies with 401(k)s more comfortable with the asset class. Companies are afraid of adding private equity because they can be sued by employees for offering complex products that charge higher fees.

To address the fear, Pantheon offers performance-based pricing on its fund-of-funds strategy: The firm earns a fee when performance exceeds the S&P 500 and returns money if it lags. Pantheon will mix private equity investments managed by KKR and other firms with cash and shares of an S&P 500 exchange-traded fund to offset liquidity concerns. It’s also developed a model to help value assets on a daily basis.

“Fundraising is all about knocking down barriers,” said Kevin Albert, Pantheon’s global head of business development. “They say they don’t want to invest with you because of one reason, so you fix it and keep reiterating.”

Partners Group Holding AG, a Swiss private equity firm, is also shopping a 401(k)-eligible strategy to companies. Investors get a concentrated investment in an existing Partners private equity fund with an allocation to publicly traded private-market investment firms for liquidity, according to Robert Collins, a managing director in the firm’s New York office.

Both Pantheon and Partners designed their strategies for use in target-date funds. They’ve yet to prove it works: Neither firm’s U.S. strategy has yet won money from defined-contribution plans, according to people with knowledge of the matter. KKR declined to comment on how much it expects to raise from the partnership with Pantheon.

“We don’t need the 401(k) market to open up for us to be successful,” said Joan Solotar, head of multi-asset investing and external relations at New York-based Blackstone. “There’s so much else we can do in the meantime, and by the time that market opens, we’ll be there.”

Aside from structural roadblocks such as liquidity that make 401(k)s a challenge, there are real costs to implementation. A flood of new money cracked open by retirement savings would pressure private equity firms to invest bigger volumes of capital, potentially damping returns, Blackstone President Tony James said at an event last month discussing the U.S. retirement system. Still, James has been vocal about the benefits private equity could offer ordinary savers.

The distribution system needed to reach these clients could also be prohibitively expensive, said Jim Burns, the head of KKR’s individual investor business.

“As you try to reach broader and broader audiences, you have to keep a close eye on profitability,” Burns said. “How do you reach those people, how do you structure, distribute and support products? There’s a material cost to that.”

Some efforts have failed. In 2015, Carlyle shut a pair of mutual funds targeting individual investors because of lack of demand and high costs. That followed KKR’s move to close down two debt funds the previous year for similar reasons.

If private equity does find its way onto 401(k) menus, questions persist about risk and suitability. The shadow of the financial crisis looms large whenever a complex investment reaches the masses. Accountability and quality are reasons people should be safeguarded when investing in private equity, said Luis Viceira, a Harvard Business School professor who teaches investment management.

“The 401(k) plan holder at the end of the day is a small investor,” Viceira said. “It may make sense for them to have this exposure, but it has to be structured in a way that they are protected.”