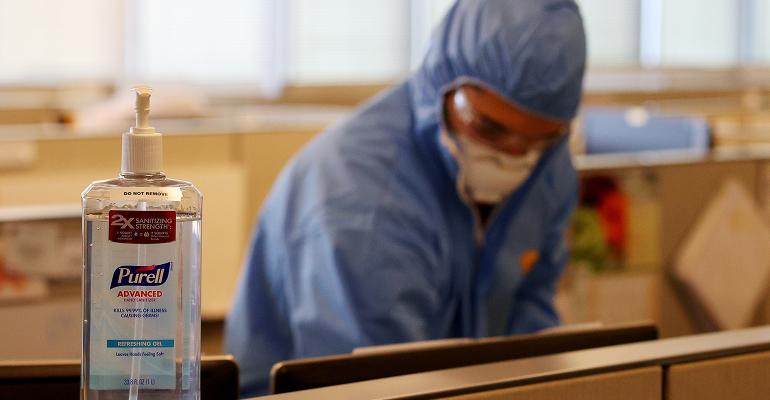 REITs Fly Under the Radar as a Smart Covid Vaccine Trade

You'll probably be heading back to the office long before you decide to jump on a cruise.

(Bloomberg Opinion) -- Monday was an extraordinary day across financial markets. A vaccine developed by Pfizer Inc. and BioNTech SE was heralded as the most encouraging scientific advance so far in the battle against the Covid-19 pandemic and deemed “extraordinary” by Anthony Fauci, director of the National Institute of Allergy and Infectious Diseases. The breakthrough had traders suddenly positioning for a return to normal life sooner than expected.

Some of the most eye-grabbing price swings were in shares of brand-name travel and entertainment companies. The exchange-traded fund JETS, which counts Southwest Airlines Co., Delta Air Lines Inc., United Airlines Holdings Inc. and American Airlines Group Inc. as its four biggest holdings, soared as much as 25%, the biggest intraday move since it was launched in 2015. AMC Entertainment Holdings Inc., the beaten-down theater chain whose shares closed at $2.49 last week, jumped as much as 76% to $4.39. Carnival Corp. surged almost 44%, while the pricier shares of Royal Caribbean Cruises rallied about 35%. Meanwhile, Zoom Video Communications Inc. and Peloton Interactive Inc., two of the biggest beneficiaries of coronavirus lockdowns, each fell at one point by the most on record.

Yet a somewhat under-the-radar trade that could be a clean way to bet on a return to pre-pandemic life might just be real-estate investment trusts. If the coronavirus ultimately proves to be little more than a blip, and it doesn’t radically transform well-established migration patterns in the U.S. or the way many Americans work, it stands to reason that these companies, which own or operate income-producing real estate, will bounce back much like travel and leisure stocks.

Office REITs in particular posted a spectacular comeback on Monday, with those concentrated in New York, such as Vornado Realty Trust and SL Green Realty Corp., surging by a record or near-record amount after languishing for months at levels that were close to the lowest since 2009. More broadly, Vanguard Group Inc.’s Real Estate ETF, the largest of its kind, jumped as much as 10.5% to the highest since early March. REITs tend to be a popular diversifying investment because they trade like stocks but pay out large dividends like fixed-income assets.

It’s easy to understand why shares of cruise lines and movie theaters are surging on the back of unambiguously good news about a coronavirus vaccine. Still, before many Americans feel comfortable hopping aboard a Carnival ship or munching on popcorn at an AMC theater, there’s a good chance they’ll find themselves back at their office, storefront or other place of work. Again, this isn’t universal. While some big tech companies have dangled the option of working remotely indefinitely, most corporate leaders seem to side with JPMorgan Chase & Co. Chief Executive Officer Jamie Dimon, who worries that working from home for too long could bring about “alienation” among younger workers, productivity declines, and long-term economic and social damage.

Anecdotally, I have been coming into Bloomberg’s New York headquarters twice a week for the past month, only easing off in recent days because the city, in the words of Mayor Bill de Blasio, is coming “dangerously close” to a second wave. It was refreshing to be back, chatting (masks up) with my Bloomberg Opinion colleague Justin Fox about the third-quarter GDP report and discussing commuting strategies with editors who are fellow Brooklynites.

Splitting time between the office and home office could mean that premium real estate in mega-cities won’t command the price it once did. But when it comes to REITs, that possibility is reflected even in current trading levels. Both SL Green and Vornado remain lower in price by more than 35% this year and are down almost 50% from five years ago. That’s hardly good news for longtime holders, who might never see the price fully recover. But it presents a sizable discount for those who wager that the largest U.S. city will bounce back once a Covid-19 vaccine makes people more willing and able to commute into midtown and downtown.

As Bloomberg News’s Felice Maranz reported, some analysts have also said REITs tied to lodging, senior living and malls could make a comeback with progress on a vaccine. Still, that feels like a potentially longer road to recovery. People can choose whether to stay at a hotel or shop in a mall. They might not have such flexibility if their employer calls them back to the office, even in shifts or only on certain days.

To be clear, America and the world is still far from that kind of widespread “return to normal” moment. In fact, if history is any guide, the third wave of Covid-19 will likely peak sometime in the next couple of months. But markets are forward-looking, and the Pfizer vaccine has provided a welcome dose of optimism after months of humanity seemingly playing from behind. And yes, a simple Google search of “death of the office” turns up any number of results. But for each of those articles, there’s another on why offices — even ones with open floor plans — will survive and adapt to the post-Covid reality.

So even though, in the words of President-elect Joe Biden, the U.S. is facing a “dark winter,” when Americans come out of hibernation, it’s as likely as ever that they’ll return to a world similar to the one they were accustomed to up until 2020. That means traveling, dining out and, yes, working from the office again.