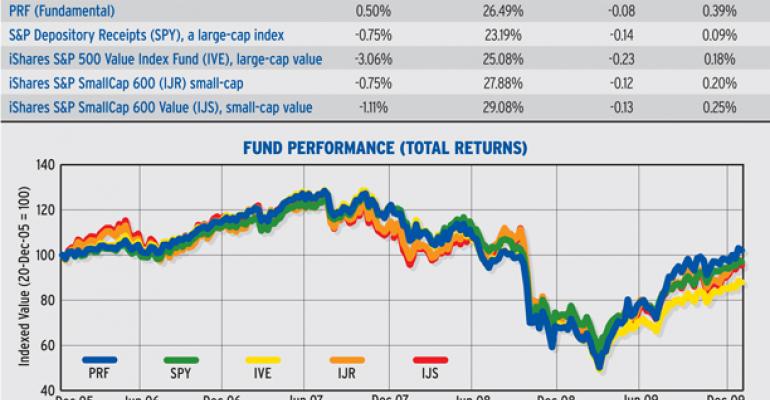 The Price Is NOT (Always) Right

Fundamental index ETFs have been around for nearly five years now. Have they lived up to their claims that they avoid overpriced stocks?

The price is not always right. That, in essence, is what the “fundamental” indexing crowd argues. Put another way, as every financial advisor—indeed every investor—knows, there is a difference between price and value. And now that the efficient market theory is considered officially dead (of course, we all knew that the market never really valued every stock correctly every moment of every day), fundamental indexing is gaining adherents.

Touted as the indexing world’s “new paradigm,” fundamental benchmarks weight the equity universe by valuation metrics such as sales, dividends, cash flow and book value rather than market capitalization, as do many popular indexes, such as the S&P 500. The idea is to avoid overweighting stocks that are priced incorrectly (as in, bid up too much by an irrationally exuberant crowd). Fundamental indexing was kick-started by research published by Robert Arnott, chairman of money manager Research Affiliates, of Newport Beach, Calif. Arnott showed that market-capitalization indexes tend to overweight large growth stocks. More specifically, Arnott made the case that cap-weighted benchmarks really reflect a sort of herd instinct: market caps rise as more and more investors pile into a few stocks, encouraged by the very price increases they themselves precipitate. As a result, a cap-weighted index ends up with a sizable dollop of overvalued companies (and, conversely, underweight underpriced securities). And, that, says Arnott, leads to underperformance.

Better, in Arnott’s view, to weight companies according to their “economic footprint” to get a benchmark that not only yields higher average returns than cap-weighted indexes, but is also less likely to develop “bubbles,” such as the ones that caused the tech and financial sectors to balloon crazily in recent years.

To be sure, Arnott offered compelling backtested data in his treatise, showing his Research Affiliates Fundamental 1000 Index (RAFI) outpacing the S&P 500 by, on average, 197 basis points (1.97 percent) a year over a four-decade period.

One of the beauties about market-weighted index funds, these veterans claim, is that they’re self-adjusting. The indexes automatically adjust for changes in the capitalizations of their portfolio holdings, assuming there’s no change in a company’s share float. They require no turnover. Fundamentally weighted indexes, on the other hand, require regular rebalancing to re-align portfolio weights as book values, sales or other factors vary. As a result, turnover costs are incurred.

These costs aren’t limited to transaction expenses, such as bid/ask spreads and commissions. There are also tax consequences associated with portfolio turnover. One of the much-touted benefits associated with market-weighted indexing is tax efficiency. But a fundamental index fund tends to realize capital gains—the tax liability of which must be passed on to its shareholders—whenever portfolio issues increase in price without offsetting improvements in their fundamental weighting factors. Then, portfolio managers of fundamental index funds are obliged to sell enough of the price-inflated stocks to bring their weights back into balance.

One of the biggest beefs about fundamental index funds, though, concerns their high management fees. Now, you have to put “high” in context. Clearly, fundamental funds cost more than first-generation cap-weighted index products. The cost of a flagship exchange-traded fundamental fund is nearly eight times higher than a comparable market-weighted product. Even so, a fundamental index fund may still be considered “cheap” compared to other actively managed portfolios.

While proponents of fundamental indexing decry the large-cap growth bias of market-weighted benchmarks, they’re countered by complaints that the new paradigm overweights smaller capitalization and value stocks. This issue is especially important for financial advisors and investors who are considering the newer index products as additions or replacements in existing portfolios and wish to avoid style tilts.

That said, Arnott objects to the characterization of RAFI as a small-stock index. “The supposed small-cap bias is a myth,” he argues, pointing out that RAFI’s average market capitalization is on par with that of the Russell 1000 and far exceeds that of the Russell 2000.

In fact, Arnott believes that fundamental index funds will be attractive alternatives to market-weighted portfolios across a wide swath of market scenarios. “RAFI wins reliably in value markets—no surprise there,” he recently told the Journal of Indexes. “In neutral markets, it wins on average over time. In light growth markets, it wins on average over time, but on an ever-diminishing margin as you get into a stronger and stronger growth market. You need a strong growth cycle to overcome the structural advantage of having broken the link between over- and undervaluation and portfolio weight.”

Over the past four years, the fundamental index lived up to its claims in one of the most challenging investment environments imaginable. The first thing to note is that, among the four ETFs mentioned above, the only one to have produced a positive return since December 2005 is the RAFI-based fund. Granted, that’s on a total return basis, which includes a 0.9 percent annual dividend. Without the dividend distribution, the PRF fund actually lost ground at a 0.4 percent average yearly rate. That’s still better than the other funds. The S&P 500-based SPY portfolio, for example, declined at an average annual rate of 2.6 percent before dividends.

So, in real-world trading, score one point for the fundamental index; it truly did live up to its advertisement by outperforming the cap-weighted S&P 500 fund before and after dividends.

Now, about the contention that superior returns can be attained by the fundamental product with less risk, let’s just say that depends upon your definition of risk. If your meter is the annualized standard deviation of portfolio returns, the fundamental-weighted fund actually seems riskier than the market-weighted fund, by a not-so-insignificant 3.3 percent.

Keep in mind, however, that standard deviation assumes upside volatility is just as bad as downside variance. In the real world, of course, most investors would gladly accept higher upside “risk.” Investors in the PowerShares RAFI index, in fact, faced this very choice. Look at the fund’s performance in August 2009. (See chart.) PRF started to really outgun the cap-weighted products to begin clawing its way back to breakeven with its 2005 launch value. PRF’s late-2009/early-2010 outperformance more than made up for the fund’s deeper drawdowns in the latter half of 2008.

Plainly, in real world investing, the fundamental product has been more volatile than the S&P 500 fund, so it can’t really put a chalk mark on the “less risky” box—not if standard deviation is used as the risk metric, anyway. If the Sortino ratio is used, PRF might be able to claim a point. (The Sortino ratio weights downside variance as more risky than upside volatility.)

And what about those style biases? Did they express themselves in the real world? Well, yes and no. ‘Yes’ to a value bias, but ‘no’ to critics’ claim that it has a small-cap tilt. Look at the correlations in Table 2. The PRF fund’s returns are most highly correlated to the iShares large-cap value fund. PRF’s correlation to the IVE portfolio is, in fact, greater than SPY’s.

PRF is not as highly correlated to the iShares IJS small-cap tracker. SPY’s pattern of returns, in fact, is more closely aligned to IJS than PRF’s returns. Whether or not you consider the 0.7 percent differential significant is a matter of personal preference, but on this score, Arnott’s contentions seem to hold out: There is a value bias, but not necessarily one toward small-cap stocks. (Just to make things really fuzzy, though, SPY’s and PRF’s correlations to the iShares IJS small-cap value fund are nearly identical. This indicates the need to control variables for their interactive effects when testing portfolio traits).

Critics’ complaints that fundamental indexes have higher costs haven’t held up well in the last four years of real-world trading. The PRF fund has managed to outperform, before taxes, its market-weighted counterpart, despite a more actively managed portfolio and, to boot, higher management fees. Four years of real world trading hardly gives us enough samplings to say definitively that fundamental indexing delivers better results than cap-weighting but, by and large, it does seem to perform as advertised.

If the fundamental approach works this well in the harum-scarum environment of the past four years, it’ll be more than a little interesting to see how it fares in a low-volatility market. Whenever we get one, that is.