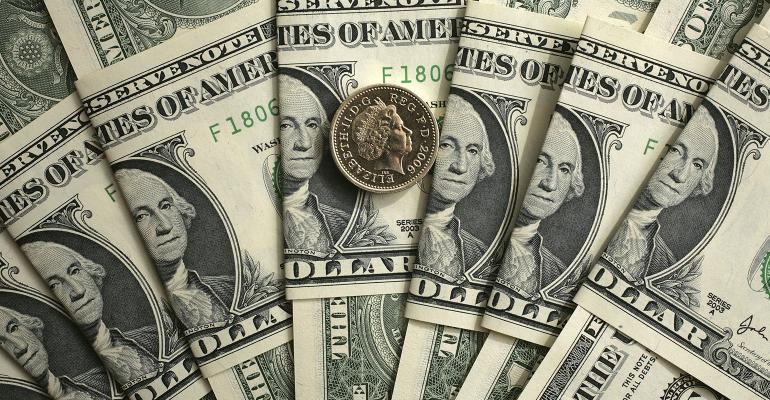 Pound-Dollar Parity Is Now a Possibility for Options Traders

(Bloomberg) -- What was close to unthinkable for the pound before the Brexit vote is now firmly on some traders’ minds.

They’re betting sterling will tumble to parity with the dollar, a level unseen in the U.K. currency’s history. In recent days, a number of wagers were put on for a one-for-one exchange rate, according to Depository Trust & Clearing Corp. data.

The pound, which had already been struggling this week amid growing talk of a so-called hard Brexit, plunged 6.1 percent in Asian hours on Friday to a 31-year low of $1.1841. The slump has made the possibility of a historic $1 level more real: a Bloomberg forecasting model, based on implied volatility, shows about a 7 percent chance of it happening within a year, compared with 3.2 percent yesterday.

“Certainly there are a few calls for parity, yes -- there are a few that are positioned for it, that is their target and objective, or they’re hedged for fear it might go in that direction,” said Neil Jones, head of hedge-fund sales at Mizuho Bank Ltd. in London. “I wouldn’t say it’s a mainstream view,” but “the structural downtrend is probably still intact for now.”

The lowest the pound has fallen versus the greenback in the past four decades is about $1.05 in February 1985. Bank of England data show it hasn’t dropped to parity for at a century.

The cost of hedging against sudden declines in sterling increased, according to risk-reversals data compiled by Bloomberg. The premium on six-month options to sell the currency versus the dollar over those to buy widened to 2 percentage points in the biggest jump since the Brexit result.