/sites/all/themes/penton_subtheme_wealthmanagement/images/logos/footer.png
Recent
Recent
BofA Revamps Wealth Management Product Teams Under Sieg and Knox
Jan 21, 2022
Eight Must Reads for the CRE Industry Today (Jan. 21, 2022)
Jan 20, 2022
CFP Board Announces New Commission to Adjudicate Appeals
Jan 20, 2022
The New 3-Legged Stool for Success
Jan 20, 2022
Featured
The 10 Best and 10 Worst States in Which to Retire in 2021
Jul 15, 2021
Poll: 15 Classic Books on Investing and the Markets
Apr 03, 2020
25 U.S. Markets Adding the Most Multifamily Units This Year
Feb 03, 2021
Fifteen Must-Listen Business Podcasts for Advisors
Aug 14, 2020
Viewpoints
brought to you by 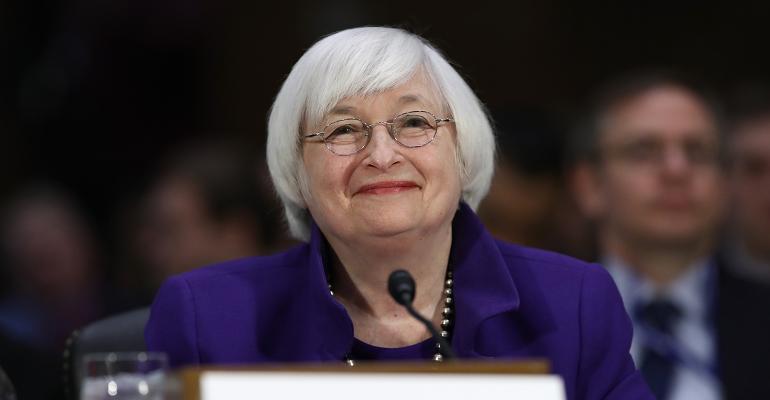 A March Rate Hike: Opportunity Knocked and the FOMC Answered

The Fed will continue to be gradual in its rate hikes, but couldn't pass up this chance.

On Wednesday, the Fed raised rates 25 basis points to 0.75% in a move that was telegraphed by a sharp shift in rhetoric just two weeks ago. This seemingly abrupt rate hike has left markets wondering what, if anything, has changed at the FOMC and where rates are going from here. We still see the Fed taking a gradual approach to removing accommodation this year, which will leave rates low by virtually any historic comparison. Investors will continue to find the search for yield a dominant feature of 2017 and beyond.

Keeping with the gradual theme

The FOMC raised the federal funds target range 25 bps to 0.75–1.00 percent, a move that was entirely discounted by markets. In their statement accompanying the policy move, members focused on inflation, saying it has moved close to the committee’s 2 percent longer-run objective, although they noted inflation expectations were barely changed. Their discussion of the economy reinforced that the labor market continued to strengthen, but that economic activity was growing at a “moderate” pace.1 There was also familiar language that further removal of policy accommodation would be “gradual” and renormalization of rates could proceed “for some time.”

The FOMC also released another set of economic projections, which it does every quarter.2 It showed virtually no reassessment of either growth or interest rate forecasts for 2017, or of longer-run equilibrium assumptions. Critically, the Fed’s median forecast remains a total of three rate hikes this year (or two more in the remainder of the year). Policymakers stuck to their GDP forecast of 2.1 percent in 2017 and trend U.S. growth of 1.8 percent in the longer run.

For longtime Fed watchers, what may be most interesting about this latest Fed move is its seemingly sudden timing. As recently as February 24—a mere two and half weeks ago—markets priced only 40% odds of a rate hike at today’s meeting.3 The statement from the prior FOMC meeting on February 1 lacked a hawkish tilt and the minutes made no reference to “the next meeting.”4 Moreover, the tone of U.S. economic data has not been materially different. Incoming data has shown consumption to be on trend, investment data somewhat mixed, and inflation data relatively contained. If the current path of monetary policy is truly data dependent, then what inspired today’s move that left the Fed unmoved just six weeks ago?

We view this Fed move as largely opportunistic. The Fed is seeing widespread optimism coming from business sentiment and consumer confidence indicators, and solid investor sentiment that is apparent from financial market performance (Dow 21,000). For the last year and a half, the Fed has painstakingly laid the groundwork for a rate hike several meetings in advance—with the good intentions of not disrupting financial markets—only to have an external event cause a market disruption that sidelines their effort to renormalize rates. Since the last FOMC meeting, sentiment measures have projected a remarkably rosy outlook. With the March meeting close at hand, FOMC members floated the idea of a rate hike with hawkish language and, in this instance, markets readily priced in the move.

Looking ahead, it is critical to ask if this is the start of a significantly more aggressive Fed rate hike cycle. A look at the hawk-dove breakdown on the FOMC shows central tendency estimates ranging from three to four rate hikes total for this year,2 implying a federal funds rate of 1.50–1.75 percent by year end. This would leave interest rates exceptionally low by historical standards; over the last 40 years, at this stage in an economic expansion, the federal funds rate is typically over 5.00 percent.5 Looking out even further, the Fed’s own forecast shows rates at just 3.0 percent at the end of 2019!2

We continue to think the Fed will be gradual in its removal of policy accommodation, and that the key challenge facing investors today will continue to be the difficulty in finding income.

This article originally appeared on fsinvestments.com