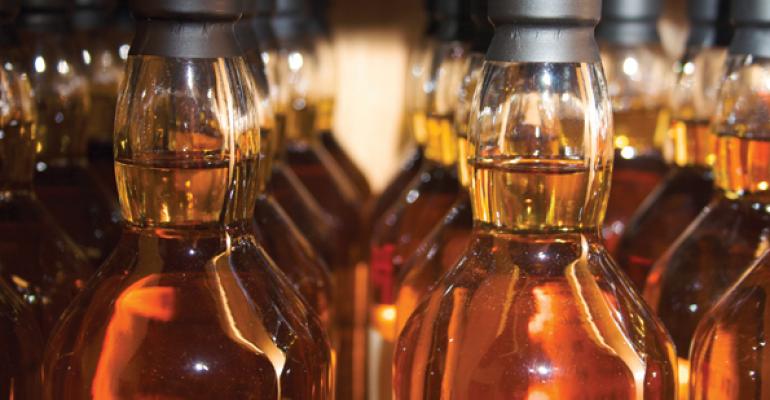 Talk about a liquid market.

Not as well-known a collectible as wine, auction prices for high-quality, rare whiskies are up sharply from as recently as 10 years ago. Consider: Christie’s 2007 sale of a single bottle of 1926 Macallan single-malt scotch for $54,000[DC1] ;

And like many collectibles appealing to a certain level of buyer, it shows little sign of abating. “The (price) trend for old and rare whiskies is still on the upswing,” said Joe Hyman, rare spirits specialist at Bonhams, which has held whisky auctions in Edinburgh since 2008 and New York since 2009.

In fact, the market has matured enough to make whisky a viable alternative investment. But make no mistake: This is a long-term holding, with many caveats. It is more complex than buying a case of 18-year-old Glenlivet at the liquor store and keeping it in the basement for 10 years. Consider it like art investing, say experts – buy it for the quality of the product first, and resale value second.

Andy Simpson, rare whisky consultant and founder of Whisky Highland, runs the Investment Grade Scotch index; started in 2008, the index collects sales data on 1000 bottles of investment-grade single-malt whiskies. It is up 170 percent since inception.

Simpson said several reasons are behind the rise – more information is becoming available on prices, making it easier to analyze values, demand in general for Scotch is growing globally and there are limited supplies of the best product. “No one can produce any more 1972 Macallan. You can’t go back in time, so it only gets rarer,” Simpson said.

Whisky investing is for people who want to take their interest in the “noble malts” to another level, says Nicholas Pollacchi, chief executive officer of tasting firm and brokerage, The Whisky Dog.

That means, think like a value investor. “I don’t tend to spend anything over $15,000 on one particular bottle,” Pollacchi said, whether he’s buying for a client or himself because it’s difficult to get a good return on investment on bottle that costly.

Like anything, the harder it is to find, usually the more valuable it is. Pollacchi said he looks for certain factors when deciding to buy a bottle. How big was the production run? A few hundred bottles of a few thousand? Was it created as a collectible? Is it from an old bottling or from a distillery that’s closed? All these factors will likely determine the investment potential, versus a brand’s readily available core line, he added.

While there are good whiskies from other countries like Japan, the bulk of the investment market is concentrated on iconic Scottish producers known for high quality, Simpson said, such as the top 20 distillers on the Whisky Highland Index. Macallan is at the index’s top, but some highly ranked lesser-known names include Brackla, Glenury Royal and Glen Grant.

Of course, quality is subjective, so collect something that’s enjoyable to sip. “It’s the market’s perception of the value of the whisky,” Simpson said. “One person’s investment today could be another’s drink tomorrow.”

Taste the whisky, if possible, because it varies by individual cask. “Age only tells you how old something is, not how good it is. If you have a bad spirit in a bad cask and age it for 40 years, it’s just a bad-tasting whisky,” Pollacchi said.

Like any market, certain brands are hot, and today, Macallan is the hottest, Pollacchi said, something a long-term investor should mind. A better value may be to find flavor profile of a hot brand and look for a similar profile in a lesser-known brand that’s seeing price appreciation, “a brand that hasn’t exploded into the luxury market yet,” he said.

Brands are highly aware of the popularity of high-end Scotch, the experts say, making value investing even more important. “Collectible” bottles are sometimes anything but, and overpriced whisky can crater. 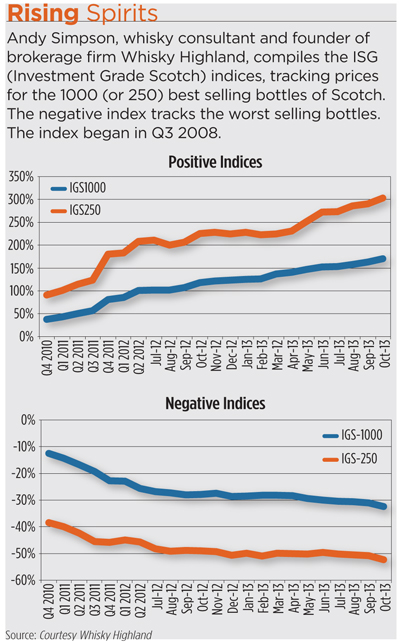 For example, Highland Park’s limited edition 50-year-old single-malt whisky, released in 2012, and packaged in a lavishly designed bottle. Only 275 were made, with an initial price of around $16,600 (at current exchange rates). It recently sold at auction for little more than half that, he said. Simpson cautions against being dazzled by a whisky that comes in ornate packaging; “Diamonds this, platinum that,” he says. “That's what people typically don't go for when they collect investment grade scotch.”

On the other hand, the first release of Balvenie’s Tun 1401, which only exists in 330 (traditionally packaged) bottles, cost $250 when sold at the distillery in 2010 and recently fetched $3,325 at auction.

Investors can build their own collections if they do their research. Start by studying prices. “Go in informed, otherwise go to Vegas and play roulette,” said Bonhams’ Hyman. If an investor is visiting Scotland, some distilleries have special editions for sale only there. Otherwise, look at the major auction houses, and there are several online scotch whisky auctions that pop up in quick internet searches. Finally some high-end liquor retailers will source limited editions.

For the more serious investor seeking a broker, ask how long they have been in the industry, what he or she will look for in the market, and why, Simpson said. Brokers should also be able to steer you clear of fakes, which is a growing problem in the high-end whisky market. “I have walked away from more collections of whisky than I’ve bought,” he said.

For the long-term investor, storage is important. Whisky is less finicky than wine, but Pollacchi recommended keeping the bottle upright, in the original packaging and out of direct sunlight and heat to avoid changing the color of the packaging and the whisky’s color.

Hyman said when collectors bring whisky to him for auction, he looks for the following: checking that the glass is of the period, any kind of date on the bottle, brand, tax codes or stamps on the label, retail market prices, if any, and recent auction activity.

“People buy whisky because there’s a mystique about it. It’s a passion-driven business and it’s still hand-crafted in the old-fashioned way,” Pollacchi said.

And of course, if the investment goes south, whisky brings its own consolation.

[DC1]Fyi, the most expensive was a $460,000 bottle of Macallan sold, for charity, but it was a special bottle in Lalique crystal, so not representative of the average market bottle, so I didn’t include it.